With his election to the American Institute for Medical and Biological Engineering (AIMBE) College of Fellows, biomedical engineering professor Kristen L. Billiar hopes to bring more attention to the work he and his WPI students are doing in the field of micro-mechanics of cardiovascular tissues–both in society at large and on Capitol Hill. 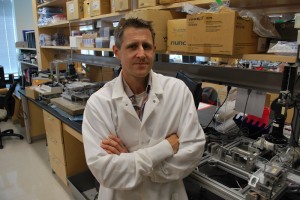 “Personally, it’s a great honor to be considered amongst the top in my field. Walking across the stage with people I immensely respect was truly one of the highlights of my career,” says Billiar, Head of the Biomedical Engineering Department.

It’s a call to action to tell the story of our research to society.
Kris Billiar

Billiar studies the effects of externally applied and internal (cell-generated) forces on cell behavior, matrix biochemistry, and the biomechanics of soft tissues and biomaterials. “The physical environment is very important in biology. If you change the stiffness or deformation of a tissue or implant, the biology of the cells is altered as well,” says Billiar.

While many similar types of professional awards honor past and present work, Billiar says the AIMBE award represents that, plus a call to action on two fronts. One is to actively lobby Congress to make representatives more aware of the impact of the BME faculty’s research on patients, the economy, and society at large. The other is to spread the word about his research to non-scientists in a way they can understand.

Compared to more established engineering fields, biomedical engineering is small, but the field is on the rise, says Billiar, noting that it’s one of the fastest-growing degree programs at WPI. His area of that field, mechanobiology, focuses on the how the cells’ mechanical environment affects physiology and vice-versa.

Billiar’s research applies connective tissue remodeling, repair, and disease, and specifically to heart valve disease. In the U.S. there are more than 300,000 heart valve replacements a year, he says, using either mechanical valves or bioprosthetic (pig) valves. Mechanical valves can last forever, but patients have to take anticoagulant medication the rest of their lives. Pig valves deteriorate over time, so the patient needs multiple surgeries to replace them.

Neither of these options offers a permanent solution for pediatric patients, however, because the valve does not grow with the child. Billiar’s ultimate goal is to engineer a heart valve that can replace a faulty one in a child, and then grow as the child does, avoiding multiple surgeries, and saving lives. He says achieving that goal is a long way off, however.

That’s why the AIMBE College of Fellows honor represents more than a nice line on his resume, he says. The organization made it clear that members should use their election to educate Congress and the general public about their field to increase funding, attract new students to the field, and help make the U.S. competitive.

“It’s a call to action to tell the story of our research to society,” he says.

He adds that the College of Fellows honor is special to him because the organization takes a holistic approach to science and engineering similar to that of WPI.

“People in the College of Fellows come from all areas–industry, academia, etc. The organization doesn’t have a bias toward one area or another. Biomedical engineering and why it’s important is the unifying force,” says Billiar.

“WPI recognizes that it’s not just about your research and how it can be used, but about educating the next generation and about service to the field.”