Be prepared: The WPI campus is about to be taken over by astronauts, all manner of robots, rovers, vacuum chambers—and, last but not least, Curious George. 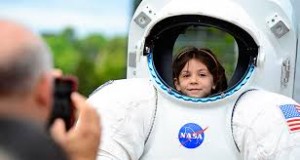 From 10 a.m. to 4 p.m. tomorrow, the campus will host its 5th annual TouchTomorrow, dedicated to exposing people of all ages to the STEM fields and all they have to offer.

The festival, which is organized by a dedicated committee of WPI staff, has been held over the past five years in conjunction with the NASA Sample Return Robot Centennial Challenge, and incorporates a wide range of hands-on events. According to Sjogren, attendance has grown in that time from around 6,000 to 10,000.

The main goal is to expose a broad range of people to what science, technology, engineering, and math have to offer to solve the world’s larger problems.
Stephanie Pasha

This year it will be held across the main campus and WPI’s locations at 50 and 85 Prescott St. Attendees can look forward to demo-ing video games; traversing an asteroid landscape; seeing advanced manufacturing technology at work; experiencing virtual reality chairs; trying on the Mark III suit; witnessing the impact of vacuum chambers; and watching the MARCbot IV rover.

Partners this year include PBS LearningMedia and WGBH Education, which will take over the Bartlett Center and offer hands-on activities for children from elementary to middle school age. Also planning to be in attendance? Curious George.

Other highlights this year will include the appearance of ABC “BattleBots” champion Paul Ventimiglia ‘12, who will provide a sneak peek at the robot he’ll be competing with on this year’s show. And retired astronaut Charlie Precourt of Waltham will discuss his exploits in space.

Ultimately, Sjogren says, it’s “inspiring to see a mass amount of young people just so excited about science,” whether they’re learning about wearable computers, creating geodesic domes, or building DNA models out of gumdrops and toothpicks.

Pasha agrees that “the main goal is to expose a broad range of people to what science, technology, engineering, and math have to offer to solve the world’s larger problems.”

She say the aim is to demystify the notion that the fields are too “difficult” to grasp and understand, and to get both boys and girls of all ages in “early, early, early—before anyone tells them they can’t do it.

“We hope to have a part in influencing future leaders,” says Pasha.

And there’s an app for that, too: Download a dedicated festival app for Android or iPhone/iPad—event attendees will receive discounts from several local vendors. Visit wp.wpi.edu/touchtomorrow for full details.