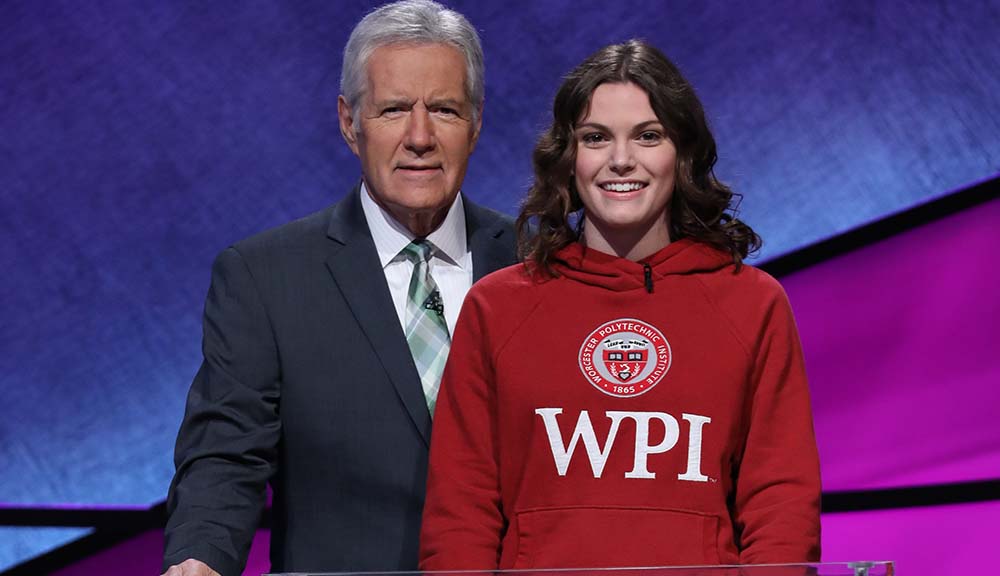 The BBT major will appear on Friday evening's broadcast

Alli Ross ’20 has had her sights set on being a Jeopardy! contestant since she was a child. The Shrewsbury resident took the online test for the television trivia program’s children’s tournament at the age of 10; she got an audition, but never got to compete on the show.

While a first-year student at WPI, she took the online test for the College Tournament; once again she got an audition, but was not selected. However, an audition held in Boston last November—comprising a second test, a mock game, and an interview—provided a breakthrough for the biology and biotechnology major. She was selected to represent WPI in the 2018 College Championship, which was taped in Los Angeles on March 12 and 13.

The “Jeopardy!” College Championship airs weeknights April 9 through 20 at 7:30 p.m. on WBZ-TV, Channel 4. Ross's appearance will be televised Friday, April 13. She sat down with the Daily Herd to talk about her experience.

How did you get onto the show?

This wasn’t the first time I had auditioned. I tried out for Kids Week when I was 10, and for the college tournament last year. It starts with an online test with 50 questions from different categories. You have 15 seconds to answer the question; you don’t have to answer in the form of a question. If you do well, you move on, but it doesn’t mean you’ll get in.

Then you do an in-person audition; mine was in Boston. There were about 30 people there for my session, which was one of several. You take another 50-question test partly to make sure you didn’t cheat the first time, and you go through a mock version of the game so [the producers] can see your confidence level, hear if your voice is loud and clear, that you don’t get rattled easily, things like that.

They coach you not to use extra words, like, “I’d like to have such and such for 200,” or “I’d like to try blah, blah.” It’s category, dollar amount, and move on, because the rounds are timed, and in this case, time is money. You’re literally wasting money if you’re not answering questions.

The last step is a personality interview so producers can get a sense of your personality, if you can laugh at yourself, if you have an embarrassing story to tell, things like that, because they want to make sure they have diverse people and that those people "make good television."

How did you prepare for your appearance on the show?

I love trivia in general, and I make it a habit to absorb every little fact around me. I made a concerted effort to learn all the world’s capitals before the audition. It was something that I wanted to do for myself anyway, and then when I got the call [to appear on the show], I had even more of a reason to really do it.

I also got for Christmas a long time ago a book called The Book of Useless Information, which actually has a use now.

Where did your interest in Jeopardy! come from in the first place?

My grandmother took care of me a lot when I was little because both of my parents worked, and she would turn on Who Wants to Be a Millionaire, The Price is Right, and Jeopardy!. Back when CD-ROM games were big, she had the Jeopardy! game, and I would play, at 9 years old, and get none of the questions right. I was frustrated, but I was motivated to learn those facts.

So, you must dominate at Trivial Pursuit.

Yeah, nobody wants to go up against me in trivia games.

How did you feel during taping? What was going through your mind?

I didn’t feel nervous at all. Everyone there [on set] made it so comfortable. They said, if you need anything at all, let us know, if you have trouble with the buzzer tell us, and during the commercial breaks they would give you strategies on how to improve. Everyone was there to make it the least stressful environment possible, given the stakes. I really enjoyed every second there. At the time, it felt like this was where I was supposed to be. I felt so in place, I didn’t feel this crazy out of body experience, which was cool.

The words that I would use to describe him are “surprisingly quick-witted.” He only comes out for the taping, and then goes back into his dressing room. We didn’t see him until it was time to film. He didn’t do the dress rehearsals, so when he came out on the show, it was the first time any of us saw him.

This is probably going to be the number one story I end up telling: During commercial breaks, if he doesn’t have to re-tape any of his clues (sometimes he reads the wrong clue or stumbles over his words, and they have to re-tape them) he’ll take questions from the audience. During Day One of taping, someone asks him “Boxers or briefs?” And, completely deadpan, Alex looks back and says, “thong,” and walks away. He’s in his late 70s, and seems stuffy, intellectual, and yet he was so off-the-cuff. He will banter back and forth with contestants, but he doesn’t really hold back; he’s not afraid to be a funny, engaging human being.

Alex also does a face-to-face interview with each contestant, and I had to work hard and make sure not to crack under pressure. He comes out, and then the contestants have a conversation about the anecdote he picked to talk about on TV.

What was your anecdote?

I talked about the summer job I had last year at the EcoTarium in Worcester, where I worked with a porcupine on painting. So basically, I taught a porcupine how to paint, is how Alex phrased it. It was a fun conversation.

Wait, you taught a porcupine how to paint?

Yes. At the EcoTarium, one of the things we do for enrichment with the animals is painting. With some animal species it doesn’t work, but with others it does. Sgt. Pepper, the porcupine, has hands and he can grasp things. We can give him a command, “take,” he takes the paintbrush, and we hold up a canvas, and he waves the paintbrush around a little bit, and we move the canvas accordingly.

The paintings make cool souvenirs. I actually have one hanging in my dorm room. They gave one to me as a going away present on my last day of work.

Wow! Back to the game – what was the wagering process like?

Wagering strategies are a big hot topic in online Jeopardy! forums. I didn’t look too much into that, because I didn’t want to psych myself out.

I will say that wagering and waiting for Final Jeopardy! was probably the most nerve-wracking part, because unless you run away with the game, it comes down to Final Jeopardy! if the scores are even remotely close. Getting Final Jeopardy! is one of the most satisfying parts of the game because the clues are the most puzzle-like.

What is your dream Jeopardy! category?

Harry Potter would probably be my #killercategory, because I’ve read those books and seen those movies basically to the point where they’re burned into my brain. And Marvel super heroes, which is another category I love.

What tips or advice would you give to some someone who is considering auditioning for the show?

Pay attention to everything. Someone might call it nosy, or eavesdropping, but I don’t know, anytime anyone says anything about pop culture, or news related, I make an effort to listen and pay attention. Also, look at some big things that you know may come up: Literature, authors, and book titles are big; movies and pop culture; just being aware of everything you can. You never know what could show up.

The buzzer is another thing I would advise people about. I recommend practicing the buzzer. I practiced with a retractable pen. It’s a Jeopardy! pen, and the button for retracting the pen tip is big and red, meant to mimic the actual size and shape of the buzzer, for people who do want to practice. I’d hold it, watch Jeopardy! and click, click, click, click, click after each question.

Several people on the show also suggested practicing with a toilet paper tube holder. You know the compression thing you use to put the toilet paper roll in? They say that mimics the springy feel of the buzzer pretty well, and so I did that for a bit to get a feel for it. They also tell you that you don’t have to keep your thumb up and press down to buzz in; have your thumb on that buzzer so you can just immediately press down.

And don’t buzz only once—milliseconds matter. There are lights behind Alex that light up when he is done reading the clue, [contestants can see them but the audience can’t], and that’s when you know you can start buzzing in. The lights flash on and off for imperceptible amounts of time. If you’re really good, you listen to the clue, and during that instantaneous pause after Alex finishes reading, and just before the lights go on, that’s the sweet spot, and you can beat everybody else. You don’t want to buzz too early, because you get locked out for a quarter of a second, and that quarter of a second is a huge amount of time when people’s reflexes are on fire. … Buzzer strategy is everything.

Setting Her Sights on Semifinals

Alli Ross won her quarterfinal round on April 13, earning nearly $20,000. Tune in on Wednesday, April 18 to see her compete in the semifinals against students from Georgia Tech and Brown University.