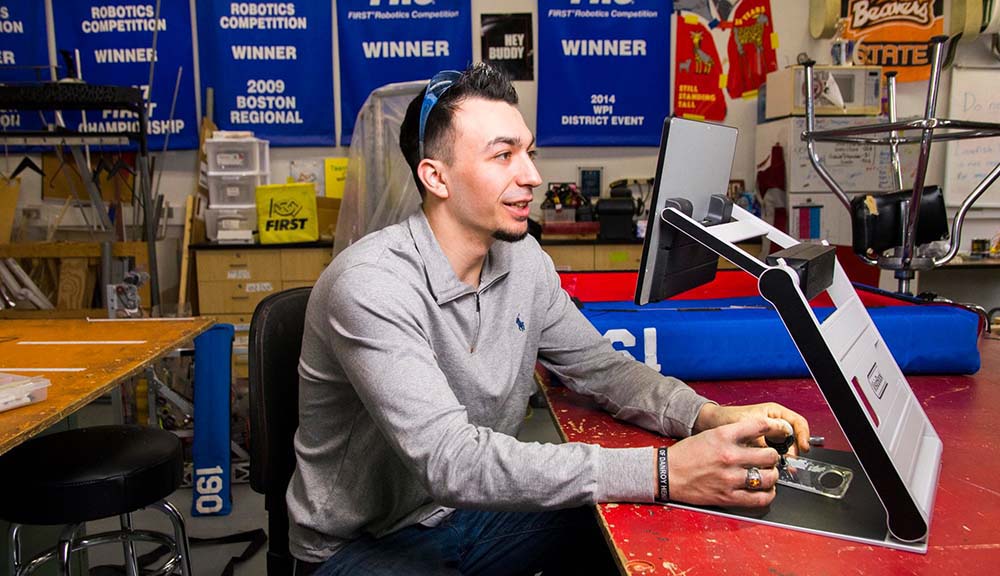 Inspired by Dean Kamen to enroll at WPI

Jack Duffy-Protentis '20 was in third grade when he was given the news he had a degenerative eye ailment that would severely limit his vision for the rest of his life.

His first reaction was far from devastation or mourning.

“There was almost a sense of relief because I thought I was dumb,” he jokes. “Now there was a legitimate reason why I could not read and write.”

​Duffy-Protentis, now a 20-year-old sophomore at WPI, was diagnosed with a rare, degenerative retinal disease called Stargardt disease (juvenile macular degeneration). He has no central vision, only peripheral vision. The disease will only worsen as he ages and there is no cure or treatment.

Despite this challenge, Duffy-Protentis leads a full life inside and outside the classroom with a keen interest in robotics and engineering; he was recently awarded a $2,500 Joseph Roeder Assistive Technology Scholarship. He says the award will help pay for his schooling.

“This particular scholarship was developed in memory of Joseph Roeder, who developed great adaptive technology for visually impaired students like me. Given how much I depend upon technology, it was an honor to be awarded the only scholarship in the country,” he says.

Living with Stargardt disease means learning what you can and can’t do while still pushing the limits of adaptability, he explains.

“I can navigate my environment but [the challenge is] reading, writing, and facial recognition,” he says. He uses a closed-circuit television app to help with reading and software (such as Dragon) to help with writing. Scribes will also write down what he says.

“I’ve had some internships that have allowed me to do what I’m good at,” he adds.

What he is good at are hands-on tasks and using software that allows him to design and use 3D manufacturing equipment to produce tools and other items, as well as design larger projects like the shed he plans to build this summer to house, among other things, his dirt bike and Quadrunner.

Duffy-Protentis explains that riding, as well as skiing and snowboarding, are skills he’s had his whole life and has found ways to continue those pursuits even with his limited vision.

“My dad realized I would not be able to drive legally and I’ve always been a car guy. So, he got me into riding (dirt bikes and Quadrunners) to sub in for driving and keep me involved with what I like to do,” he says.

His tactile skills in mechanical applications sometimes gives him an advantage over his friends when working on an engine.

“They will call me over when they can’t see the bolt so I’ll feel the bolt. I can fix parts without looking at them,” he says.

“I envision a life where I am not held back by my visual impairment. I hope to own and operate my own engineering firm, and know that my education at WPI will greatly help me in that endeavor.” -Jack Duffy-Protentis

His interest in engineering and robotics started at a very young age.

“After attending a FIRST robotics New England regional at Boston University at the age of 7, I knew I wanted to be an engineer,” he recalls.

Seeing thousands of students try to tackle various engineering and robotics problems in different ways appealed to him even before he was diagnosed with Stargardt disease.

At Oliver Ames High School in Easton, Mass., he joined the FIRST (For Inspiration and Recognition of Science and Technology) Robotics team and was the captain his junior and senior year.

“I actually helped take us to the national competition in St. Louis,” he says. Some of the projects his team worked on included a Frisbee-throwing robot, a defensive ball-blocking robot, a forklift, and a ball-launching robot.

Going to WPI to pursue his interest in robotics and engineering was a natural and ambitious move.

“With WPI's prestigious reputation, I knew that WPI could give me the quality education I needed to become an engineer. It was a very obvious, fast decision for me once I found out that I was accepted,” he says.

Duffy-Protentis cited the unique opportunities that WPI provides its students. During B-Term, he was enrolled in ES 1310, Introduction to CAD. He was delighted that students have the opportunity to take the SolidWorks exam for certification. He is proud of receiving a perfect score and is now “SolidWorks certified.” The exam was set up and proctored by his CAD professor, Mehul Bhatia. “I think it was the first time that a professor watched me operate a 3D software program like SolidWorks and he was really bowled over by my ability to navigate the system given my disability,” he says.

Rather than pursuing a job in an engineering firm, Kamen blazed his own trail by finding products or applications that needed to be built—and then doing it himself, Duffy-Protentis explains. Some of those products include a mobile insulin pump and the Segway scooter.

The sophomore is already part of a group of students trying to develop and design adaptive technology while he continues his education for the next three years. (He is on a reduced course load because of his vision and his dyslexia, something discovered when he started learning braille in third grade.)

Ever the planner and doer, Duffy-Protentis has his future mapped out.

“I envision a life where I am not held back by my visual impairment. I hope to own and operate my own engineering firm," he says, "and know that my education at WPI will greatly help me in that endeavor.”