Seven big recycling and trash stations, with colorful signs that show where to put your trash, made their debut last week in Gordon Library. They’re part of a campus pilot to improve recycling and reduce cost and waste.

WPI’s library is one of the most heavily used buildings on campus, with over 15,000 visitors a week, long hours, and food service! Despite best efforts, Gordon Library has had a poor history of recycling. Putting their heads together, the Office of Sustainability, Facilities, and the Gordon Library came up with the big bins pilot:  each big bin replaces multiple distributed bins.

Each big bin saves custodial costs; but even more important, it involves building users personally in sorting their trash, using clear graphics that educate them about recycling at WPI.

Research and experience at other universities finds that big bins, placed in central areas, are actually more effective in encouraging recycling than many small bins. The pilot was organized through the tremendous efforts and support of Terry Pellerin, Liz Tomaszewski, and Diane Begreen.

The launch was celebrated with a ribbon cutting (a recyclable cardboard ribbon of course!) and brief remarks by Prof. John Orr, Director of Sustainability. 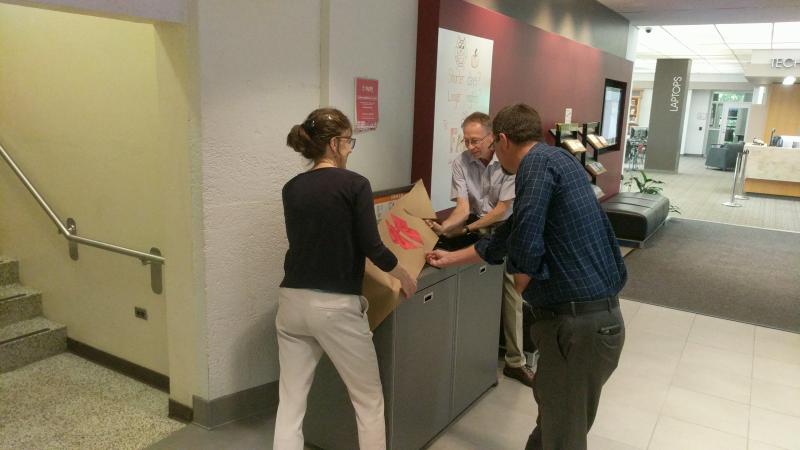