Natalie Farny, assistant professor in the Department of Biology and Biotechnology, has been awarded a $499,213 grant from the U.S. Environmental Protection Agency to determine how natural microbes interact with and influence the survival of genetically engineered microbes in soil. 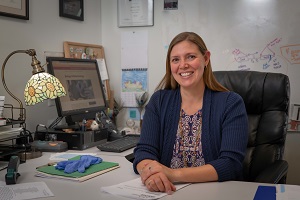 Farny’s three-year project will develop new laboratory models so that scientists can better predict microbe interactions and determine whether natural soil microbes could be used as “bio-controls” for genetically engineered organisms.

Her project was one of five research initiatives awarded EPA grants recently to assess the health and environmental impact of biotechnology products. It also builds on Farny’s previous research using soil microbes and a genetically engineered version of the bacteria Pseudomonas putida, or P. putida, to detect buried landmines.