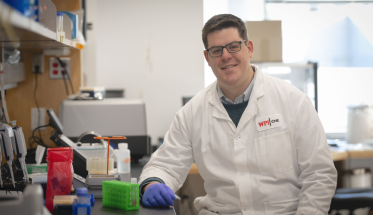 Yeast and Fungi Could Speed and Ease Genetic Engineering? WPI Chemical Engineer Receives More Than $2 Million in Grants to Investigate

A Worcester Polytechnic Institute (WPI) chemical engineer has received four separate grants totaling more than $2 million to support his research into using yeast and fungi to take on significant genetic engineering challenges. Through his research in synthetic biology, Eric Young, the Leonard P. Kinnicutt Assistant Professor of Chemical Engineering at WPI, aims to engineer organisms to make it easier to develop numerous products, like medicines, biofuels, and plastics, and increase security by developing a new method to detect hidden underground explosives.

“I am thrilled,” said Young, “These grants mean we can really push the boundaries of genetic design. They point to the promise of using yeast and fungi, already essential components of civilization, in new and creative ways to solve some of the toughest problems facing us today.”

Young recently received the National Science Foundation’s (NSF) prestigious CAREER award, which recognizes early-career faculty who have the potential to serve as academic role models in research and education. The five-year $512,591 grant supports his research on using Xanthophyllomyces dendrorhous, usually referred to as red yeast, as a new synthetic biology host, which is a base organism scientists begin the genetic engineering process with. Generally, only two organisms—baker’s yeast and E. coli—are used as hosts. That slows down or inhibits the creation of many products that are based on organic compounds that aren’t easily created by these two organisms.

Synthetic biologists are able to use baker’s yeast or E. coli to produce biofuels, medicines, nutrients, and renewable plastics, but they may not be able to produce enough of it or produce it fast enough to scale the process to make it commercially available. While Young's research with red yeast will create fragrances and flavors, and not specific medications, he will do the foundational research into how to use red yeast in synthetic biology so other scientists will be positioned to use it to make medicines.

“Red yeast will make creating certain products easier and faster because of its natural metabolism,” said Young. “The synthetic biology field has largely been focused on E. coli and baker’s yeast, but that hasn’t resulted in really good production hosts. Our big idea is to use red yeast as our host because it naturally produces terpenoids, a type of chemical found in many products but difficult to create with E. coli and baker’s yeast. By using synthetic biology, we can engineer red yeast to more easily produce what we need. But there is no foundation in place for synthetic biology of red yeast, so I’m going to create one. When we make the engineering easier, it’s ultimately possible to make more kinds of products and to mass produce them.”

Young also has received a two-year $719,994 grant to support his research using fungi as sensors to create a new method for detecting buried explosives. The grant is part of a $1.8 million grant awarded to Raytheon BBN Technologies by the Defense Advanced Research Projects Agency (DARPA),  the emerging technology development arm of the U.S. military. Natalie Farny, assistant professor of biology, is collaborating on the project.

The researchers will help develop a prototype for a bioreporter that will act as a subterranean surveillance system. They also are developing a system to test the bioreporter.

Young will use natural filamentous fungi to facilitate communication between two bacterial strains, engineered to detect bombs, to monitor underground areas for explosive materials, such as TNT. Fungi grow in the soil in continuous root-like networks that create paths through the soil called fungal highways. The first bacterial strain being developed will follow that fungal highway into the ground where it can detect the presence or absence of explosive materials. If the strain detects explosives, it will send a signal along the fungi to travel up to the surface, which will cause the second bacterial strain to produce a glowing light. Remote cameras or unmanned aerial vehicles can be used to survey large areas for the warning fluorescence. “Using fungi and bacteria to detect underground explosives is thinking out of the box,” said Young. “Using these fungal highways could be a game changer.”

“These bacterial interactions with fungi are only just beginning to be studied,” said Young. “These fungal highways are amazing examples of these interesting interactions because they allow bacteria to travel through the soil. It’s really a fascinating process that we think we can use for long-range signal transmission.”

The interdisciplinary team will use machine learning and natural language processing tools to automatically create connections between data repositories and to extract information from publications.

“The quantity of data and the publications generated in synthetic biology are growing but the data is not readily accessible to scientists,” said Young. “We’re creating a knowledge base with a single interface that will transform the way researchers access needed information. It will save researchers valuable time, accelerating discovery and innovation by enabling researchers to learn from others’ past experiences and make better synthetic biology designs, especially in the new synthetic biology hosts we are working with in our other projects.”

Young received his fourth recent grant—a two-year award for $580,500—from the Massachusetts Life Sciences Center to collaborate with Intellia Therapeutics, Inc., a biotechnology company based in Cambridge, Mass., to revolutionize the production of a component essential for genome editing approaches. For new genome editing technologies, scientists often use recombinant adeno-associated virus, or rAAV, which are small viral vectors that can be used to deliver the therapeutic gene sequences. One of the problems with rAAV is that production is slow and costly, creating a bottleneck for biomanufacturing of the virus.

The WPI researcher is working to produce rAAV with engineered yeast, which is faster and easier to grow than standard rAAV production cells, speeding the process and potentially reducing costs for future genome editing treatments.

“The bottleneck is a significant barrier to growth and progress, an unacceptable delay for potentially lifesaving treatments, as well as a damper on the economic potential of genome editing approaches,” said Young. “It is essential that manufacturing processes are improved, in order to speed the development of treatments for people with life-threatening genetic diseases. Increasing the production speed of rAAV with synthetic biology has the potential to also reduce cost and production times while increasing supply.”