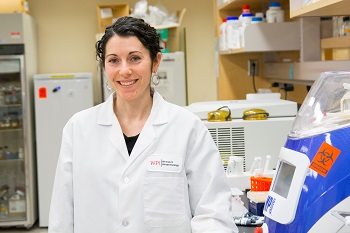 Scarlet Shell, associate professor in the Department of Biology and Biotechnology, has been awarded $394,660 by the National Institutes of Health to determine the role that small pieces of genetic material play in the severity of lung disease caused by Mycobacterium abscessus, an antibiotic-resistant pathogen.

Shell, principal investigator on the two-year project, will focus on a small segment of RNA, or sRNA, in M. abscessus known as B11. When B11 is absent from M. abscessus, the bacteria become more lethal.

“M. abscessus infections are particularly serious in patients with cystic fibrosis, an inherited disorder that damages the lungs, yet little is known about the physiological workings of the pathogen,” Shell said. “To develop better therapies, researchers need an improved understanding of M. abscessus and its molecular activities.”

Dr. Daniel Barkan, a physician who is an associate professor at Hebrew University of Jerusalem in Israel, is co-PI on the project.

The researchers will determine the role of B11 in the virulence of M. abscessus, which may involve the pathogen’s secretion system. They will work with Mycobacterium smegmatis, a model organism, to hunt for proteins that act as “chaperones” for sRNA in mycobacteria. In addition, the researchers will analyze B11 in samples from patients in two Israeli hospitals with large cystic fibrosis units.

Shell focuses her research on the regulatory mechanisms that allow mycobacteria to respond to and survive stressful conditions. She is also assessing the medicinal herb sweet wormwood for compounds that may work against the bacteria that causes tuberculosis.