Newly published research led by Jagan Srinivasan, associate professor in the Department of Biology and Biotechnology, shows the complex role that specific neuropeptides and neuropeptide-receptor modules play in the behavioral response of the tiny worm C. elegans to a pheromone that attracts males.

Neuropeptides are short proteins that are released by neurons to regulate the way other neurons respond to other neural signals, such as the neurotransmitters dopamine and serotonin.

The article, “Distinct neuropeptide-receptor modules regulate a sex-specific behavioral response to a pheromone,” was published Aug. 31 in Communications Biology.

Srinivasan provided a summary of the work: 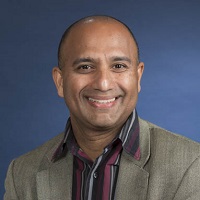 The colorful display of a peacock’s tail. The courtship dance of a fruit fly. There are many displays and interactions by which animals find, attract, and woo mates. But what about animals that lack ears and eyes? How do they accomplish this?

Nematodes are ubiquitous, near-microscopic roundworms that are present throughout the world in soil and water. But how do these worms, which cannot see nor hear, find mates? Pheromones.

Humans utilize pheromones to influence interactions, too. But for the roundworm, pheromones are their nearly sole form of communication. The worms use a complex cocktail of chemical signals to convey information ranging from their biological sex and receptivity to the availability of food, population density, and their life history.

The roundworm used in the lab to study these communications, Caenorhabditis elegans, or C. elegans, is largely hermaphroditic, with individuals capable of self-fertilization. A small percentage, less than 1 percent of the population, is male. Although this may seem an insignificantly small portion of the C. elegans population, this is where genetic diversity arises, allowing for evolution and adaptations to an ever-changing world.

Our lab aims to understand how C. elegans communicate using these signals, and how males and hermaphrodites differ in their responses. Reilly, formerly a graduate student in the lab, investigated the mechanisms by which male worms respond correctly to a mating cue, leading to the new findings in Communications Biology.

It was an honor to be a part of this ground-breaking research as an undergraduate at WPI. The opportunity prepared me well for my career and motivated me to continue learning and growing as a researcher!
- Emily J. McGlame ‘18

The cue, abbreviated as ascr#8, is released into the environment by fertile sexually mature hermaphrodites in the hopes of attracting any nearby males. We have previously shown that male C. elegans sense this cue and enact a search behavior that we quantify through the time the male spends within ascr#8.

In the new study, Reilly showed that this response is regulated by a specific neuropeptide called FLP-3. Neuropeptides are small proteins produced and released by neurons through the regulated secretory route and act on neural substrates or other tissues.

FLP-3 peptide is active only in males to regulate the behavioral response to the mating pheromone. In mutant animals that do not express the gene encoding the FLP-3 peptides, males avoid the pheromone just as hermaphrodites do.

Using CRISPR/Cas technology to generate new mutants for proteins that act as receptors detecting FLP-3 peptides, we determined that two receptors are involved in sensing the FLP-3 signal. Even more interesting, the two receptors are not evolutionarily related.

How did we know to look at those receptors? Reilly initiated a collaboration with Professor Isabel Beets, a faculty member at KU Leuven. Beets is a world leader known for spearheading an initiative to “deorphanize” every receptor in the C. elegans genome. Her laboratory determined that the peptides encoded by the FLP-3 gene are extremely specific in their activation of the two unrelated receptors, termed NPR-4 and FRPR-16.

I learned so much about the trial and error and many iterations that go into novel scientific discoveries. Outside of the neuroscience, there was so much innovation behind the scenes to get to this novel conclusion.
- Haylea T. Northcott ’19

What we found was surprising.

First, the new technique worked! We are currently applying for a patent on the method as a way to bypass traditional “gene rescue.” Second, only two of the FLP-3 peptides were involved in the pheromone response. Both peptides contained the amino acid threonine in a specific position.

To test the importance of the threonine, we engineered an inactive FLP-3 peptide, which normally has no effect on a worm’s behavior, to contain the amino acid. The peptide became active, confirming that threonine is vital.

What does it mean that a single amino acid is able to determine the neural pathways that are active when microscopic nematodes sense a mating pheromone?

Roundworms are crucial for soil health. If researchers could better understand the neural responses of nematodes, they could engineer products to address unwanted soil nematodes. Plant-parasitic nematodes are a major threat to different crops worldwide and having the ability to stop their reproduction could enhance agricultural produce, creating a better global economy.  These findings could also help with the development of medical treatments for humans infected with tapeworms or hookworms.