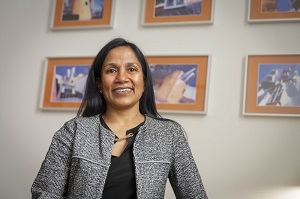 New research led by Reeta Rao, professor and interim head of the Department of Biology and Biotechnology, shows that two yeasts derived from food secrete alcohols that inhibit the fungus Candida albicans, a pathogen that can infect humans.

The findings, published in the journal mBio, suggest that the yeasts Saccharomyces cerevisiae and Issatchenkia occidentalis inhibit virulence of C. albicans and therefore have the potential to be used as probiotics, Rao said.

“C. albicans lives naturally in the gut, but the fungus can also cause thrush and vaginal infections,” Rao said. “If the fungus enters the bloodstream, it can cause serious infections and death, and the few prescription treatments that exist have side effects that range from headaches to liver toxicity. The yeasts S. cerevisiae and I. occidentalis represent an important opportunity to address C. albicans infections without drugs.”

Rao’s research showed that the yeasts S. cerevisiae and I. occidentalis secrete the aromatic alcohols tryptophol and phenylethanol, which stopped C. albicans from adhering to human gut cells. Tryptophol and phenylethanol also prevented the filamentation of C. albicans, a process that leads to elongated fungal cells that can invade tissue, escape the body’s immune cells, and contribute to biofilms that are difficult to eradicate.

The study builds on Rao’s previous and ongoing research into potential treatments for fungal and bacterial pathogens, how good bacteria can act as a probiotic against infection, and how virulent fungi

Researchers from the Central Food Technological Research Institute and the Academy of Scientific and Innovative Research in India collaborated with Rao on the article.