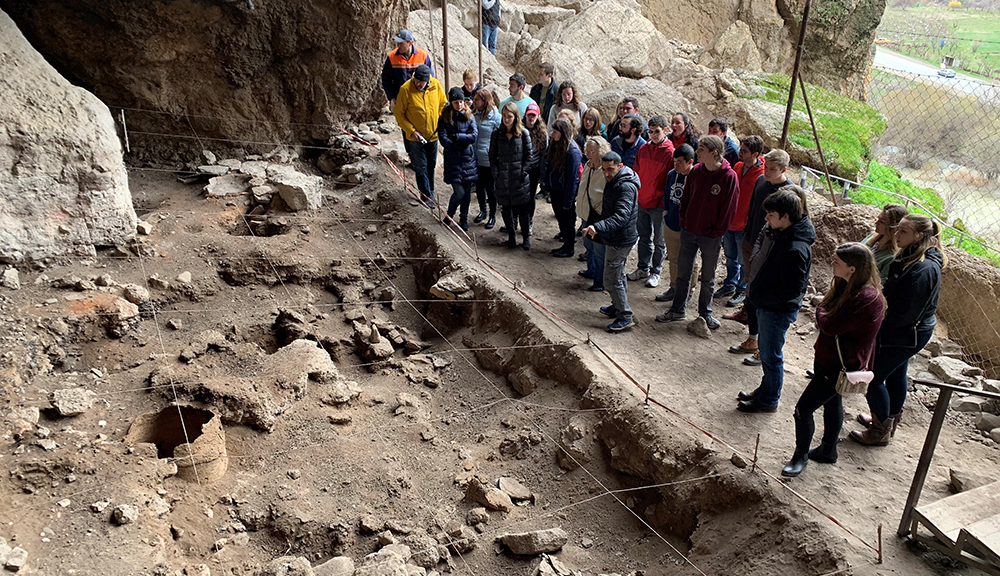 Archeologist Boris Gasparyan (center) guides a tour of WPI project students at the Areni Cave excavation site in Armenia, dating back 6,000 years, where the first evidence of wine making was discovered.

Students from the American University of Armenia (AUA) are taking courses at WPI this term in preparation for integrated project team work they will do with WPI students, who will travel to the Armenia Project Center in the spring term. 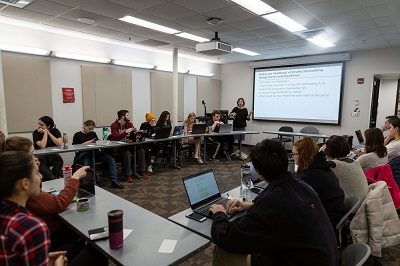 Paula Quinn, associate director, Center for Project-Based Learning and adjunct instructor, Interdisciplinary & Global Studies Division, is the instructor for the social science methods prep course WPI students are taking before going to Armenia to work on their projects.

“This is a new approach to student projects that’s significantly different from the way it’s typically done,” she says.

Aghajanian recalls that he had valuable mentors in his “learning and earning” phases, and he aims to be a good mentor himself. “This is not an original idea, but I see my life in three stages: learn, earn, return,” he said.

What: Learn about the WPI Armenia Project Center and hear from students about the projects they will take on there in the spring. Project center director Michael Aghajanian will share his vision for the future of this program.

“While the opportunity seemed obvious, the way to make it happen was a mystery,” he says. “That all changed when I met Diran Apelian (professor and former director of WPI’s Metal Processing Institute) and shared the idea with him. He had been thinking the same thing for many years. Diran focused on gaining support within WPI and I focused on establishing the infrastructure in Armenia.”

In 2017 the pair conducted a successful pilot on two projects with eight WPI students, sharing the advising responsibilities.

“One of the teams won the President’s IQP Award,” Aghajanian says. "We spent most of 2018 establishing the Armenia Project Center in IGSD (Interdisciplinary and Global Studies Division) and launched our first full cohort in 2019.”

Building a strategic alliance with AUA

Aghajanian says each time WPI completed projects in Armenia, it generated excitement and a good amount of positive momentum in the Armenian community. But when previous projects were completed, students and advisors would go home—momentum would cease until a new team arrived again a year later. “Obviously, that model is sub-optimal," he says. "The current model also limited us to projects that could be completed in seven weeks or could be done in annual spurts of seven weeks each.

“If we were going to generate and maintain excitement and momentum and tackle real, complex issues, we needed a partner on the ground in Armenia,” he says. “AUA seemed like it would be a good partner and we set out a strategy to get to know its faculty and share with them what we were all about.”

WPI established a relationship with some of the deans and faculty, sharing ideas during weekly status update sessions at AUA that also provided insight into the IQP program.

They then broached the idea of a pilot consisting of eight AUA students working with 16 WPI students on integrated teams. Although it might sound simple, Ahgajanian says, there were administrative and organizational challenges to make it happen. Aghajanian and Apelian shared the concept and rationale with WPI Provost Wole Soboyejo, who was supportive of the idea.

“Also, as luck would have it," says Soboyejo, "the new president of AUA, Karin Makides, was in southern California in the summer of 2019, and I used some contacts to arrange a meeting with her to share the concept.”  Despite challenges associated with launching a strategic alliance, Makides was intrigued by the idea and supported the initiative.

“The AUA students will get all of the benefits the WPI students get from working on their IQP,” Makides says. “They will be able to take classes that will advance their skills in their major area of study or some other area of interest. In addition, they will get an experience in the U.S. and establish what we hope will be lifelong friendships.”

While the AUA students will get the benefits of working on an IQP and leveraging courses at WPI, the WPI students will be able to work on projects that require them to travel outside the capital city of Yerevan, says Makides, and “really engage with Armenian society.”

“The project involving Poverty Stoplight will require the students to travel to a small village in Armenia to conduct the poverty assessments,” he adds. “We never would have allowed that without the AUA students’ involvement. The same is true for the Armenian Eye Care project, which will require the students to travel to remote locations to observe the operation of the mobile eye hospital. Again, this would not be possible without the AUA students. Overall this is a big win-win.”

Unique connection in the Worcester community

Professor Aaron Sakulich, one of the Armenia project advisors, said that an opportunity like this is a prime reason he became a faculty member at WPI. “At some point, almost every project center director proposes a student exchange with a local university,” he said. “In my circles, the Bangkok Project Center is highly regarded because of the recognition that having U.S. students partnering with local students leads to not just excellent projects incorporating local knowledge, but to the students from both countries learning a lot about each other.”

Sakulich expects the same will happen with the Armenia Project Center—with the added benefit that Worcester has a very large Armenian diaspora population. “So the projects will be better, the students will learn more, and there is a unique connection right here in the Worcester community,” he explains. “I know that the Armenian students here this term were interested to know that some of the oldest Armenian communities in the U.S. are in Massachusetts.”

"The Armenian Church of Our Savior (in WPI's neighborhood) has hosted both U.S. and visiting Armenian students," he says. “We've been to the Armenian Museum in Watertown and we've gotten a lot of great support from people like [former dean of arts and sciences] Karen Kashmanian-Oates and Diran Apelian,” Sakulich adds. “There's just huge excitement over the center. It's really hard to overstate what a good experience this will be for all students involved.”

Sharistan Melkonian, dean of general education and director of accreditation and assessment at AUA, who is originally from Worcester, hopes it is the start of a long-lasting partnership.

“It is a fantastic opportunity for students and faculty from both universities to work together and learn together," says Melkonian, "and a great chance to bring together different perspectives, working on different ideas and delivering solutions. "The partnership has fostered tremendous potential. Today, AUA and WPI students are engaged in a unique opportunity to learn and work together complementing each other’s experiences, and ultimately engaging in projects here in Armenia. Faculty from AUA and WPI are working, teaching, and learning together. And, of course, we are hopeful that the projects that the students will engage in here in Armenia will lead to greater awareness, commitment and resolve toward solving our societal challenges in Armenia and beyond.”