WPI Student Athletes of the Week

Brian Amato of the wrestling team has been honored as the WPI Male Student-Athlete of the Week for the week ending Sunday, Nov. 23. The sophomore from Newington, Conn., made his season debut after a preseason injury and did not disappoint in WPI’s home tri-meet sweep of Southern Maine and Norwich. Amato, ranked first in New England at 125 pounds, defeated the third-ranked wrestler from USM 12-6 in a bout at 133 pounds in WPI’s 33-13 team win. Amato came back and scored a 17-1 technical fall over his opponent at 125 pounds in the Engineers’ 26-12 victory over Norwich. 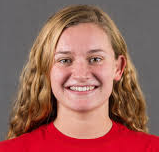 She also teamed up with Emily Martin, Tori Claverie, and Amanda Konieczny to post a second place finish in the 200-yard freestyle relay (1:42.30).