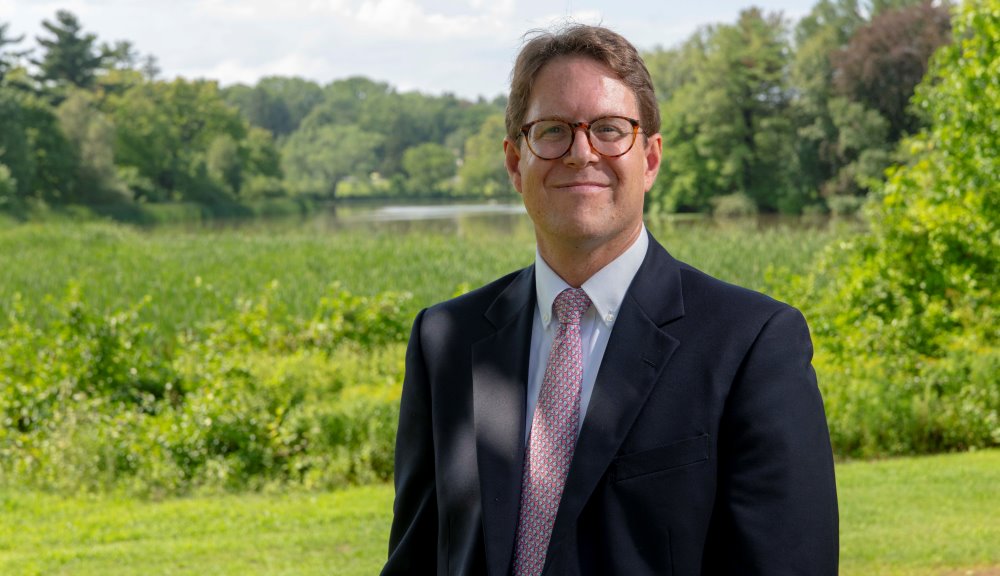 Harold W. Walker has been named the new Alena and David M. Schwaber Professor of Environmental Engineering at Worcester Polytechnic Institute (WPI). Walker, a widely recognized authority on water treatment, comes to WPI from Stony Brook University, where he was the founding director and chair of the Department of Civil Engineering.

“We are delighted to welcome Hal and his family to WPI,” said WPI Provost Bruce Bursten. “His expertise in the environmental engineering of water and his leadership experience will add greatly to our impact on multiple fronts. He is a superb representative of the vision that David and Alena Schwaber expressed in their generosity in establishing the Schwaber Professorship in Environmental Engineering.”

“Hal Walker brings with him a rich experience in environmental engineering and engineering leadership to WPI,” added WPI’s Dean of Engineering Winston Soboyejo. “His work on wastewater treatment will also deepen the impact of our research at the interfaces between environmental sciences, engineering, and policy. We are very happy to welcome him to WPI.”

Walker’s research focuses on developing treatment technology for wastewater and drinking water. Specifically, he explores novel technology for  removing emerging contaminants—chemicals, such as pesticides, pharmaceuticals, and nanomaterials, that

have been detected in drinking water supplies at trace levels, but whose health risks are not yet fully known.

For example, Walker is researching the best way to treat drinking water containing 1,4-dioxane, an organic compound similar to ether and a likely carcinogen. Used in solvents and detergents, the compound is increasingly being found in drinking water around the United States. Tests have shown that more than 7 million people in 27 states are served by public water systems with levels of 1,4-dioxane above what the Environmental Protection Agency considers to be likely to increase cancer risk, according to a report by the Environmental Working Group.

Walker also has focused on removing nutrients, like nitrogen and phosphorous, from wastewater. Excess levels of nitrogen and phosphorous, which can come from sewage treatment plants and septic systems, detergents, and fertilizers, can have a variety of negative effects on waterways, including stimulating toxic algae blooms and the overgrowth of plant life that can lead to low-oxygen “dead zones,” while the byproducts of toxic algal growth can sicken animals and people. Walker is testing several approaches to remove or, ideally, recover nitrogen, which can be used to make fertilizers, dyes, and nitric acid. For example, at a number of field sites on Cape Cod and Long Island, he is currently investigating an innovative prototype that utilizes ordinary woodchips to transform nitrate in wastewater into harmless nitrogen gas.

He has been working for about a year to develop new membranes from plant-based, nano-sized cellulose fibers that can trap various kinds of waterborne contaminants. Unlike traditional petroleum-based membranes, plant-based membranes are renewable and sustainable. The natural properties of cellulose make the membranes “superhydrophobic,” which greatly reduces the potential for membrane clogging.

“I grew up in California,” said Walker. “My father was a commercial fisherman so I spent a lot of time around water. It’s such a vital part of life and there are so many global challenges with water availability and water quality. It has a critical impact on global health. There’s a huge need for better and more economic approaches to dealing with our drinking water and wastewater.”

He said one of the reasons he was attracted to WPI is the university’s focus on encouraging students from different academic backgrounds to collaborate on research projects.

“I’ve always known about WPI, but my appreciation grew the more I learned about its project-based curriculum and integrated approach to problem solving,” he said. “To tackling the more challenging issues we’re facing with water, you have to know chemistry, engineering, toxicology, health, policy, and social issues. With a team of students from different courses of study, big problems can be solved.”

While at Stony Brook, Walker built the university’s Department of Civil Engineering into one of the university’s top performing research departments, bringing in more than $10 million in external research funding since 2013. Walker’s own research has received funding from the National Science Foundation, the Department of Energy, the National Oceanic and Atmospheric Administration, and the U.S. Geological Survey, among other sources. He also led efforts to encourage underrepresented groups at the university to pursue careers in science, technology, engineering, and mathematics (STEM).

He is the author of the book Harmful Algae Blooms in Drinking Water: Removal of Cyanobacterial Cells and Toxins (CRC Press, 2015), he holds a patent for a membrane filtration system, and he has published nearly 50 peer-reviewed journal articles. Walker also was the director of the Ohio Resources Center from 2006 to 2012, and served as the founder and co-director of the New York State Center for Clean Water Technology for the past four years. In 2017 he was one of eight members appointed by Governor Andrew Cuomo to serve on the New York State Drinking Water Quality Council. The charge of the council is to make recommendations to the Department of Health on possible regulations for emerging contaminants in drinking water.

About the Alena and David M. Schwaber Professorship in Environmental Engineering

The Professorship, which recognizes a distinguished scholar and educator in the field of environmental engineering, was established in 2008 through a $2 million gift from the Schwabers. David Schwaber ’65 earned a BS in chemical engineering at and also holds an MS in chemical engineering from Cornell University and a PhD in polymer science from Akron University. He spent most of his career at his family's business, Monarch Rubber Company, where he rose to become president and oversaw the company’s transition from manufacturing shoes to making polymeric gasketing materials after much of the American shoe industry moved overseas. While at Monarch, Schwaber had to deal with the challenge of recycling manufacturing waste, which inspired his interest in the environment and environmental engineering. He created the professorship to inspire that passion in others. David Schwaber, who with Alena was also a major contributor to the university's Sports and Recreation Center through their funding of the Schwaber Dance Studio, received an honorary doctor of engineering degree from WPI in 2016. Jeanine D. Plummer, who recently returned to WPI as an associate professor of civil and environmental engineering, was named the inaugural Schwaber Professor in 2009.