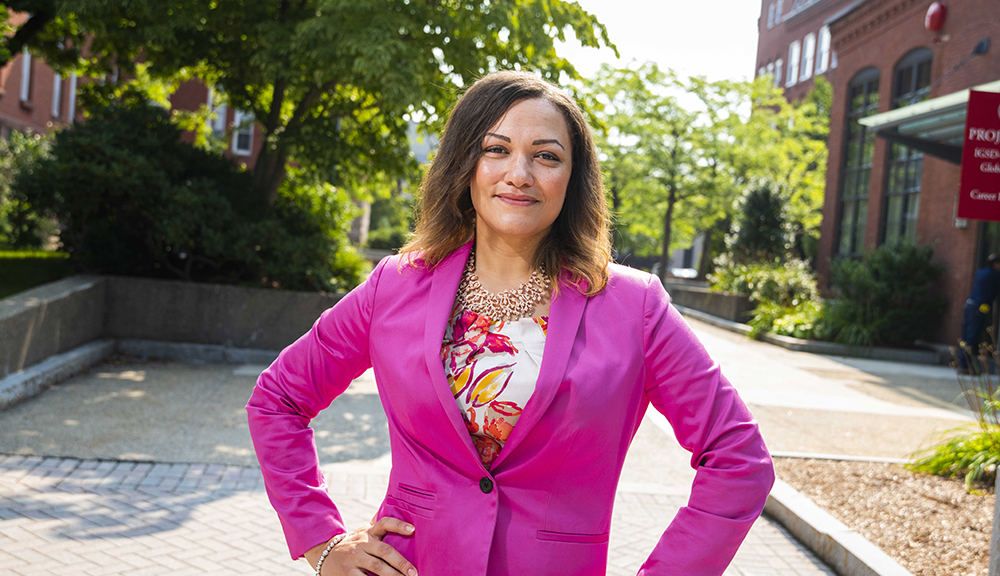 Bonnie Walker, WPI’s executive director of diversity and inclusion strategy, is on the Worcester Business Journal 40 Under 40 list, an annual recognition roster of up-and-coming professionals under the age of 40 who work to help others succeed.

“I am surprised and so honored,” she says, adding that her WPI position is “not just a job, it’s an extension of who I am.”

And if statistics are any indicator, she says, her work is cut out for her, with students of color who are African American or Latino still seeing the least growth in areas of STEM representation, as well as Native American students. Both groups, she said, aren’t seeing STEM role models in their communities, or getting the same resources in math and science as their white counterparts.

Walker grew up in a college town (Hanover, N.H., home of Dartmouth College), seeing academia in action: her parents held academic and administrative roles there. Her skills had been buoyed by those around her and then on the WPI campus, progressing and improving over time.

She earned undergraduate and graduate degrees at Clark University in sociology and communications, respectively.

“Most of my professional life has been at WPI — I have grown up here,” Walker says. “I am grateful for the high-touch role models, the mentors, and the many people who have supported my work and my professional development,” including vice president of talent and chief diversity officer Michelle Jones-Johnson; senior vice president Kristin Tichenor; director of admissions Jennifer Cluett; and vice president of student affairs Philip Clay.

Some of the professional support was secret—for a while, at least. It was Jones-Johnson who nominated Walker for the award (a fact Walker didn’t discover until after she learned she’d made the final list of 40 Under 40 honorees).

Progression with a Purpose

Walker started out in the WPI Admissions Office; she worked at Boston College briefly, and was back at WPI as associate director and coordinator of multicultural recruitment. Before being named to her current role two years ago, she also served as WPI’s director of multicultural affairs.

Her seat now at WPI is a newly created, consultative position geared toward providing outreach, education, strategy, and counseling in areas of diversity and inclusion efficacy, part of a series of initiatives that came to campus with President Laurie Leshin.

“I focus on diversity equity and inclusion with a focus on talent development,” Walker says. “The whole division has been restructured, with a dedicated talent recruiter and compensation analyst.

“Under me is a diversity and inclusion specialist—I do more of the strategy side and she does more collaboration with the Office of Multicultural Affairs," she says. "Theirs is a strategic focus on students, and we focus on faculty and staff … strategy around policies, working with the Board of Trustees.”

Frameworks that support inclusion of all races, genders, sexual identities, and abilities is at the core of Walker's work, first to improve the campus culture, then on a wider scale, the competitive global market. She says her role includes constantly being on the lookout for opportunities to bridge gaps in access and understanding overall.

“I am surprised and so honored ... [my WPI position] is not just a job, it's an extension of who I am.” -Bonnie Walker

Some of the programs she is involved with include the faculty search Diversity Advocate Program, for example, and the Great Minds, Brave Spaces speaker series. She contends that the more students and faculty feel included at WPI, they will be more inclined to thrive at the university, and out in the world.

Walker’s outreach efforts extend beyond the campus and into the community. On a larger scale, she oversees WPI’s involvement in the Leading for Change Higher Education Diversity Consortium—a collaborative effort headed by Bridgewater State University with work that includes benchmarking, data collection, and creation of best practices.

She received the Emerging Leader Award from the Worcester Regional Chamber of Commerce Diverse Professionals Roundtable last year. She serves on the board of the Girl Scouts of Central and Western Massachusetts. She is a strong presence in industry organizations as well, serving on the New England Association for College Admissions Counseling, American College Personnel Association, and as past president of the Northeast Consortium Bridging Access to College.

She is especially looking ahead to continuation of the university’s Project Inclusion initiative. Launched in 2017, it is a three-year effort to assess the campus inclusion status in the areas of faculty support and student involvement. Though WPI is ahead of the curve compared to other universities in many areas of inclusion, according to Walker, there is always work to be done.

She finds it most rewarding when she gets to work one-to-one with students, and knowing she is continuing great work started by others.

“When I get high-touch time with [students], it really does reignite the fire for me, it keeps me going,” she says. Also aligned with her sense of purpose is knowing that she is continuing the work of people like Martin Luther King Jr.

“There are trailblazers who have been in this work before me," says Walker. "I’m doing it on a continuum, the foundations built by other people.”