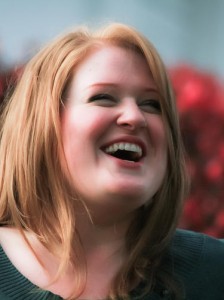 For a theatre program that is rarely in the spotlight, WPI’s HUA music division and VOX theatre collaboration has been garnering much attention lately. Stage director Kristy Chambrelli was recently named to the 2014 Emerging Artist Symposium: Musicals by the Stage Directors and Choreographers (SDC) Foundation and was also selected to attend the prestigious Directors Lab North this summer in Toronto, Canada. Many students probably don’t know who Chambrelli is, and if they do, the chances are it’s because they’ve been to one of the productions put on by WPI’s music theatre company, VOX, and read through the “Credits” section of the program. But regardless of her anonymity on campus, Chambrelli’s reputation in the world of musical theatre is far from quiet.

Theatre has always been an essential part of Chambrelli’s life. “I grew up in a household filled with music,” she says. “My grandfather was a band leader and multi-instrumentalist. I was constantly surrounded by music of all kinds, and you could say I was bit by the bug at an early age.”

She started her musical journey as a performer, often working in professional theatre as an opera singer. Chambrelli attended The Boston Conservatory, where she majored in vocal performance, but by her senior year she was burnt out.

“The Conservatory was a great experience, but it made me realize I would be much happier creating the art instead of being the vehicle through which the story is told,” she says.

Nevertheless, she graduated in 2005 with her bachelor of music, next studying composition at Berklee College of Music, and opera directing at Florida State University School of Music.

“I love creation and the process of telling a story,” she says of her fondness for stage direction. “My goal is always to try to completely immerse the audience in the experience and service the playwright and composers as best I can.”

Chambrelli began directing the main stage musical at WPI while still an undergrad in 2004, the year the Department of Humanities and Arts and VOX started collaborating. She’s been a staple in the WPI theatre program ever since, and has also acted as director for Clark University, New England Conservatory, and Florida State University.

Perhaps one of the most interesting elements of Chambrelli’s job is that it takes her all over the world. She was the resident opera director for the Asolo Art Song and Aria Festival in Asolo, Italy, for two seasons, and she spent two summers as a resident director for the renowned Long Lake Camp for the Arts in New York. She held master classes and lectured throughout Europe, and taught acting to students in performing arts programs all over the country. However, one experience in particular stands out among all the rest.

“I have been privileged to work on a phenomenal pilot program the past two years with Hartford Performs, which uses theatre to raise literacy levels in underperforming students,” says Chambrelli. Last summer, she worked with four children with autism, ELL students, and children who faced various physical challenges.

“We worked toward improving not only their literacy but their ability to communicate with others,” she says. “To see the level of performance these students gave…it was definitely one of the highlights of my career.”

Now Chambrelli has two more highlights to add to the list. On April 28 she attended the 2014 Emerging Artist Symposium: Musicals in Manhattan, where she and 64 fellow directors and choreographers spent the day discussing, conceiving, developing, directing, and choreographing musicals with industry professionals. Chambrelli was able to pick the brains of the well-known Susan Stroman (The Producers, The Scottsboro Boys, Bullets Over Broadway), Stafford Arima (Altar Boys, Carrie: the Musical), and John Rando (Urinetown, A Christmas Story).

“They bring in all sorts of people in the field to speak and teach,” Chambrelli says. “It’s a really intensive time.”

Directors Labs are insanely competitive. This year, only 20 people were chosen from a pool of applicants that stretched across the globe. Chambrelli will find herself in the company of directors from Canada, Israel, Australia, and the United Kingdom, among others.

But before she can jet-set around the world again, Chambrelli has one final task ahead of her.

“This year is the 10th anniversary of the HUA music division and VOX theatre collaboration in presenting musical theatre at WPI,” she says. “The show next fall will be Les Miserables.”

Hopefully, when audience members scan the “Credits” section, the name Kristy Chambrelli will jump out at them. If not, that’s okay – she already has world-wide fanfare.