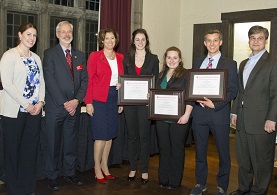 A team of undergraduates from WPI and the Indian Institute of Technology Mandi (IIT Mandi) was recognized as the “best of the best” at the 2014 President’s IQP Award ceremony on Friday, Jan. 30, for their project seeking to reduce traffic congestion in a small city in India.

Four additional teams were also honored for projects on issues ranging from water contamination in Thailand to adaptive bicycles in Worcester.

The Presidential IQP Awards recognize students whose conception, performance, and presentation of their IQPs have been judged outstanding in focusing on the relationships among science, technology, and the needs of society. This year’s five finalists, chosen from a pool of 59 entries, presented their projects to a panel of judges on Friday afternoon.

All undergraduates are required to complete an Interactive Qualifying Project (IQP), in which students, often in small teams, work under the guidance of faculty advisors to identify and develop recommended solutions to problems that lie at the intersection of science, technology, and societal issues and needs.

The first place team was ultimately chosen for the strength of their project, “Proposal for Traffic Congestion Alleviation in Mandi, Himachal Pradesh, India,” as well as their engaging presentation.

The students spent seven weeks investigating increasing traffic congestion in Mandi City, India, brought on by the growth of IIT Mandi. They interviewed a variety of local stakeholders, mapped traffic patterns, and analyzed their findings to develop a comprehensive set of short- and long-term recommendations, some of which have already been implemented.

At the awards ceremony, President Leshin praised the team for effectively using the talents of all team members and utilizing a balance of anecdotal evidence and qualitative measurements.

Speaking to the team, she said, “Your solutions were thoughtful, and during your presentation, you represented the region very well—we felt like we were right there with you.”

Alyssa Bornstein gives part of the winning team’s presentation prior to the judges’ vote. 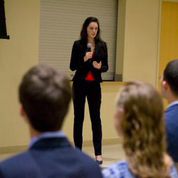 Team member Bornstein noted that the first place award is particularly significant because the team was among the first group of students to travel to WPI’s new Mandi project center. It is one of only two centers where WPI students work directly with students from the host country.

“It was such a rewarding experience to be able to go to India,” said Bornstein. “We definitely had to overcome some cultural barriers in working so closely with students from another country, but in the end it really helped us learn to collaborate to complete an intense project.”

While members from IIT Mandi were not on hand to receive the award, Bornstein added, “They were all really excited when we told them that we had been selected as finalists—I can’t wait to let them know that we’ve won!”

A Range of Impressive Project Work

At the awards ceremony, all of the teams received certificates of merit, and Leshin offered praise from the judging panel, made up of Leshin, Andrew Aberdale ’89, CFO of Target Logistics Management; Anne McGrath, Program Manager, Science Competitions & Education Relations Manager, Intel; Barbara Olds, Associate Vice President for Educational Innovation and Professor of Liberal Arts and International Studies at the Colorado School of Mines; and Benjamin Orbach, Founder and Director of America’s Unofficial Ambassadors initiative at Creative Learning.

Speaking to the “Development and Initiation of Sustainable Wastewater Management in Nakhon Si Thammarat, Thailand” team, who examined the feasibility of water treatment system in a rural village in Thailand, Leshin said, “You showed great cultural awareness as well as adaptability—when the scope of the project changed, you were able to adapt quickly and still research, assess, and implement several solutions.”

Of the “Worcester Earn-A-Bike: Creating An Adaptive Bicycle” team, who constructed a prototype bicycle for people with disabilities in Worcester, Leshin said, “You actually built something—you literally got your hands dirty. You also showed how WPI can make a great impact right in our own community.”

To the “Implications of Introducing the IIT Mandi to the Rural Kamand Region” team, who worked at the Mandi project center to assess environmental and social impacts of IIT’s growth, Leshin said, “You showed great cultural sensitivity—when you had challenges, you leaned in and used them as an opportunity for learning, which is what the IQP is all about.”

Speaking to the “Development of the Inspire Engineering Mentoring Program” team, who developed an extensive curriculum for a STEM education project in London, Leshin said, “We were impressed with the sheer volume of work you produced—you didn’t have a lot of raw material to work with and drew from many disparate sources.”

Kent Rissmiller, associate dean, IGSD, offered a concluding sentiment, saying, “It was absolutely fabulous to hear from all of the students today. They show such a commitment and have done impressive work. It was really great to share in their achievements.”