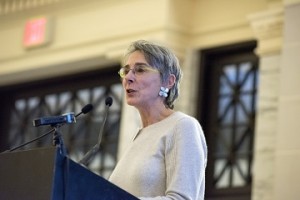 Worcester Polytechnic Institute was an active partner in the Art of Science Learning’s Worcester Incubator for Innovation at Union Station on Jan. 22.

The incubator—an initiative funded by the National Science Foundation (NSF)—uses the arts as a springboard to foster creativity in science education.

“The way I explain it to people,” says Joyce Kressler, director of the Worcester incubator (and former director of First Night Worcester), “is that we’re using the arts as vehicles to see things differently and to spark different ways of approaching critical problem solving.”

The goal, according to Kressler, is to build a more broadly innovative STEM workforce.

The $2.6-million NSF grant is part of the Phase-2 initiative of Art of Science Learning. Chicago and San Diego also launched incubators in recent months.

Karen Oates, dean of arts and sciences, and Kristin Boudreau, associate dean and head of the Department of Humanities and Arts, served as incubator advisors. VJ Manzo and Scott Barton, assistant professors of humanities and arts, and Jennifer deWinter, co-director, professional writing, served as team mentors. Students Briana Weisgerber and Brian Manning were Innovation Fellows, says Kressler. The WPI campus was used for parts of the program’s curriculum initiatives, as well.

Incubator team members—volunteers from different age groups and non-scientific disciplines such as education and business—committed to the project for a year, Kressler says. Team members were led by mentors, such as WPI’s Manzo.

An assistant professor of music technology, Manzo says the incubator was all about bringing science to non-scientists, to get their unique perspective.

“My music credentials meant nothing to this,” Manzo says of his involvement. “They were looking for mentors who have used arts-based methods to promote STEM education—such as using music to teach STEM concepts.”

In the Worcester incubator, all seven groups addressed transportation challenges in the city. As a mentor, Manzo says his role was to help facilitate, help the group define its goals, and to estimate what members could realistically do on a structured timeline and confined budget.

Manzo notes that the incubator is similar to an IQP, but for laypersons. “We are leaning on an arts-based perspectives to tackle what would otherwise be STEM issues,” he says.

Each Worcester team created its own innovations, all geared toward improving city transportation as it relates to connectivity.

Manzo’s group, for instance, was tasked with finding ways to encourage cultural exploration. The proposal, Secret City Interactive, creates an engaging pedestrian experience utilizing a smartphone app and social media along with user-generated content designed to get folks out walking and learning more about their communities. The smartphone app allows users to scan designated landmarks, prompting the phone to display images or text relating to that particular place.

“It’s to get [team members] to think outside of their own parameters,” Kressler says of the projects, “from ages 16 to 75 … these are your neighbors, friends, co-workers, and relatives, who have tried for six months to come up with answers to better our community.”

What was achieved in Worcester was especially impressive, Kressler says, as the incubator was on a shorter timeline than those in California or Illinois, due to the resignation of the original director due to health reasons.

Now, data compilation is the next step for the incubator projects, Kressler says. Team members can apply to the Art of Science Learning’s Accelerator Program, where the highest-performing teams are selected to continue with their innovation, and additional ports are created to help bring teams’ projects to fruition. Or, teams may want to continue and get their innovation to the marketplace on their own.