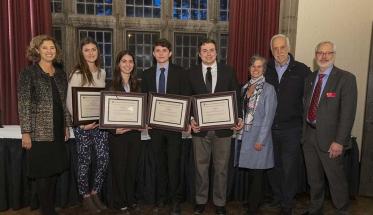 Hundreds of Interactive Qualifying Projects are completed each year by WPI juniors as part of their graduation requirements. A fraction of those are then submitted to be considered for a President’s IQP Award, and on Friday, Feb. 1, five student teams gave their final presentations in front of a panel of judges to determine the winners of the 2018 awards.

Presented annually, the President’s IQP Awards are given to student teams whose IQP work is determined to be outstanding in its focus on science, technology, and society.

“This is one of my favorite days of the year,” said WPI President Laurie Leshin in her opening remarks. “It’s such a great opportunity to honor the work of our students and faculty in these incredible communities.”

Faculty advisors, parents, and peers gathered in the Odeum to hear the final five teams present their work, which ranged from designing a rainwater harvesting and recycling system for the El Cuerpo de Bomberos’ National Fire Academy and determining the best restoration techniques for artist Jean Tinguely's works, to creating a case study for wastewater treatment development in an Albanian village, to inventing new flavors of taffy to help cut down on drowsy driving in Himachal Pradesh, India (they included the recipe in their report).

“This is one of my favorite days of the year. It’s such a great opportunity to honor the work of our students and faculty in these incredible communities.” -President Laurie Leshin

Besides President Leshin, the 2018 judges panel included Ashley Finley, senior advisor to the president and secretary to the board of the American Association of Colleges & Universities; Joyce Kline ’87, North America Aerospace & Defense Digital Lead and the North America High Tech Analytics Lead at Accenture and a member of the WPI Board of Trustees; Asima Silva ’01, ’04, a social entrepreneur who has earned the title of IBM Master Inventor and is currently an elected official for the Town of Holden as a member of the School Committee for the Wachusett Regional School District; and Woody Bradford ’89, CEO at Conning and a member of the WPI Board of Trustees.

Although the ceremony is meant to celebrate successes, the students didn’t shy away from the challenges and even failures they faced while completing their work. From adjusting the scope of their projects to a more manageable size and presenting their technical and business findings to professional groups entirely in Spanish to coordinating their own schedules with those of other students they collaborated with at local universities, their work perfectly captured the spirit of project-based learning and the IQP.

First-place honors went to “Reducing Flood Risk in Shkodra Through Community Engagement.” Judges were impressed by the team’s development of an interactive game and fill-in guide to help citizens be better prepared for floods in the future, as well as the team’s clear impact on the community and vice versa.

At the event’s conclusion, President Leshin reiterated her praise and admiration for all teams, adding that she’s grateful to have been part of the day. “To get to hear about all the work you’ve done, all the people’s lives you’ve impacted," she said, "it shows that you really do embody this idea of taking theory and practice and using it for positive impact in communities around the world.”