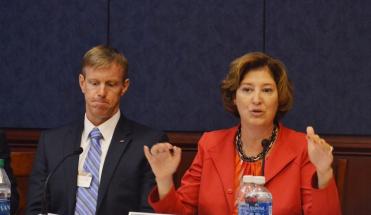 A significant skills gap in manufacturing, coupled with increasing pressure to innovate, is causing concern among university leaders and organizations across the United States. In an effort to address the challenge, five industry and university panelists—including President Leshin—participated in a congressional briefing recently to voice their support for the Department of Defense’s new Manufacturing Engineering Education (MEE) grant program.

“I think it’s important when the government says that we need to start thinking differently and more innovatively about how we’re addressing the skills gap today and into the future,” Leshin said at the hearing, which was convened in Washington, D.C., in conjunction with the House and Senate Manufacturing caucuses.

The MEE grant program was authorized by Congress with initial funding of $10 million for fiscal year 2017. However, university and industry leaders are requesting that Congress increase funding in the MEE program to $80 million for fiscal year 2018, and then $80 million annually from fiscal years 2019 through 2021 as a proposed insertion into the president’s future budget request. An increase in funding would allow awards to at least 20 universities and organizations of $4 million each in the first fiscal year.

ASME (known as American Society of Mechanical Engineers) hosted the July 25 hearing, which included panelists from WPI, Clemson University, the Department of Defense, the Information Technology and Innovation Foundation, and Northrop Grumman Corp. The MEE program seeks to develop programs that closely link universities with industry and national labs by training engineering workers for the manufacturing of next-generation technologies, including military-industrial manufacturing activities.

Check out the video of the briefing to hear more of President Leshin's remarks on the Manufacturing Engineering Education grant program.

Welcoming remarks were delivered by Said Jahanmir, ASME President-nominee, and the event was moderated by Tom Kurfess of the ASME Manufacturing Public Policy Task Force.

Many of the panelists described current initiatives with which they are involved, and how those experiences could inform future MEE efforts. Pointing to the importance of manufacturing education, Brennan Grignon, deputy assistant secretary of defense for manufacturing and industrial base policy for the Department of Defense, said the DoD has taken the role of coordinating education and workforce development efforts for Manufacturing USA, a network of 14 institutes focused on a range of manufacturing areas. (WPI is involved in eight of those institutes.) Grignon added that she is concerned about a lack of expertise in manufacturing. “The skills gap in manufacturing has been a problem in this country for a long time,” she said.

In her remarks, Leshin pointed out that, out of 1.9 million bachelor’s degrees awarded annually, only 100,000 of those are engineers. “If we really want to compete in the global innovation economy, that’s not nearly enough,” she said.

Leshin added that the MEE program would help train a future generations of workers amid a dramatically different manufacturing landscape. She said there are significant advancements in areas such as 3-D printing, advanced composites, and human-robot interaction, while the Internet of Things is embedded in products that are manufactured. “It’s a very different world in manufacturing than we saw even a few years ago,” she said. 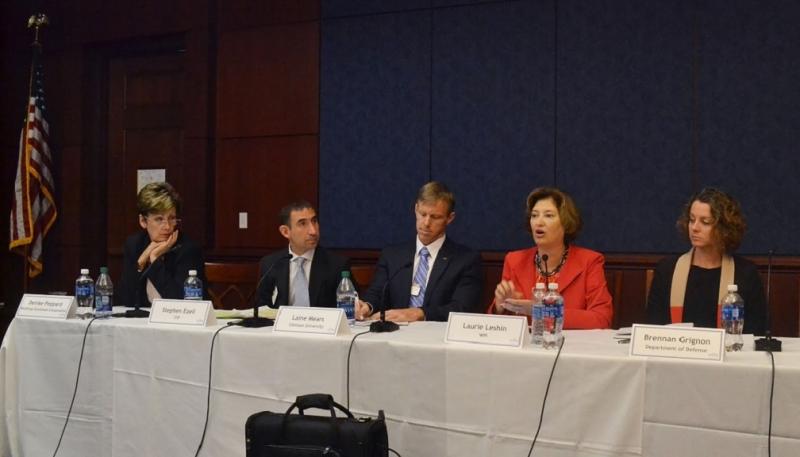 President Leshin (second from right) speaks on the panel.

She told the gathering about WPI’s project-based academic philosophy, noting that “100 percent of students from WPI graduate with multiple, intensive project-based experiences that are based in the real world.” She said WPI’s educational model can serve as a template for this type of initiative.

“I think that kind of innovative approach, where we’re really willing to take the chance in doing something dramatically different in our education programs, is the kind of thing that new grant programs like this can really encourage and try to foster,” she said.

Other panelists echoed Leshin’s remarks and discussed how their hands-on approach to learning has spurred productive partnerships with industry.

Laine Mears, a professor of automotive manufacturing at Clemson University, described how Clemson is building the nation’s first pilot plant for manufacturing in an educational setting. The facility, a full-vehicle assembly factory with parts and logistics, allows students to learn on machines that prepare them for the future. “This factory is not about research,” said Mears. “This factory is about education.”

Stephen Ezell, director of global innovation policy for the Information Technology and Innovation Foundation, highlighted several reasons why new approaches to manufacturing education are critical. He said too many universities are focused on engineering as a science and that there has been a move away from problem solving. He also said the United States needs to become as competitive as countries such as Germany, which contributes almost twice as much to its gross domestic product as does the U.S. Since 1987, Ezell said, Germany has lost just 8 percent of its workforce while the U.S. has lost 43 percent.

Panelists also discussed the need to attract a more diverse manufacturing workforce. Denise Peppard, chief human resources officer at aerospace and defense company Northrop Grumman Corp., described “a paucity of diverse talent in the engineering field.” She said that Northrop is seeking to hire more women, minorities, and people with disabilities. She added that 30 percent of Northrop’s hires are military veterans, whom she called “a critical source of talent.”