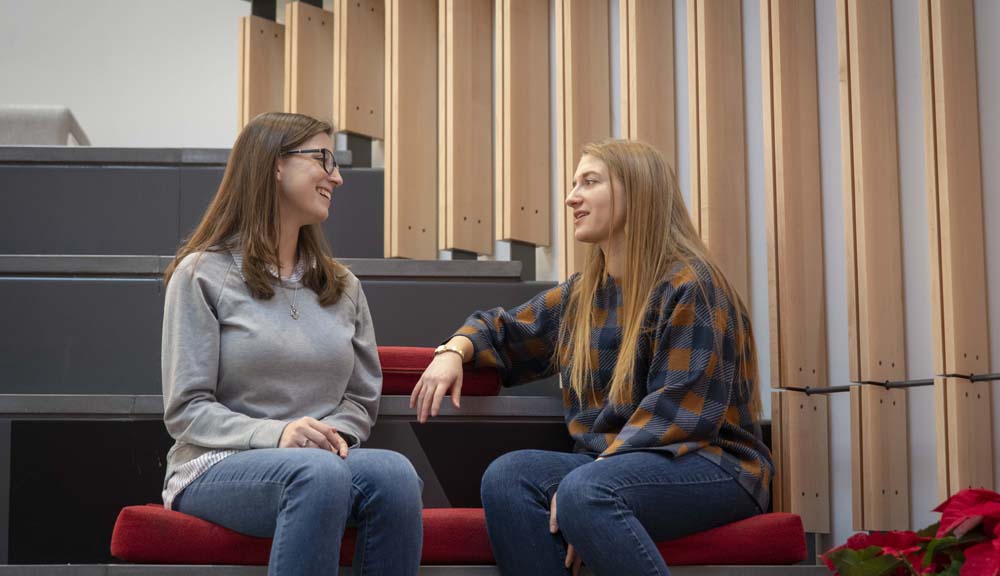 Maggie Kuck (left) and Ariel Goldner (right) in discussion on the steps inside the Foisie Innovation Studio.

Bringing Difficult Topics to the Open

In response to rising instances of hate across the globe, two students recently organized “Hate Has No Place Here.” Ariel Goldner ’19 (mechanical engineering) and Maggie Kuck ’19 (chemical engineering) say the deadly synagogue shooting in Pittsburgh on October 27 galvanized them to bring others together and shine a light on topics that are difficult and painful to discuss.

Approximately 200 students attended throughout the day on December 3 to hear presentations by survivors of the Rwandan genocide and the Holocaust, a discussion from a former KKK leader, conversations about privilege, and personal perspectives from a student panel.

The Student Activities Office collaborated on the planning and coordination, but the event was student-run. “The students have worked very hard and thought strategically on how to create an impactful program on campus, while collaborating with many student organizations to make it a reality–which is really powerful,” says Christine Sharry, director of student activities. “It is important for students to come together to share or find their voice, to learn from one another, and—most important—to learn how to take action. These are skills that will help them become an engaged citizen and global leader.”

Goldner and Kuck agree. “WPI is a bubble you are going to leave someday,” says Kuck. “I think events like this will better equip you for the world.”

What inspired the event?

Ariel: For me, this was right after the vigil Maggie had put together for the Pittsburgh shooting. During the vigil, I looked into her eyes, and I saw her pain. She was crying and I was crying. We knew we had to take a step forward in our community as this is something we don’t talk about. It all stemmed from the want to open up a conversation. We would discuss big concepts that we deem sometimes too controversial to have big events for on campus.

Maggie: I started to notice where I stood in this university. Being a senior and being in charge of different clubs and organizations, I felt like I had the ability and the privilege to say something for the groups I represented, but I didn’t feel that was enough. After the vigil, I had a lot of people asking me “What can I do?” or “What should I do?” As Ariel and I started to have these conversations, we realized just bringing people together to start to talk, as an individual to come to this event … that is making a positive step. That is starting to put change in motion. This event is an outlet for all the different students who spoke at the vigil or who had been thinking these things to join in, to feel empowered, and to learn from their peers.

You had less than a month to plan this. What was important?

Maggie: We wanted to show that it’s possible to take an idea and be able to grow it into a large event to help bring all the individuals together.

Ariel: We have the privilege of raising our voices loud and we wanted to start that conversation.

Maggie: Some had doubts that we would be able to pull off this event in such a short time, and I immediately thought about how we attend a fast-paced university. If we are expected to complete large-scale school projects in a short time, why can’t we put on an event like this? As a team, Ariel and I wanted to show students there’s time to care about academics and be a good student, but still take the time for things you feel passionate about.

"As a team, Ariel and I wanted to show students there’s time to care about academics and be a good student, but still take the time for things you feel passionate about." -Maggie Kuck

What resonated with you most about the event?

Ariel: As I am the granddaughter of a Holocaust survivor, the dangers of hate have always been instilled in me. When I was younger and attended Hebrew school, we were shown pictures of the millions that suffered during the Holocaust. We saw the images of dead bodies lying on the ground, and our ancestors being stripped of their humanity. My whole family except my grandfather perished in the war. Discussing how we as a community can come together to prevent future crimes against humanity, both big and small, is a cause I feel passionate about.

Maggie: For me, part of it is that I have always been so interested in learning about different cultures and backgrounds. My mother, an immigrant from Argentina, had passed her family traditions on to me and inspired me to learn about different cultures. I was lucky to have a group of friends whose families came from all over the world. We’d always share each other’s traditions. I didn’t start exploring my own traditions within Judaism until I came to college. I got the opportunity to go to Israel, and I met Ariel and we started talking more. She welcomed me into the Jewish community. It flourished for me into such a huge part of my life in such a short amount of time.

Ariel: After the shooting, it scared me to think that my mother could be the next victim as my mother frequently attends Shabbat services in our synagogue back home. So, when I see somebody willing to come and exercise their want to hate so badly, it infuriates me to say the least. It shakes me. It makes me fear that we will live in a day where I can’t practice my Judaism freely, where my mother can’t practice freely, where the past will become the present. That’s only in terms of my Judaism and anti-Semitism. What about other communities living in fear? They are suffering. We are not the only community hurting.

"Discussing how we as a community can come together to prevent future crimes against humanity, both big and small, is a cause I feel passionate about." -Ariel Goldner

Maggie: To see these incidents happening and to see people hurting, it’s very frustrating. And then to see what’s happening in the country and around the world as I feel I am coming into loving being Jewish and connecting with it and seeing it as being part of my identity and starting to become my faith … you would like to think we are past this happening. But we are really not. This isn’t something that is coming out of nowhere. All this hate has always been here; it’s just starting to come out more now. We live in a terrifying time. It is more visible. If we don’t say something now, when are we going to say something? If you don’t start acting, the other side, the hateful side of this nation, of the world, is going to overpower all the amazing people we have.

Were there parts of the day that were reassuring to you?

Ariel: After one of the sections, I got a text that said, “We could listen to conversations like this for hours.” I am happy we have sparked interest. It made me thankful that Maggie and I weren’t just shouting in the dark when we planned this—that people were actually listening.

Maggie: Students were having breakout conversations focused on topics that we had not had the time to explore as a group. I was thankful that people thought beyond what they had just experienced and what more there is to say on the subject. This event was meant to be a start, not the end, of all these conversations.

Ariel: On a day-to-day level, we experience normalizing acts. It’s not ok. You can’t make those little jokes—they hurt people. We need to understand why that is not ok as a community. We need to understand how we can grow from these small acts. How do we eradicate hate on this very small level? We know we can’t change the world right now, right here. Small acts make big differences in the long run.