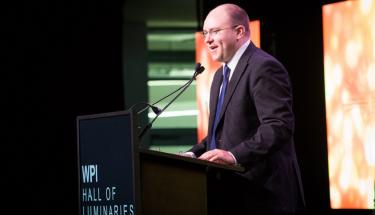 Winner of NASA Regolith Excavation Challenge, BattleBots 2015, talks about his work and the future of robotics

Robotics standout Paul Ventimiglia '12 returned to campus this month to attend the Hall of Luminaries event. The New Jersey native accentuated his time at WPI by winning some notable robotics contests. In 2007 he took first place as head of the WPI team in the Battlebots IQ College Division. Two years later, in the NASA Regolith Excavation Challenge, he won the top prize of $500,000 for Moonraker, a robot that could potentially harvest lunar soil. 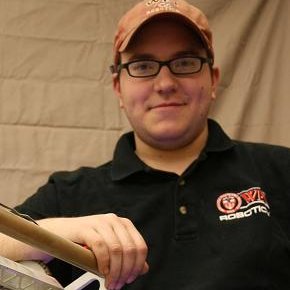 ​Ventimiglia has also participated in the National Robotics Week at the Smithsonian Institution in Washington, D.C., where he represented WPI and showcased Moonraker. In 2007 he was part of the WPI/Mass Academy of Math and Science team that won the FIRST Robotics world championship in Atlanta, Ga.

Ventimiglia currently resides in California, where he started a robotics design consulting company, Aptyx Designs. He continues to have close ties with the WPI Robotics Engineering Department, and his undergraduate work on a robotic hand prosthesis was later used as a prototype by a team from WPI that won the prestigious Cornell Cup in 2014.

While on campus, Ventimiglia took some time to chat with the Daily Herd.

What is your job, and what does it entail?

I am a mechanical engineer at a small Silicon Valley start-up called Robby Technologies. We’re building sidewalk delivery robots, so I help build robots that are going to deliver things all around town. I spend a lot of my time doing the detailed CAD design and manufacturing of new robots. It’s sort of a new space where they are trying to get a package delivered by big companies like Amazon, or even groceries from Whole Foods via Instacart.

How far off is that?

Delivery robots already exist. They are being tested all around the world by various companies. So, certainly, it’s a big space in a big market. A lot of companies are trying to make robots do the automation for driving so that the task can be done quicker and more cost effectively.

What are some of your professional and personal goals?

Professionally, I’ve always dreamed of having my own giant machine shop where I can work on R&D projects—basically, be a full-time inventor or scientist—and so all of my projects are small aspects of that. But, in the end, I’d love to have a giant space where I own all the tools and can play around and tinker and build things.

Do you do that now somewhere?

I’m constantly building things, but I don’t have a space of my own. I spend a lot of my time mentoring high school students in the FIRST Robotics program, and at my job I have access to machine tools, but I’d love to own my own shop one day.

How did WPI prepare you to excel in robotics?

WPI was a big part of all of my career and robotics aspects. One of the big differentiators was that WPI had full access to all the machine shops, once you showed them that you were safe to use the tools. They would let you access the tools 24 hours a day, which is pretty different compared to other universities. As soon as I came here I was learning to use all the machine tools to build various robot projects, and WPI was very instrumental in some of the bigger engineering competitions I’ve competed in.

The biggest one was the NASA Regolith Excavation Challenge, where I led a team of people from WPI that built the robot to compete in this NASA challenge. We were able to use all the space at WPI, the people, and the resources, and especially all the machine shops in the lab to construct the robot and test it before the competition.

As a child, did you have access to any of that technology?

I’ve been interested in robotics and engineering since I was a kid. I was especially excited by watching movies—like Star Wars and Terminator and Jurassic Park—and I always wanted to build the special effects that were in the movies. I always loved watching the behind-the-scenes videos. And, then I would play with Legos, basically, and learned a lot of little engineering things about gear ratios and motors. When I was in middle school is when I first built my big robot, a Battle Bot. It was 60 pounds. Building and competing in that competition was really impressive, because when I got to go the event—I think 14 was the first event—I saw hundreds of robots and robot builders from all over the world, and I was really inspired to just keep building more robots and competing.

Do you have a favorite robot that you built?

I don’t have a favorite robot that I’ve built. I really like the design process of building robots, and once the machines are built, I think they are more of a frustration to keep running and to repair. Once a machine is finished, I sort of see all the flaws in it and the things I want to change next time, so I don’t really care about it as much once it’s done.

In what direction do you see the future of robotics going?

I think robotics is going to be everywhere. It’s already pretty much everywhere and in everyone’s lives. You just don’t notice it. As we go forward and when everything is cheaper—all of the motors and the hardware and the processors are cheaper—then it just will become more commonplace. Right now, all the technology is pretty much there to do really impressive stuff, just at very high-cost points for some of the more challenging things.

I think in the future you won’t notice a lot of the robots because they’ll be used in a lot of automation, but I’m a big fan of pretty much the hardware side of robots. I don’t think about all the programming on the computer side. What excites me more is machines that can walk around, move around, mobile robots, things that are in factories. Those are really exciting to me.

Where do you see the most growth?

I imagine it has to be cost-driven by some market. Right now things like warehouse robots are a big deal for some of the big companies. I think there is a lot of money to be made in robotic assistance, in things like the trucking industry, where trucks are driving 24 hours a day around the world. If there can be any sort of robotic help in guiding the trucks or bringing costs down, that will be huge. In the same way the airline industry already works where all planes have pilots in them, but they are driven essentially by computer. I don’t think that robots will replace a lot of things. Just personally, I think that the level of liability you would need for some of the more dangerous applications will never be reached in terms of the legal standpoint, even if the robots are equally as good as a human in some tasks. For self-driving cars, for example, I don’t think that the reality is that self-driven cars will be everywhere, but I think that they’ll be at least assisting humans in a lot of interesting ways and hopefully working more with mass transit.

What would you say to younger kids looking at WPI for robotics?

I would say to young kids looking for a college to attend for robotics, you have to find the school that is right for you. For me, it was the fact that I was interested in many things. Robotics engineering is the biggest passion in my life, but I’m also into things like sailing and theater and the arts. WPI was one of the few places that had all that, but it wasn’t a big, 30,000-person school. And, so for me, I wanted to have a smaller feel, wanted to get to know the professors and the students and have a lot of access to all the machine shops and the labs. I couldn’t find that at any giant university, and WPI was the perfect fit for me in that sense. Having the really strong robotics engineering program, it was certainly my main looking point for a university.

What are the differences in automation 10 years ago from what we’re seeing now?

I’d say not much has changed, really. It’s been about 10 years since I was working on the (Moonraker) project with team members at WPI, and it is actually surprising that so much has changed and, in reality, some of it hasn’t changed at all. One of the biggest changes in robotics is that the power you can get out of a battery is two, three, five times better power density than it was just five or 10 years ago, and every year they’re coming out with new batteries. That’s a big limit right now for any mobile robots—the power source.

Some of the computing  sensors have become cheaper and better, which is good, but they still haven’t come down to the cost where it’s commonplace. A lot more manufacturing has become available to everyone. Back in the day a lot of people didn’t know about what water jet machines were, or how you could laser-cut metal—and now it’s more commonplace to find a company on the website that’s right nearby you and you can upload your parts and you can get your parts made or 3D printed in the next couple of days, that’s a big shift. Back in the day 3D printers were not very good, were overly expensive, and only universities had them. Now, everyone can have a 3D printer if they want one.

What would you do if you could go back with what you know now with all the technology? Would you do something differently?

If I had a chance to go back, I probably wouldn’t change a whole lot, except maybe have more fun. Sometimes building robots takes up a lot of time, which is something you can do when you’re, say, 20 years old. You can work all night for months at a time. You can’t do that when you’re older. So, I may have pushed harder back then, but I probably wouldn’t change anything in terms of the projects I’m interested in. I’ve just always been hooked and into robotics. I can’t exactly explain why. I just think they’re very interesting and cool.