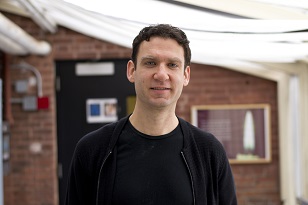 As Professor Britt Snyder started C-Term in the icy grip of a New England January, four of his luminescent oil paintings basked in the glow of acclaim at the LA Art Show 2015 in California.

Snyder, a professor of practice in Interactive Media and Game Development, has just begun showing at the Arcadia Contemporary Gallery in New York City. His focus is primarily portraiture, and he often uses his wife and daughter as subjects.

“They’re there and easy models, and I know them so well,” he says. “They’re also what I’m interested in; I’m more interested in my family than in any other subject.”

Snyder’s style is figurative and representative, and “I like the look of direct painting in oils,” he says. “That speaks to me.”

In the prestigious LA show, which ran from January 14 through 18 at the LA Convention Center, 120 galleries from 22 countries exhibited 20,000 works of art. Now in its 20th year, the show is, according to its website, “the largest and longest running platform for fine art” and, in recent years has become “the most internationally diverse art platform in the Western world.”

In LA, the Arcadia booth exhibited four of Britt Snyder’s paintings: Held, Swim, Gray, and Close (which partially captures his young daughter’s face, her head tilted to the side). With two locations in New York City, Arcadia Contemporary was named the best gallery in the city by the American Art Awards in 2014.

Snyder has spent much of his career as an artist in video game development, working for SONY and Blizzard Entertainment, among many others, and contributing to games that include Warcraft 3, WALL-E, and Downhill Domination.

When he came to WPI five years ago, it was to teach students game art. He has done just that, offering courses in 3D Modeling, Digital Painting and Concept Art and Creative Illustration.

At the same time, he was encouraged to complete his terminal degree. Last June, after two years of study, he received his MFA in painting from Lesley College of Art and Design. 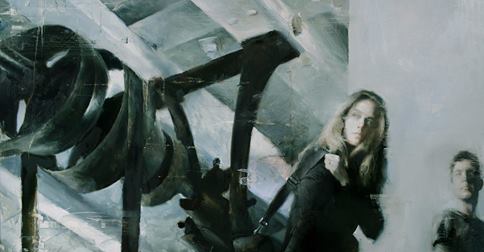 “I took it seriously. I really embraced it and tried to do something with it.”

Though others had expected him to study digital art, “I wanted the opportunity to branch out, to do something different,” he says. “I had painted before but not as seriously. I had always wanted to take my painting further.”

The LA show is a critical first step for him, “the big reveal,” he jokes.

“My understanding is that foot traffic [in galleries] is not where they get collectors but rather art shows,” he says. “I’m so new to this, but the conventional wisdom is that LA and New York are the [critical] art markets in the United States.”

It’s been an exciting time, and he’s reflective about the new direction his career is taking.

“I’m not young, and I can’t say that it’s happening quickly. There’s the perception that it’s different from what I’ve done in the past, but it’s not—it’s just a new chapter.”

That said, Snyder finds a qualitative distinction in the two media in which he works. In game design, there is a need for precision and specificity: “You have to spell out for the viewer what you’re saying,” he says.

In his painting, however, he can explore emotions.

“The paintings are my family as a subject, but really not a specific narrative,” he says. “It’s portraiture, but also feelings and some metaphor. They’re only partly about people.”

As he looks ahead to the next stage of his career, Snyder wants to encourage the connection between art and community.

“Painting is a very introverted activity, and so is game development,” he says. “I’ve started a group in Boston for illustrators, concept artists (people who design for video games), and painters where we will be discussing working on community projects like murals, free workshops, shows, and collaborative art projects.”