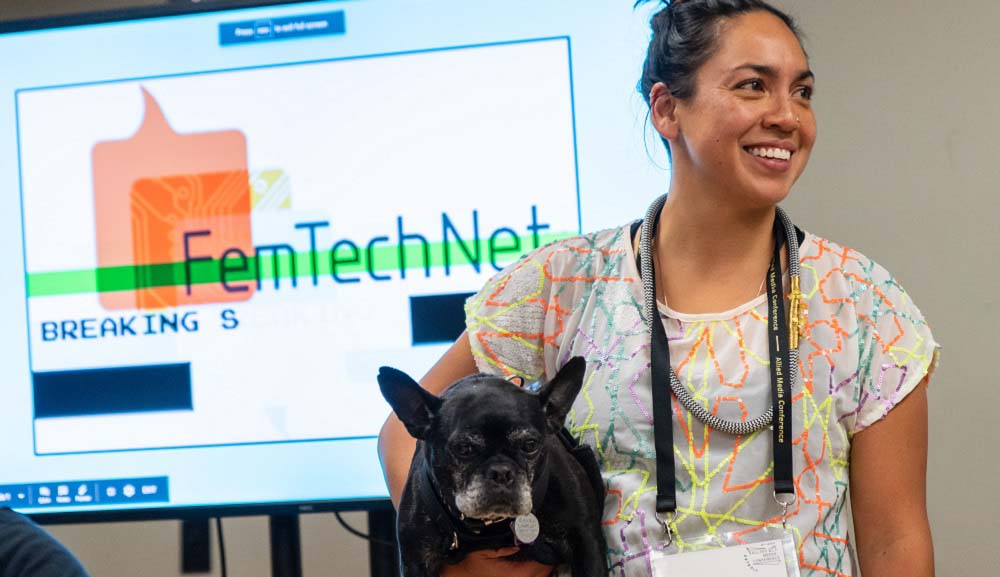 From her book on the use of games, Alexandrina Agloro aims to bring freedom and a better life to areas where there is need

With the help of a Ford Foundation Fellowship, humanities and arts professor Alexandrina Agloro is writing a book about three community-developed games from Providence, Alaska, and South Africa that illustrate how interactive media and game design can educate people about important social realities and inform them of their power to effect change.

The fellowship will also allow her to reside during the spring 2019 semester at Arizona State University’s Nexus Co-op, where she will work with other researchers, artists, and technologists to produce a functioning prototype of ovulation-tracking jewelry that is “affordable and flawlessly stylish.”

The jewelry will be designed to combat the culture of shame around menstruation, and offer young women a wearable that is designed specifically with their input, she says.

The book and the jewelry are elements in an array of activities swirling about in Agloro’s professional life.

They include her joint professorship at WPI in Interactive Media and Game Development and Humanities and Arts, her role as the university’s Serious Games person, and her efforts in getting her students to important games conferences in San Francisco and Los Angeles last year, and collaborating to bring a games conference to WPI this fall.

She is also the director of Situated Critical Race and Media (SCRAM) of FemTechNet, a multi-university collaborative feminist technology organization, and is the Futurist for the Latinx Pacific Archive, which gathers together oral histories, photos, and other material that detail Latinx experience.

"My medium is technology and I’m really interested broadly in how we use interactive media and technology to get free to make our world a little better.”

As the LPA Futurist, she traveled to Australia this month for the launch of her exhibition, Aquatic Boarder-Lands, at the University of New South Wales in Sydney. She says the various projects she is involved in revolve around a central theme in her professional endeavors.

“In the essence of what I do, my overarching question is always, ‘how do we get free?’” she says. “In a liberatory way. In an emancipatory, liberatory style.

“Everything I do goes in that direction. How do we find freedom? How do we find stakes, justice, liberation in these spaces that don’t actually offer or have that? My medium is technology and I’m really interested broadly in how we use interactive media and technology to get free to make our world a little better.”

Agloro has been working on her book since last year, and hopes to finish it by the end of January.  It offers case histories of the three games.

One is called The Resisters, which she developed in 2014 with the help of local community youth in Providence. It is an alternative reality game that explores the city’s social movement history through archival information such as reports and other documents. The youth searched out that material in an off-line scavenger hunt and the documents were posted online daily over a three week period.

A second game was put together by developers in collaboration with an informal settlement re-blocking NGO in Cape Town, South Africa. Called Vukuzenzele, the game allows residents to re-design their neighborhoods using a digital platform in an effort to give the community better access for emergency vehicles and to promote improved infrastructure and basic services.

The third, titled Never Alone, is a video game that draws on the history, culture and values of the indigenous Inupiat people of Alaska as related to indigenous game developers by Inupiat elders and others familiar with the people’s culture of community-informed selflessness. The game adapts the story of Kunuuksaayuka, an Inupiat child, who must draw on the lessons of her people to succeed.

Agloro is also a doula, trained in providing assistance to women giving birth and support to the family after the baby is born. She sees her work in developing ovulation-tracking jewelry as pursuing her interest “in women having sovereignty over their bodies from a young age.”

“So I’m not thinking about it as a pregnancy device or a birth control device but as a teaching and learning device for young women to know about their bodies and to use technology to give them that,” she says.

And her work with the Latinx Pacific Archive is a way of providing access to information collected by academics to the people who provided the material in the first place.

“I’m building digital archives so that the communities these stories are about can access these stories on the internet in logical ways for them,” she explains.

Her Latinx efforts led her to receive a PLuS Alliance grant to produce the New South Wales exhibit. It is done as part of a three-university collaborative including Arizona State, the University of New South Wales, and Kings College of London. The collaborative was charged with producing an exhibit on “migration, mobility, and belonging,” and Agloro’s contribution is a three-screen triptych of Latinx migration to Hawaii, including the history of paniolos, where Mexican vaqueros taught Hawaiians how to be cowboys.

In A-Term she will help oversee the 2018 Different Games Conference, scheduled for Oct. 12-14, which is being held at WPI for the first time in large part due to connections Agloro forged with the Different Games Collective.

“It's a conference and games showcase for DIY and indie games that focus on marginalized voices,” she says. “We’re interested in supporting the growth of games beyond first-person shooters and sports games.”

A call for submissions is already closed and the university’s Diversity in Games Club is on board to play an important role. Agloro says, “They’re going to have a huge part in curating the contents of the conference.” 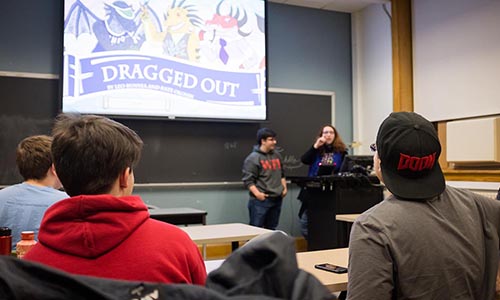 WPI's Diversity in Games Club aims to provide a safe, friendly environment for members to discuss issues affecting video games, board games, and the gaming industry itself. Students also have the opportunity during the meetings to present on different topics that are particularly interesting or important to them.

Read more in the Daily Herd about Diversity in Games