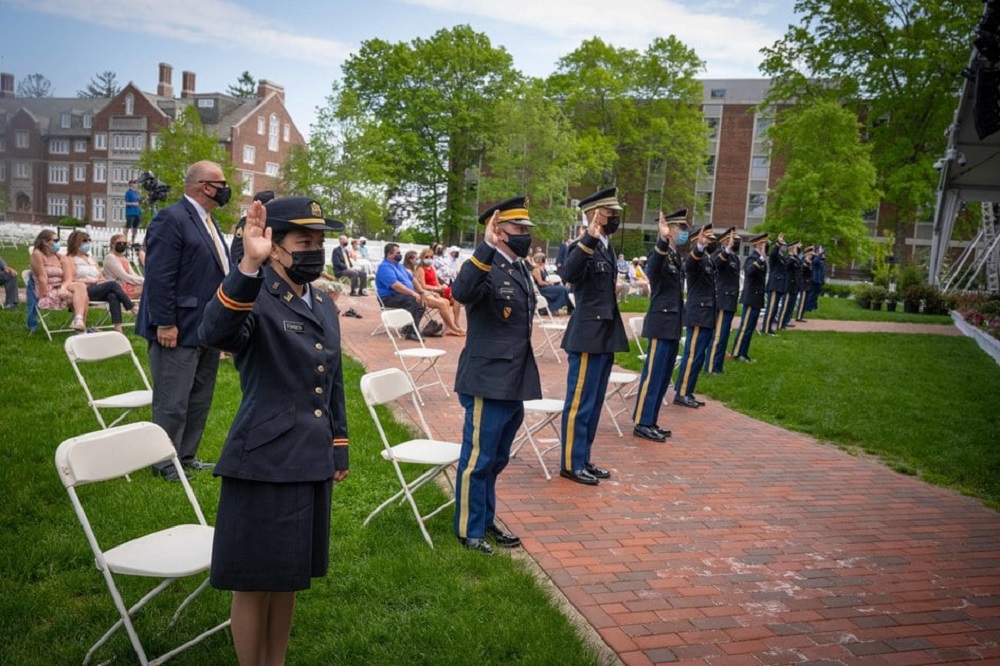 ROTC cadets are sworn in as 2nd lieutenants in the U.S. Army and Air Force

Twenty-two newly minted military officers were advised to remain humble, listen to their subordinates, and adhere to their core values as they embark on their military careers, during WPI’s Joint Commissioning Ceremony held May 21.

“Not only are you about to graduate from some of the nation’s most prestigious colleges and universities, you are also about to become commissioned officers in the United States Army, Air Force and Space Force,” he told the cadets minutes before they took their oath. “I congratulate you on a job well done and welcome you into the profession of arms. 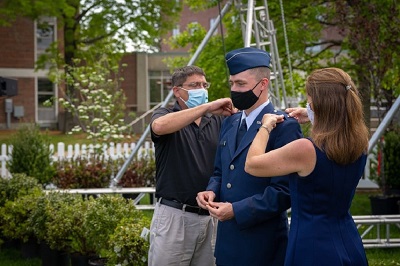 “With the pinning of 2nd lieutenant bars on your shoulders, you will be charged with one of the greatest responsibilities bestowed upon an individual: you will be expected to lead the nation’s sons and daughters with distinction and make tough decisions that will directly impact their lives. Carry that charter with pride. Listen to your [non-commissioned officers]. Don’t forget where you came from. Be humble. Remember, they are the ones who will ultimately make you successful.”

Heppe cited the partnership between Army ROTC and the Natick Soldier Systems Center, which has resulted in seven internships and four Major Qualifying Projects (MQP). “The collaboration between our research institution and the Army research labs is highlighted by the prospect of future military leaders working on future military problems,” he said. “We are extremely appreciative and proud of our partnership.”

Prior to accepting their commission certificates and exchanging First Salutes, Bienlien had the cadets post on the grass in front of the stage, where friends and family members greeted them and pinned the gold 2nd lieutenant bars on their uniforms. Then as their names were called, the new officers individually crossed the stage, bumping elbows with President Leshin and saluting Bienlien, Heppe, and Skiles before crossing the stage to exchange their ceremonial First Salute.

The tradition of the First Salute dates back to the 19th Century British army, when newly commissioned second lieutenants would present a silver dollar to the first enlisted soldier who saluted them. During the Joint Commissioning ceremony most of the newly commissioned officers exchanged their first salutes with staff members of their respective ROTC units, while some exchanged salutes with friends of family members either serving with or retired from branches of the military.

The new 2nd lieutenants, their hometowns, institutions, and military assignments:

A video of the ceremony can be viewed here.