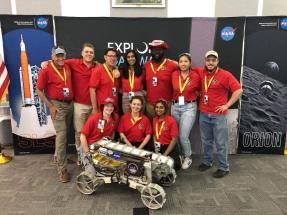 Can You Dig It? WPI Student Team Takes on a NASA Mining Challenge

This week robotics engineering students everywhere are abuzz as NASA prepares to host its first in-person Lunabotics Artemis Student Challenge since the pandemic began. A team of WPI students is gearing up for the competition, which brings together 46 schools from across the country to compete in a simulated lunar mining exercise using scratch-built robots.

Designed to educate college students in the application of NASA systems engineering, Lunabotics tasks students with demonstrating what is required for a sustainable human presence on the Moon and other off-world locations. NASA also noted that the skills developed in Lunabotics apply to other high-tech industries here on Earth that rely on its systems engineering principles.

Building a robot takes a team, and WPI’s travel team includes nine students—more than half of whom are women— who’ve been actively creating the robot Comet (named after a dog of one of the students) as part of a Major Qualifying Project. One rainy afternoon recently, two of those students, Manjusha Chava ‘22 and Karen Hou ’22, pored over what looked like a big conveyor belt on a bench at the Washburn Shops and smiled when Ken Stafford, their team advisor, popped in.

“We have some misalignment in a couple of gears here that we need to fix,” Chava told him. A sensor was also acting up, and she'd prepared to install a few magnets she said would solve the problem.

Everything was under control, Chava and Hou assured Stafford, a retired robotics engineering professor who helped pioneer WPI’s Robotics Engineering program and has advised student teams for years. Stafford, who will travel to Florida with the team, gently expressed some concern that the robot was still in pieces a few days before one of the students would be driving it to the competition. 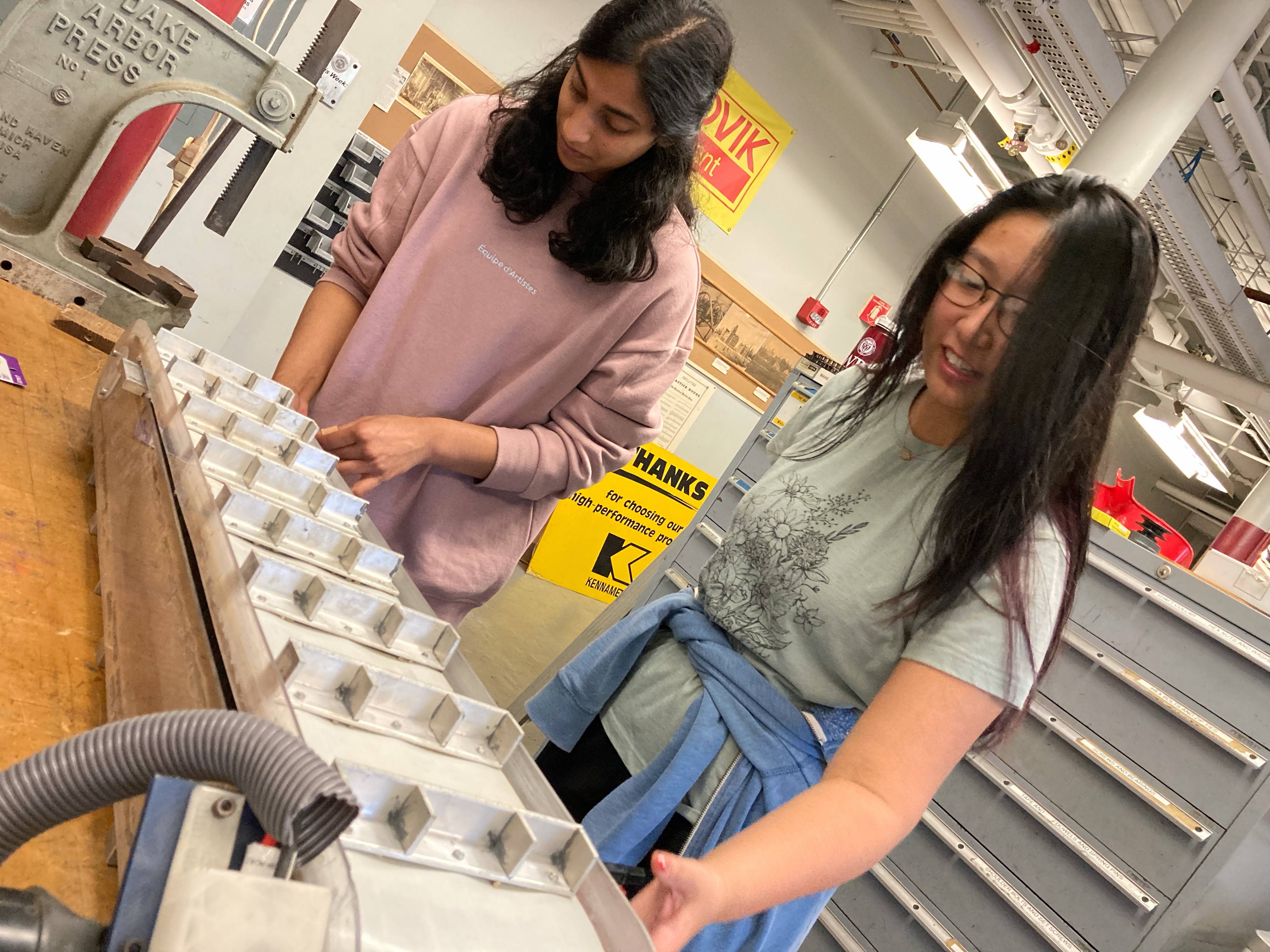 But Chava was confident and predicted that not only would the four-wheel-drive robot be back together in time, it would be able to scoop up the requisite kilogram of simulated lunar ice that forms the basis of the competition. “The robot accomplished that task in the test pit the team set up, and, other than some minor issues, everything has been working great,” she said.

Hou said that it has been rewarding just to see the robot the team built actually do what it’s supposed to do. Putting in all those hours of hard work paid off, and faculty advisors like Stafford were helpful along the way, she said.

The team will put its robot to the real test Thursday and Friday at the Kennedy Space Center (see sidebar for livestream information). Stafford said there is some prize money available that would go back into funding the program, but, for the team, it’s more about the thrill of seeing its robot in action. Plus, being part of a NASA Lunabotics team is a resume builder, and employers pay attention: Caterpillar is a sponsor of the competition and has a keen interest in lunar mining as well as more terrestrial applications, Stafford said. The competition also boosts WPI’s reputation among peer institutions.

“The motivation for students is, ‘we want to see how we did compared to other students,’” Stafford said. “There actually is quite a friendly collaboration between the different schools that show up there.”

The motivation for students is, ‘we want to see how we did compared to other students'. There actually is quite a friendly collaboration between the different schools that show up there.

The team’s participation this week adds to a rich history of robotics competition at WPI. In 2009 a WPI-sponsored team led by Paul Ventimiglia ’12 won an earlier version of the regolith challenge and $500,000. Other WPI teams have regularly competed in DARPA robotics challenges.

Stafford explained that in earlier Lunabotics challenges, teams were only required to develop robots that could mine the top layers of the Moon’s surface. But teams are now required to dig a little deeper, at least 30 centimeters, into a layer of limestone gravel that simulates the “icy-regolith” buried in the South Polar region of the Moon, according to NASA. 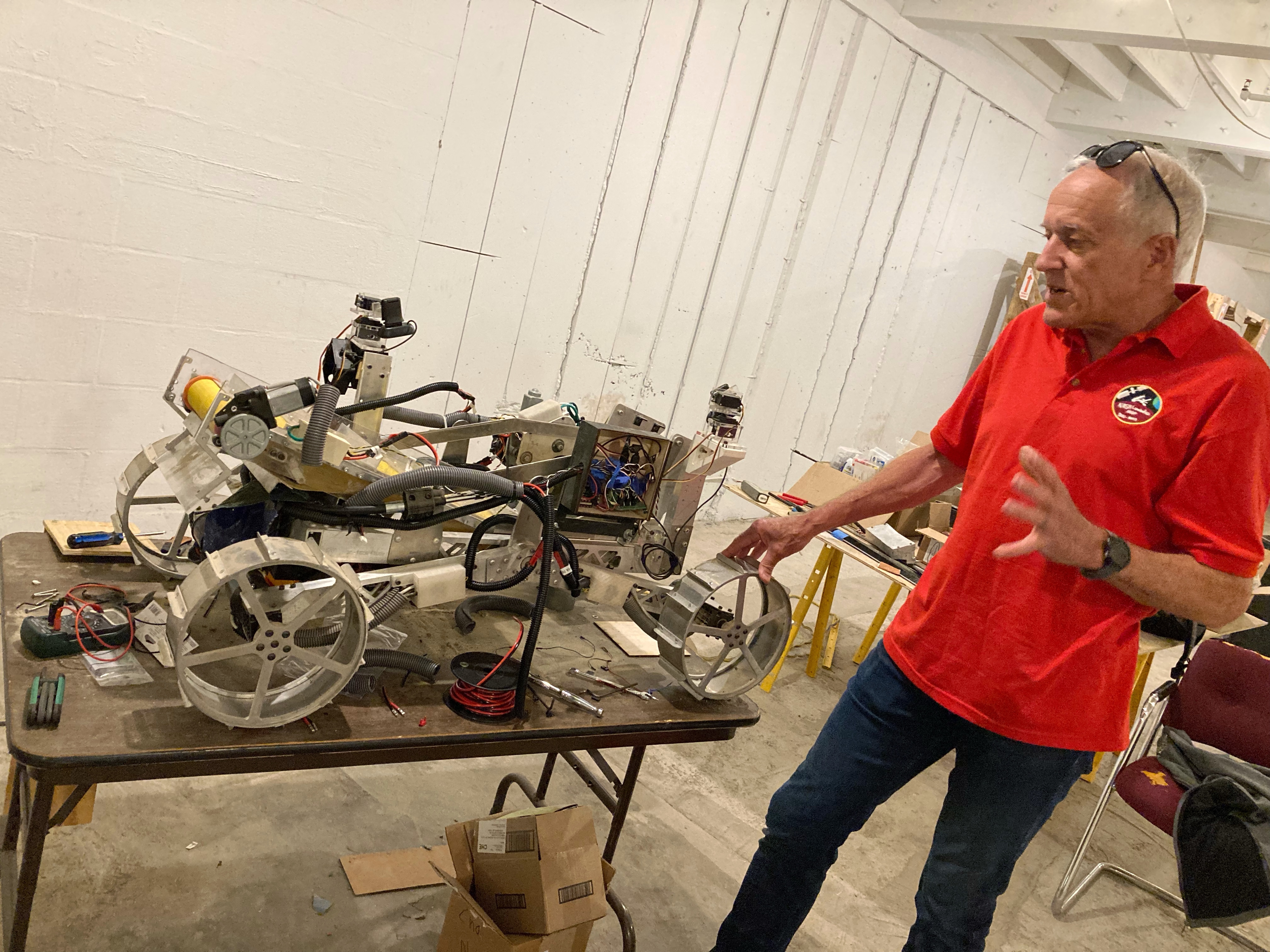 That might not sound like much of a stretch, but the new parameters present new problems: the simulated icy rock is hard-packed, unlike the sandy upper layers, Stafford said, which puts more stress on the small motors that drive the robot’s digger.

Other challenges add degrees of difficulty to the competition: the robot must navigate to a sieve to separate the sand and gravel it has scooped up; it also has to fold back up for transport. And while the mining challenge is one thing, getting to and from the dig site is another: the Lunabotics competition includes large obstacles and rough terrain in the large pit that the team must navigate, using a mix of autonomous operation and remote control.

The WPI team developed innovative solutions to these challenges as they built the robot. For example, they equipped it with two cameras for better user navigation and gave the robot a system of pivots, rockers, and cables that ensure all four wheels are always on the ground.

Nikita Jagdish ’22 said she was proud of what her team accomplished in a somewhat compressed timeframe. The team spent so much time together they became good friends, which in turn made it easier for them to work together. And drawing from several areas of study created a team in which everyone had something to contribute.

“Over time we learned what everyone was good at,” Jagdish said.

She said having half the team—and more than half of the travel team—made up of women was not something she found particularly noticeable, and as a woman she never felt sidelined.

“It is exciting to see so many women and people of different backgrounds getting interested in robotics,” she said.