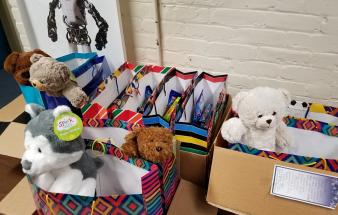 Wearing a mask and maintaining proper social distance has become a necessary inconvenience in this time of coronavirus, and restrictions on gatherings and visiting friends and family have an emotional cost. Despite best efforts to avoid the virus, numerous members of the WPI community have had to quarantine after being identified as close contacts of someone who has tested positive for COVID-19, or they’ve had to isolate after testing positive themselves.

WPI’s Health Services staff provide care and contact for students in isolation and quarantine—a period of time that can be stressful and lonely and bear an even higher emotional cost—and the community has worked to reduce stigma and give support. A group of students, assisted by a local congregation, has taken extra steps to help raise spirits, as well.

In October, members of the InterVarsity Christian Fellowship and their advisor, Professor Nick Bertozzi, senior instructor in Robotics Engineering, realized that a number of students were physically cut off from their friends and classmates, and thought about what they might do. When members of the Grace Presbyterian Church became aware of their concerns, a plan took shape, in the form of care packages.

The first batch, assembled by congregants and students, were delivered three weeks ago to WPI’s Student Development & Counseling Center (SDCC) for distribution to students in quarantine and isolation. The 10 packages contained stuffed animals, food, puzzles, and—perhaps most important—cards with messages written by the InterVarsity students. 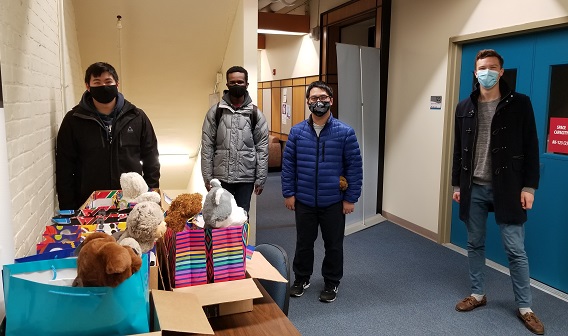 After getting the green light from Dean of Students Greg Snoddy, Joseph Yuen a BS/MS student in Computer Science, says the InterVarsity members  came up with a list of items student might like and partnered with Grace Church to purchase the items and assemble the packages.

“Members of the congregation pitched in buy stuffed animals, food, puzzles,” said Bertozzi. “One woman raises bees and makes honey. So, she makes little things of honey and bags of tea. The students write out cards.”

When the first packages were made there weren’t many students in isolation, but since then the numbers have increased, Bertozzi explains; the InterVarsity students must email for an appointment to bring the packages to the SDCC because they cannot deliver them in person.

Neither Bertozzi nor his InterVarsity students know who is receiving the care packages.

“The InterVarsity students thought that if they were in isolation, they would probably like to get something,” Bertozzi says. “Some students who are isolated probably don’t feel well, so it might give them some encouragement. The Bible says to help those who are sick. These students know it’s important for them to do that. They can’t do visits with their sick classmates.”

Jeffrey Mei ’22 (BME) dismisses the idea that the group made sacrifices to help out their fellow students, but says even small gestures can have a large effect. “I decided to do this because it was something easy to do, and because even the smallest things like these care packages are big to people who need it,” he says. “As Jesus said, ‘Do to others as you would have them do to you.’”

Yuen agreed, adding that spending the time needed to help out others at the university is a worthwhile goal. “We want to be a blessing to those around us, and with the recent increase in cases, we saw that there was an immediate opportunity to help and encourage our isolated peers,” he says.

Yuen says he doesn’t have any WPI friends who have been quarantined, but recently worried about a classmate who went through retesting. “I remember her anxiety about the situation,” he says. “Thankfully, she did not have the virus, but I imagine that anxiety is common and only grows in insolation.”

Bertozzi says the group will continue with its mission as long as there is a need. He has gotten feedback through Snoddy, who told him the packages are appreciated by their recipients.

What kind of personal touch does one put on the card when the one giving doesn’t know the person getting the care package? “I tell them just to get well and feel better,” says Mei, noting that even though the message is rather obvious, it is heartfelt and he hopes it helps.