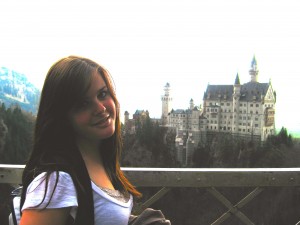 When recent biology/biotechnology graduate Hillary Cirka heard she was accepted for this year’s Congress-Bundestag Youth Exchange for Young Professionals fellowship (CBYX for short), anything she might have had planned for this summer didn’t seem as important.

After being waitlisted for the year-long cultural immersion exchange program fellowship, Cirka was thrilled to get the go ahead just before graduation, even if it means she has little time to brush up on her German. “It was always my dream to live in Europe,” says Cirka. “When you are learning a language in a class, you can only learn so much.”

“It was very unexpected,” Cirka says of her acceptance into a program, which initially sounded “too good to be true” when she heard about it through Professor Ulrike Brisson’s email. The CBYX offers 75 U.S. students and 75 German students a chance to study, intern, and live in each others’ countries. Funded by the U.S. Congress and the German Bundestag, the prestigious fellowship is open to students of all professional interests and is administered by Cultural Vistas, a New York-based nonprofit.

Although Cirka had traveled through parts of Europe before, it was her freshman spring semester at the University of Applied Sciences in Konstanz that began a deep appreciation of and passion for Germany. “When I was there, I knew I wanted to return,” she said. “Since I left, I have been trying to find a way to go back.” In the meantime, Cirka focused her studies to minor in German and joined WPI’s German Club, where she was vice president her senior year.

Brisson’s recommendation for Cirka’s fellowship application was straightforward. “I consider her a Germanophile,” says Brisson with a laugh. “She sought all opportunities to engage in German culture here. I was really happy when I heard Hillary got this.”

Although Cirka doesn’t know where she will study, work, or live yet, she is not worried. The program is divided into phases where she will learn as much of the language as possible in a language school. In late fall, she will move on to study at a German university. An internship, which Cirka hopes will be in Germany’s large biotech industry, lasts from late winter until the program ends in July.

The fellowship is about more than language, says Brisson. “When you are over there, the language becomes secondary,” she says. “You immerse yourself in the culture, and you are exposed to different opinions, different values. It is such an opportunity.”

Those experiences are exactly what Cirka anticipates. “I am most looking forward to being there all year and seeing all the seasons and being there for all the holidays,” she says. “That is a big part of the culture you only get to experience by being there.”

As Cirka spends the next few weeks preparing, she is just thrilled to be on her way. “I love Germany, and I love the time I have spent there,” says Cirka. “I thought it was a long shot to get in. This is a once-in-a-lifetime opportunity.”