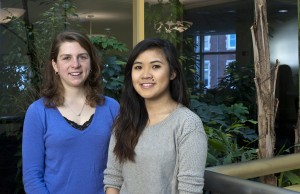 Both are recipients of the prestigious Congress-Bundestag Youth Exchange for Young Professionals (CBYX), a program funded jointly by the United States Congress and the German Bundestag.

For a year, they’ll be living with German host families, taking part in a German language immersion program, studying at a German university or technical school, and working in a paid internship in a firm relevant to their fields.

The highly competitive fellowship goes to 75 Americans between the ages of 18 and 24; 75 young Germans are also chosen to come to the United States.  Administered by Cultural Vistas, a nonprofit promoting international exchange, the program brings together diverse young professionals from a host of fields. 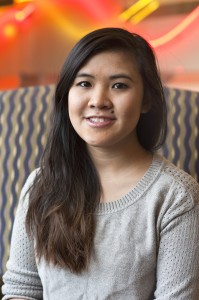 “This scholarship really means opportunity for me,” says Christina, who is an electrical and computer engineering major with a minor in German.

Previously, she has only been abroad to visit family in Laos. While studying German at WPI to fulfill her humanities requirement, she realized how much “I love learning different languages. I really want to travel and see everything I’ve been studying about in my German courses.”

Her introduction to the CBYX program came from the opposite side of the exchange, when a couple of young Germans pursuing their CBYX internships in the Worcester area reached out to WPI’s German Club.

“The program sounded amazing:  a chance to work in Germany and really get to experience a different culture through an organization that took care of the participants,” she says. 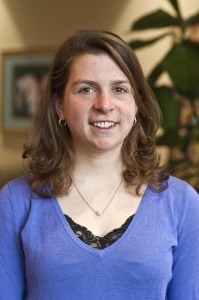 Sonja Kent, from West Boylston, is an industrial engineer with additional interest in “business and operations, from finance to marketing.  In the short term, I would love to be able to apply my engineering problem-solving skills to business problems in a business operations role. Ultimately, I hope to be in a management position, looking more at the big picture.”

She first heard about the program from her German professor, Ulrike Brisson, who notified her students about the application process.

For Sonja, the venture is not only the first step in a potential international career, it is also a return to happy memories of childhood.

Due to her father’s job, she lived in Germany for two and a half years when she was in middle school. She attended an international school where everyone spoke English, but “I was on a German swim team and we lived in a wonderful German neighborhood. Weekends consisted of bike rides, beer gardens, skiing, and family time, and that is what the culture really encouraged. This is what I fell in love with and I picked up German quickly just because of our daily activities.”

Both Sonja and Christina describe the CBYX application process as rather long and daunting, though they enjoyed the February interview at the German Consulate in Boston that was the hallmark of the first cut.

They were notified of their acceptances at the beginning of March, and both are beyond excited about the opportunities that await them.

Not only do they hope to perfect their German language skills through immersion in a variety of contexts, from the host family to a work setting, but they are both aware that they will serve as informal ambassadors themselves.

“I am also really hoping to be able to bring something to Germany, whether it is sharing my American culture with my potential host family, helping in the community, or being a contributor to the company during the internship phase,” Sonja says.

After all, concurs Christina, “we are diplomats for the United States, immersing ourselves in a whole different way—into the lives of families, the universities, and the workforce.”