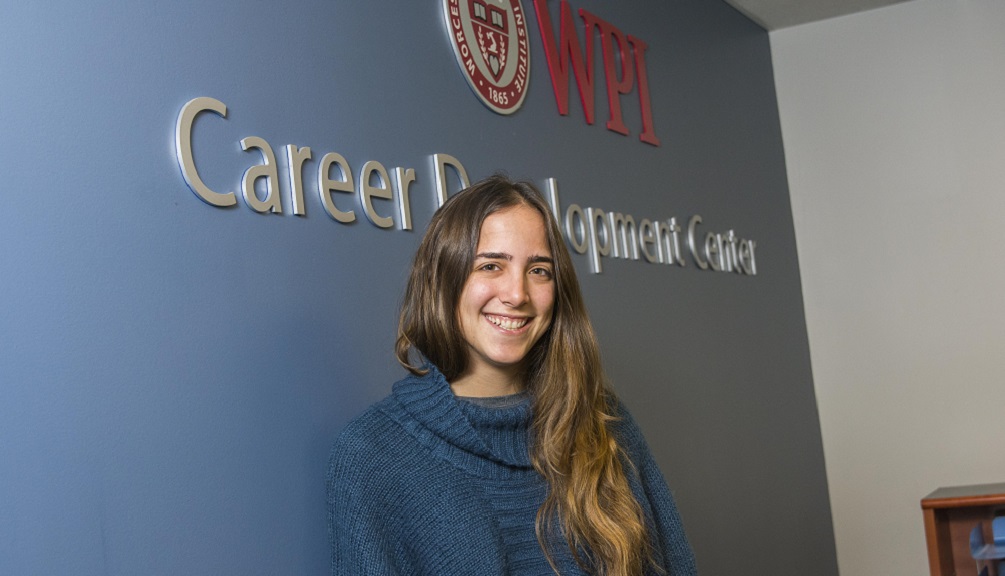 The CDC: Her Job-Search Secret Weapon

Camila Di Fino Napolitano ’18, an electrical and computer engineering major minoring in computer science, landed a full-time job with Microsoft in Seattle. Her path to this position took a few twists and turns, but there was a major force in her career-exploration toolkit: WPI’s Career Development Center (CDC).

Napolitano, from Venezuela, first worked at the CDC in her sophomore year.

“I applied for the job there using resources they had,” she says, and she became a member of the CDC social media team. “That position gave me a lot of insight,” into the center and its offerings and how easy it is for students to access them in one place."

As the person who posted such events online, she would learn about planned workshops, career fairs, resume review sessions, and other opportunities—some featuring leaders from top companies who graduated from WPI. Napolitano attended many, and would text these events to friends; one got a job at Texas Instruments after attending an event Napolitano told her about, where a representative from the company was present.

Before figuring out how to go about her job search, Napolitano had to first explore what interested her in terms of a career. She liked math and science, and came to WPI as a biomedical engineering major. But when she tried some electrical engineering classes, something just clicked. She changed her major in her freshman year.

“I like the fact that it’s very project-based,” she says of her adopted major. “We not only learn theory, but are able to build stuff, the things you use in your everyday life. It’s very hands on.”

Once identifying an industry she found rewarding, Napolitano set about fulfilling her goal of having several job offers to choose from by graduation.

“I always come here and ask for advice,” she says of the CDC.

Using CDC services and the access the center provides to various companies and their representatives, Napolitano completed two internships for Delphi, a tech company serving the automobile market. One was in California, where she did software engineering, and the other was in Indiana, as an electrical engineer doing microelectronics in the Powertrain division, one of the most traditional areas of the company.

She learned that she enjoyed the software work more, and would ultimately prefer being in a big city.

With those preferences narrowed down, Napolitano benefited from resume feedback, and knew the advantage of having experiential education opportunities during her time at WPI to build her resume, which contributed to her success with the full-time job search.

“Whether you are exploring a variety of options or following a specific path, the CDC provides expert advice; cutting-edge online resources; and connections with industry.” -Amanda Dionne

Networking and professional development opportunities also came Napolitano's way via her involvement in the Society of Hispanic Professional Engineers (SHPE). She attended its annual conference several years in a row, resulting in one of her job offers.

Amid her career education, networking and workshops, she had a goal of applying to five companies a week. After applying to “a million jobs” located all over the U.S., she fulfilled her goal of having several offers before graduating, accepting the one from Microsoft.

Both Napolitano and Dionne call the CDC a place where students can explore what they might want to do as a career and then make a plan to pursue it. It’s not only a resource for students who have a clear goal in mind from the start.

“If it sounds interesting, try out different things. There are people that know their goal and they just build for it; then there are people who are like a butterfly,” says Napolitano. “It doesn’t mean it’s bad, you’re just more well-rounded when you know what you like and what you don’t.”

After helping them research professional fields, Dionne says that the CDC is a proven asset.

“Students like Camila, who utilize the CDC throughout their time at WPI, increase their opportunities for success in the marketplace,” says Dionne. “Whether you are exploring a variety of options or following a specific path, the CDC provides expert advice; cutting-edge online resources; and connections with industry.”