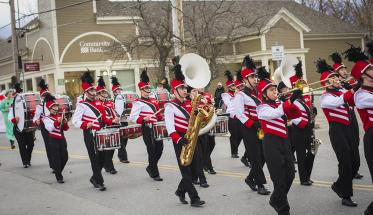 WPI’s campus is especially quiet at four in the morning.

Members of the Pep Band and cheerleading team know that fact all too well—running on nervous energy and caffeine, they all had arrived outside Alden Memorial one Tuesday in December, ready and waiting to board buses to Vermont so they could perform in the opening ceremony of The Bachelor franchise’s new spinoff series, Bachelor Winter Games.

Not exactly the way they’d expected to close out B-Term.

Pep Band president Veronica Rivera ’18 says the band was initially contacted by Bachelor producers about the opportunity on Tuesday the week before Thanksgiving; they found out they had been chosen to perform on the show six days later. 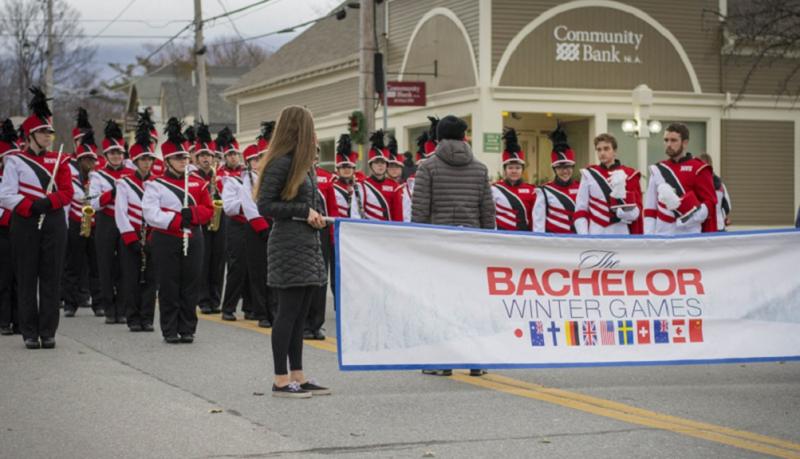 The Pep Band prepares to march down Main
Street as part of the opening ceremony of Bachelor
Winter Games.

“I was sitting in my MQP lab when I got the email,” Rivera says. Two of the three members of her MQP group were also part of the band, she adds, and “I immediately told them and we all screamed a bit and celebrated.”

After more screaming and messages written in all caps, reality settled in throughout the group as the quick turnaround of the request hit them: they would be on the only band performing on the show, and had less than two weeks to practice for a performance that would be seen by millions of people around the world.

So, y'know, no pressure.

“We scheduled an emergency officers meeting the next day and planned out our end of the event for a few hours,” says drum major Clifford Smith ’19. Assistant drum major Ethan Lauer ‘20 further explained their process: they held several practices to review the music they’d be playing (WPI’s alma mater), as well as marching around the track to prepare for performing in the cold.

By December 5, the date of the taping, they—as well as the cheerleaders who would also be making the trip—were ready for their close-ups.

After a four-hour-long bus ride to the town of Manchester, Vt., the group was greeted by a Bachelor producer who wasted no time in getting down to business.

“Hi, welcome to Vermont! We’d like to run a dress rehearsal in about five minutes, so if you could get ready…”

This could have been cause for alarm, concern, panic, a desire to get right back on the bus and head home, but the band members took it in stride. Rivera smoothly relayed instructions and updates from the producer to her band mates, ensuring that everyone had what they needed and, ultimately, ensured that the band was ready to go in four minutes and thirty seconds flat.

WPI's Pep Band, color guard, and cheerleaders spent one Tuesday in December filming a performance that would be seen by millions of people the day before Valentine's Day.

So, y'know, no pressure.

“As we were lining up [for the dress rehearsal], I was hit with a sudden realization of what a large production we were taking part in,” Lauer says.

He was right. From the crowd lining Main Street to the camera crews, producers, and photographers, the students found themselves in the spotlight.

And they nailed it. 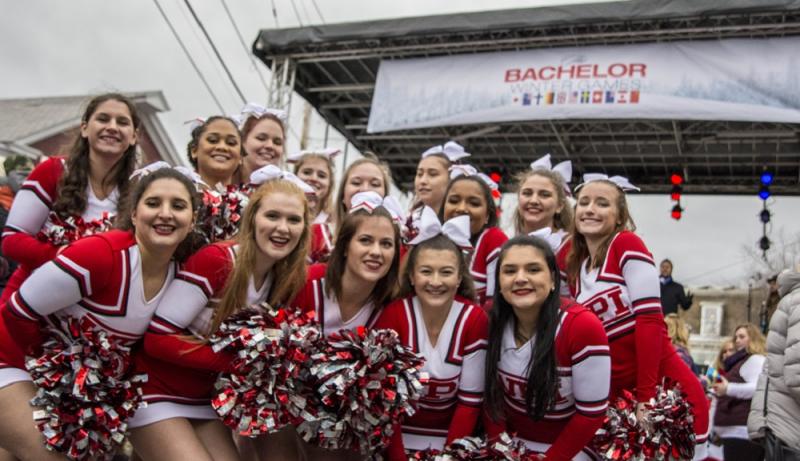 The cheerleading squad poses in front of the Bachelor
main stage.

With Smith and Lauer leading the way, the Pep Band opened the event as the bachelors and bachelorettes from Team USA walked the parade route, followed by the color guard and cheerleaders, who provided excitement and energy throughout the rest of the parade.

The crowd of hundreds gathered in front of a massive stage and was greeted by the man, the myth, the legend, Chris Harrison himself, who welcomed spectators and competitors alike. He then oversaw the performance of the Bachelor Winter Games anthem—there’s got to be a unifying anthem for such a global event, after all—and ushered in a new season of love, drama, and roses with a musical performance and confetti cannons.

Just like that, the Bachelor Winter Games had begun, and WPI students and their talents had led the way.

“I always like to think that we’re great, but to have a producer from such a large show recognize our talent felt a bit surreal,” says Rivera. “I’m still not really sure how they found out about us and decided we were the best option, but I’m very thankful that they did.”

For Rivera, one of her favorite parts involved meeting the cast members, something she didn’t think would happen. In fact, many Bachelor contestants stopped by the band’s break area, offering hugs and compliments so often that they eventually had to be told to head back to the set or risk holding up the shoot. 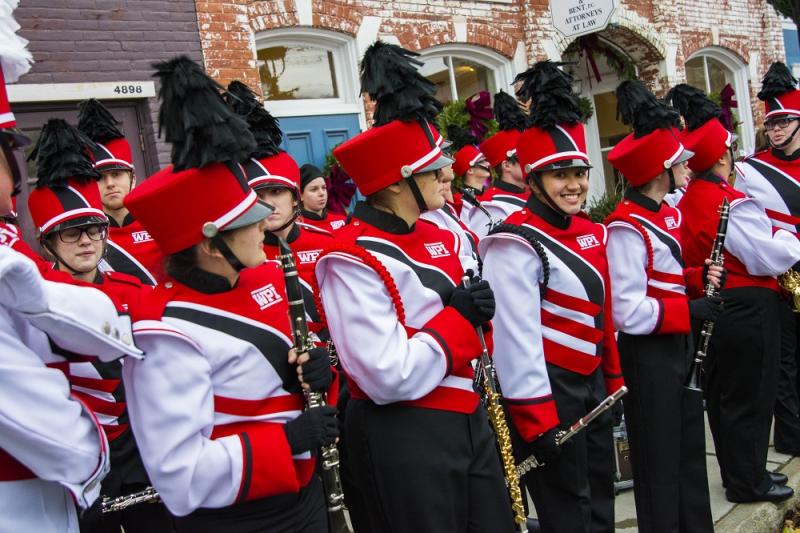 Members of the Pep Band are all smiles after a
successful performance.

“The cheerleaders and pep band were the best I’ve ever seen,” said past Bachelor Ben Higgins after the conclusion of the parade. “WPI is awesome.”

After a quick lunch—and several more hugs and selfies with the cast, of course—the students shook the excess confetti from their hair and uniforms and were back on the road, returning to campus well before dinnertime.

And just like that, their whirlwind of a day had ended.

With impossibly early wake-up calls, harried dress rehearsals, and the task of marching through the cold with the constant threat of rain looming overhead, all in the course of less than 12 hours, you have to wonder: would they do it again?

Each performer agrees about the memorable success of the day, but it’s Lauer who sums it up best: “Nothing brings a diverse group of people together like friendly competition, love, and symmetric bone structure.”

Some Extra Pep in Your Step

Looking for even more pep? Check out the Daily Herd profile on the Pep Band.