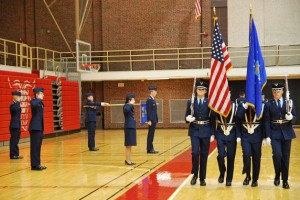 The ceremony, held in Harrington Auditorium, featured the precision marching and decorum of a formal military ceremony. As the parade of detachment groups marched onto the floor, Cadet Savannah Redetzke read the history of the Air Force and the Air Force Drill.

The wing staff relinquished their command to the new wing commander and deputy, and each group commander marched their flight past the reviewing stand. 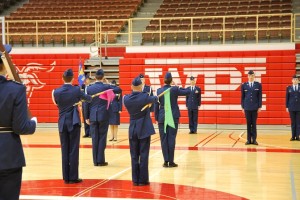 Following the ceremony, DeRosa met with the wing and offered a few words about the year’s accomplishments and his observations on Creaghan’s leadership.

“When I see Cadet Creaghan, I see someone who is strong, ethical, and at the same time, compassionate and caring. You have the toughness, and you‘re a real person. That’s very much appreciated in the Air Force.”

Creaghan was one of only a few invited by MIT Lincoln Labs for a summer internship last year, and to remain there do to her Major Qualifying Project. “It’s no surprise that she will go on to be a space operations officer,” DeRosa said.

“Last year she was selected for the Legion of Valor Bronze Cross for Achievement. Only one person per region is selected for that award.” Creaghan had been nominated for competition with 3,400 eligible cadets from 37 host universities in the 14 states of the Northeast region.

“The fact that she won that speaks volumes. It also reflects on the Cadet Wing here,” he said. “It reflects excellence. People look at those coming out of this program. They’re looking at you.”