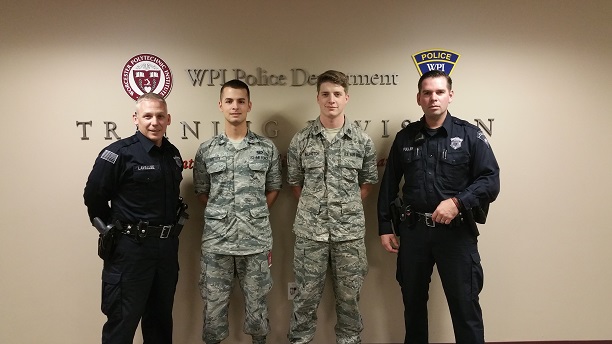 In the last several years, especially since the April 2007 Virginia Tech shootings, the threat and reality of school shootings has become readily apparent. In fact, there have already been several shootings and threats around the country this school year, including this month’s killings at an Oregon junior college, and the fatal shootings at Texas Southern University and Savannah State University. Due to these all-too-common tragedies, as well as recent threats to military recruiting stations, the leadership at the Detachment and campus police officers organized this training in the Detachment’s duplex on Institute Road.

Cadet Jacob Billington worked with detachment commander Lt. Col. Michael DeRosa and the WPI Police, including officers Chad Gaylord and Brian Lavallee, to bring Sgt. Michael Jacobs in to give the detachment a briefing on how to respond to an active shooter. He said there are three recommended options for reacting to an active shooter: run, hide, and fight. In any situation, if possible, choose the run option. It is integral in this situation for a person to know the layout of the building they are in. He spoke about mentally running through scenarios during free time or when entering new surroundings. One should think about where to hide and where to run, as these threats can come at any time and from anyone. And, if necessary, adopt what is known as a “survival mindset” in preparing to physically fight off the attacker.

READY FOR A TEST?

Toward the end of Sgt. Jacobs’s presentation, officers Gaylord and Lavallee burst through the doorways unexpectedly, shouting, “Get down!” Nearly every cadet panicked and immediately dropped to the floor and froze. This occurred immediately after the class spoke about making lifesaving decisions quickly. The entire simulation was over within 45 seconds. The cadets’ hearts were pounding. This concluded the active shooter training for the day. At least, that is what the cadets assumed.

As the cadets moved on to different activities, the officers came back, this time covering the entire building. This time the cadets knew how to process this abrupt disturbance. Many cadets were able to find places to hide – behind bookshelves, in closets, and under tables. Some were able to run from the situation and others used items around them as makeshift weapons to protect themselves. This time no one had frozen. The cadets knew to spread out and be prepared, so when they came back a third time that day, there was an instinctual response.

The WPI Campus Police and AFROTC Detachment 340 put together a practical lesson for the cadets. This drill was a step toward making WPI a safer and more prepared campus. The cadets found the training to be a benefit to students and faculty, exciting for participants, and potentially lifesaving.