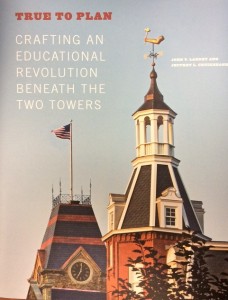 Editor Mike Dorsey, WPI’s director of research communications, says True to Plan is a sequel to Two Towers, which chronicled WPI’s first 100 years. Within the new book’s 248 pages, it was a challenge to document the growing pains and many changes the Institute underwent as it developed its revolutionary academic approach.

As essential as the WPI Plan is today to WPI’s identity, Dorsey says a book that doesn’t also tell the story of the students who infuse WPI with its very intent leaves out the real purpose behind the Plan. While focusing on the most influential social and campus changes, the book’s authors and designer took pains to highlight the student experience over the years. “There are only so many stories you can tell,” says Dorsey. “We focused on the big picture and all the big changes and players in the main narrative, but used sidebars and a multitude of photos to tell another layer of stories.” 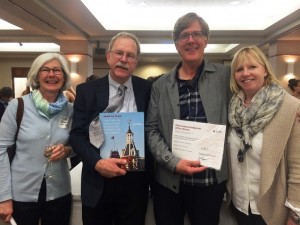 The New England Book Show award, presented at an awards dinner at Symphony Hall in Boston on May 3, honored the way the book’s design, created by freelancer Rick Rawlins, wove together those many stories. While the text in the book details how some of WPI’s defining academic ideas—The Plan, the Global Projects Program—came to be, it’s the pictures, captions, and sidebars that tell the silly and serious stories of students and activities that have made WPI so beloved to tens of thousands of alumni over the years.

In its 59th year, the Book Show is a juried event sponsored by the nonprofit Bookbuilders of Boston that recognizes the work of New England publishers, printers, graphic designers, and developers of print and digital media. 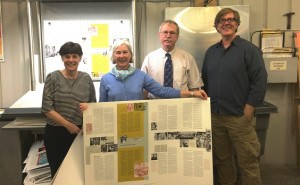 The PINE award recognizes the steps in book production that few think about—like use of specific paper or color. According to press from PINE, books that receive the Pinnacle Award must be “flawless to win” and so every category may not give out a Pinnacle Award unless it meets the rigorous criteria. Working with Puritan Capital printers, Dorsey says the award helps call attention to all those small decisions that make a high-quality book.

Dorsey is a long-time WPI employee who is fascinated by WPI’s history, so having the opportunity to take this big-picture look at the people and events that shaped such a formative time in the university’s development and culture was exciting.

“You see how the university had its ups and downs, and you see the struggles and challenges,” Dorsey says. “Coming in now it looks like we are barreling along, but it wasn’t always that way.” As the Plan was gaining traction, the rest of the world barely knew of the institution, he says.

If the Plan is the backbone, the students and faculty are what give WPI its life, and Dorsey knew telling the students’ story—from phasing out the common nickname “the Tute” for “WPI,” to the arrival of women on campus—was essential. Rawlins, Dorsey says, expertly used illustration to tell the second story of student experience in the book.

Working with the History Book Committee, alumni, and the Curation, Preservation, and Archives staff in the Gordon Library, the book’s production team, including writers John Landry and Jeffrey Cruikshank, sifted and sorted through photographs, collected stories, and conducted interviews to compile a true picture of five decades.

The book covers just a third of WPI’s history, but those years were transformative, Dorsey says; “the journey from what the Institute was in the 1960s to what we are today makes for an amazing story.”