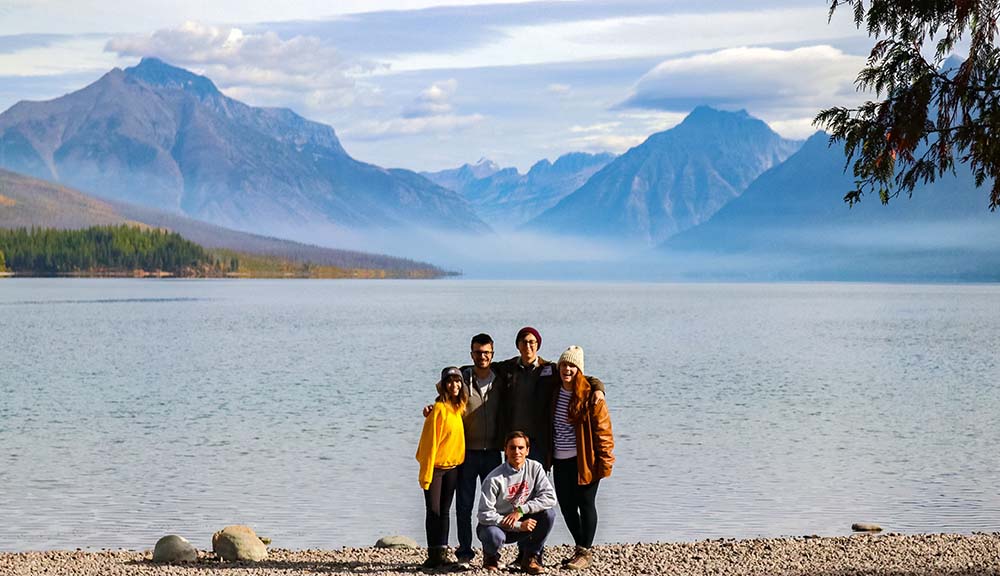 A Change of Plans for IQP

It’s always exciting when students prepare to depart for their IQP experiences, but there’s an added spark when they’re going to be the inaugural group to travel to a particular project center. That was the case for Claire Barrameda, Liz Callahan, Andrew Hand, Daniel Oates, Trevor Rizzo, and Thomas Vose, who were all set to be the first group of students to travel to one of WPI’s newest project centers—in Montana’s Glacier National Park.

Glacier was one of the areas ravaged by devastating wildfires in 2018. After careful monitoring, the Interdisciplinary and Global Studies Division (IGSD) team—which is responsible for all non-academic aspects of the Global Projects Program, from housing and confirming program dates to creating on-site handbooks and operating a 24-hour emergency line for all project centers—decided it would not be feasible to begin the project work in August due to safety issues and travel restrictions. The trip was then postponed four weeks.

Recognizing the students would not be able to spend the entirety of their IQP in Glacier National Park as planned, project center director Fred Bianchi, who also serves as director of the Bar Harbor Project Center situated within Acadia National Park, suggested the idea of the students completing their work—which would be able to translate well from one park to the other—in both locations. Assistant director of the Global Projects Program Erin Bell worked closely with Bianchi to prepare this contingency plan and relay it to students, helping them coordinate plans to get to Maine instead of Montana as seamlessly as possible.

"It was an elegant solution, and one that really worked out well," says Anne Ogilvie, executive director of the Global Projects Program.

This is not the first time that weather or natural disasters has forced the IGSD team to quickly change course. The situation has echoes of the one faced in 2017 by 22 students whose plans to travel to Puerto Rico to complete their IQP were derailed by Hurricane Maria. With the hurricane destruction making it unsafe for students, the IGSD team, along with faculty advisors and others, worked tirelessly behind the scenes and in just weeks helped the students shift their project work to something closer to home, and just as meaningful—organizing relief efforts and helping island citizens resettle in Worcester.

The project team ended up spending four weeks in Acadia and three weeks in Glacier. Because many national parks are experiencing similar problems, they were able to pursue the same projects at each park with minimal adjustments so that both parks could benefit from the students’ work.

“The students were amazing. They saw something new and interesting in every obstacle. That’s exactly how every WPI student must approach the experience of working off-campus.” -Fred Bianchi

“We were able to take a situation that had ‘failure’ written all over it and turn it into a success that was beyond what we could have imagined,” says Bianchi, describing his pride at the students’ flexibility, openness, and excitement as they immersed themselves in both parks. The experience even sparked a potential idea for future off-campus experiences: having students travel to two or even three different parks over the course of a single term.

Barrameda, who studied the feasibility of implementing webcams to monitor traffic in both venues, says that getting to see how two national parks on nearly opposite sides of the country approached and tackled the same problem was especially interesting.

“There was a lot to learn at each site,” she says, “and going to a well-established project site before diving into a brand new one helped us, as well.”

“It was a great exercise in improvisation,” adds Oates, whose team worked with each park recommending reservation systems to help combat overcrowding. “Lots of our original plans fell through and we had to adjust significantly in order to still deliver a useful end product. Getting practice working in a high-uncertainty environment made me a better and sharper leader, for sure.”

While it may not have been a typical IQP experience, the students did what WPI students do best: they embraced the challenge and were ultimately able to craft together a memorable and impactful seven weeks of project work.

“They were amazing,” Bianchi says. “They saw something new and interesting in every obstacle. That’s exactly how every WPI student must approach the experience of working off-campus.”