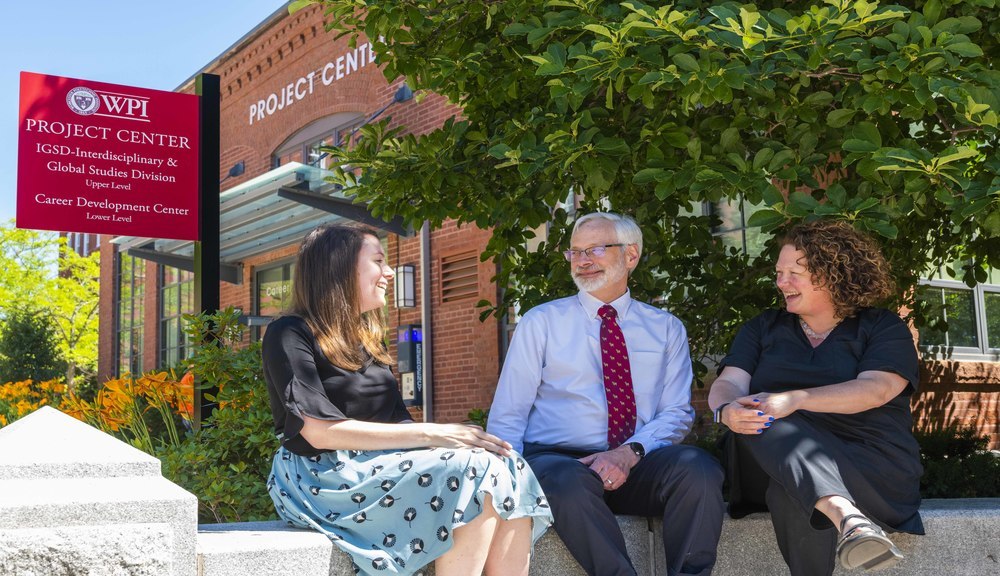 For more than 100 years, each class graduating from WPI has offered a philanthropic legacy with a senior class gift. The legacies often included physical reminders of the class, such as public art—statues, sundials even the arbor swings at Higgins House.

The Class of 2018 kept the tradition (introduced by the Class of 2017) by choosing a less tangible gift but one with lasting impact. Last year’s class gift to the Global Scholars Program left no physical marker, but a huge benefit nonetheless. The Class of 2018 kept the theme going strong with its gift of $26,141.33 (plus $15,000 from trustee emeritus match donor Win Priem ’59) to support the newly established Glacier National Park Project Center. Especially noteworthy is the 55 percent of the class that participated in the fundraising efforts. Inspired by the late William “Tuna” Trask’s unwavering support to WPI, the committee also funded a Glacier project center scholarship in his memory.

Tracy Baldelli, class gift advisor and associate director of annual giving, and the group tossed around a few ideas and began to envision how their donations could align strategically with the university’s goals of a global education. While some felt that a physical memorial to Trask would be fitting, the committee ultimately decided that a scholarship in his name would best honor his memory.

Jaime Stephen ’18, who co-chaired the Class of 2018 Senior Class Gift Committee with Julie McLarnon ’18, says the process of finding an appropriate, agreed upon, and approved choice was eventually narrowed down to a mix of many elements. “What won over the committee was funding for the new project center at Glacier National Park and the scholarship that would be named in honor of Tuna," he says. "The idea of starting a new project center was cool, and it also helped promote President Leshin’s strategic plan.”

Combining different elements of separate ideas helped the committee find a common denominator. “We promoted the global idea,” says Baldelli, “but we didn’t think of the project center. They did that themselves.” Stephen and McLarnon say they wanted to “inspire meaningful philanthropy this year and lifelong engagement in the years to come.”

Working with Kent Rissmiller, Anne Ogilvie, and the Interdisciplinary & Global Studies team, the class gift committee heard how supporting a project center would fit their requirements and allow them to honor Trask. The influx to the Glacier National Park Project Center will be used to offset any of the $40,000–50,000 annual project center expenses, says Baldelli.

Donating the class gift to a global initiative also opens doors for the university to expand the existing relationship with the U.S. National Park Service and also to accommodate the increasing student interest in those project centers. According to Rissmiller, applications to project centers are growing substantially, so WPI seeks to provide off-campus projects for all students. This effort drives forward a WPI initiative that benefits the national parks, the students and faculty, and the university on a global scale.

According to Rissmiller, dean ad interim of interdisciplinary and global studies and director of the Washington DC Project Center, the ripple effect of this class gift give a boost to the university’s partnership with the Park Service that began with the Bar Harbor Project Center and the Washington DC Project Center. “We have found a really good project partner in the Park Service,” says Rissmiller. “The parks lack adequate funding and face a tremendously growing visitor population. They need to provide these opportunities without overrunning resources. This is a great opportunity for students interested in resource preservation and education.”

“I think the senior class had a lot of imagination and foresight to envision how this type of early support could eventually enhance and change lives in the future.” -Fred Bianchi

Ogilvie, executive director of WPI’s Global Projects Program, says the students’ thoughtful approach paves the way for immediate and future possibilities. “The students see the same opportunities in the National Parks partnership that we do,” she says. “There are such interesting initiatives happening in the parks. There are many citizen science projects to collaborate on.”

Donating less tangible gifts is investing in the future. “It is important to think wisely about the gift so it is applied in ways that are sustainable,” says Fred Bianchi, professor of music and director of the Glacier National Park Project Center. “In 20 years from now, for example, WPI students should be involved in certain activities in Glacier that they can look at and say, ‘Oh yes, the 2018 Senior Class is responsible for this.’”

WPI’s culture of philanthropy has always been an important part of the university philosophy. For Baldelli, watching the students develop their ideas of giving back and the power they have to make an impact is rewarding. Choosing a gift to make an impact without knowing the direct results isn’t easy. “I think the senior class had a lot of imagination and foresight to envision how this type of early support could eventually enhance and change lives in the future,” Bianchi says.

The process is a yearlong one, and the students tend to gather steam as the year goes on. They begin to realize how their efforts will help other students, and they reflect on how their own time at WPI was shaped by donors’ generosity throughout the years. “This is the start, but not the end for them,” says Baldelli. “It’s the beginning of staying engaged with the university and financially supporting the institution.”