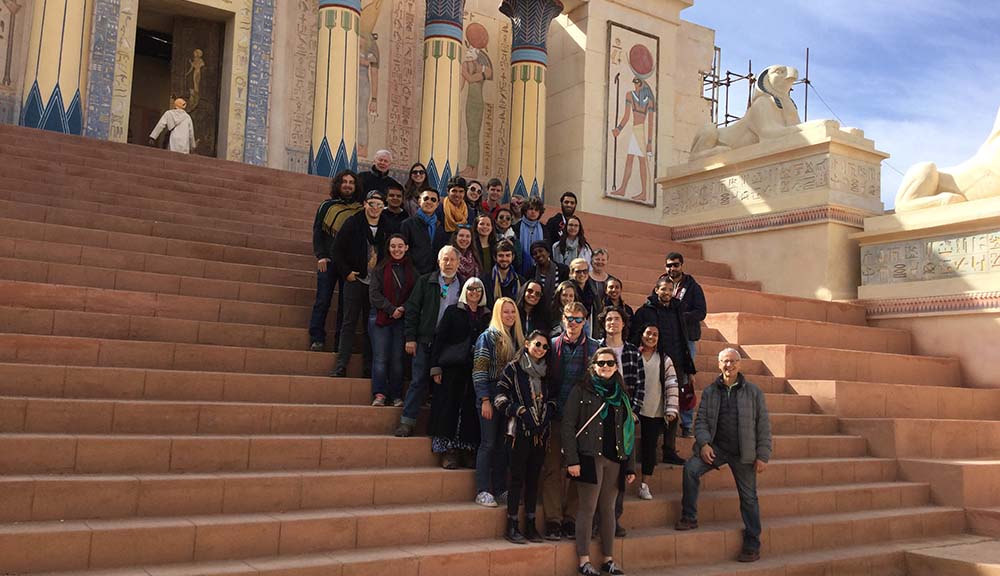 Channeling the Humanities in Morocco

A WPI education has become practically synonymous with “project work,” and for good reason. Required projects that give students the chance to earn real-world experience while continuing their studies lead to invaluable skills and connections by graduation.

While most associate project work at WPI with the Interactive Qualifying Project (IQP) and Major Qualifying Project (MQP), there’s a third project students must complete: the Humanities & Arts (HUA) Requirement. Giving students the chance to channel their inner thespian, writer, musician, and more, the HUA Requirement encourages the exploration of subjects such as art, architecture, history, literature, and religion to complement their work in the sciences.

And in true WPI fashion, students don’t necessarily have to complete this work in the classroom. The HUA Requirement can be fulfilled at one of four off-campus project centers, one of which is in Rabat, Morocco. Students interested in traveling off campus for their HUA Requirement are encouraged to apply to the program in C-Term 2019.

As part of their time abroad, students will complete one full unit of work, made up of an intensive course on Darija (Moroccan Arabic dialect) and a blog focused on student experiences with the people and places of Morocco. Additionally, each student is required to complete an independent study research project that deals with Moroccan or Islamic history, culture, or society.

The final research project is often an aspect of Moroccan or Muslim culture that students find particularly interesting. Past project topics have focused on women and Islam, gender roles in Morocco, the Arab Spring, Berber customs, the influence of French colonialism, and protest music in Morocco.

Bland Addison, associate professor of humanities and co-director of the Morocco Project Center, encourages students to complete their HUA Requirement in Morocco for many reasons: the educational value of travel, learning about new cultures, and earning humanities & arts or international studies credits toward degree requirements.

For Addison, though, there’s one reason that he considers the most important. “It gives students the chance to meet Arab and Muslim people, and get to know who they really are,” he says, as opposed to stereotypes that are often depicted in the Western world. According to Addison, students are expected to use scholarly texts for their work, but the most important lessons will come from the students interacting with the Moroccan people themselves.

“We don’t want them to produce a book-driven thesis,” he explains, adding that he and the other advisors at the Morocco Project Center want the students to learn through the people they meet and places they travel to. “They can study history or foreign policy or other important topics, but we want them to do that and form opinions by talking with the Moroccan people.”

Rosa Reynoso ’20 was able to do just that. After meeting and becoming friends with twin sisters and fellow college students, Reynoso was invited to their family’s home in Jorf El Melha, a rural town north of Rabat. She was welcomed with open arms, and the girls’ grandmother (or jdda) explained how she considered her to be a daughter and gave her a royal blue djellaba, a pair of traditional Moroccan shoes, and a silk scarf.

“I couldn’t get over the hospitality of this family,” Reynoso wrote in her blog. “What I think surprised me the most was how little I could communicate with them due to my lack of Darija and how they still were so kind and generous.” She went on to explain it was that visit—not riding camels in the Sahara or skiing in the Atlas Mountains—that was the true Moroccan experience.

“It was one of the best decisions I’ve made at WPI,” says Reynoso. “It opened up my world.”

Any students interested in completing their HUA Requirement or earning a credit in International Studies in Morocco should email Addison or call 508-831-5190 before the April 9 deadline.