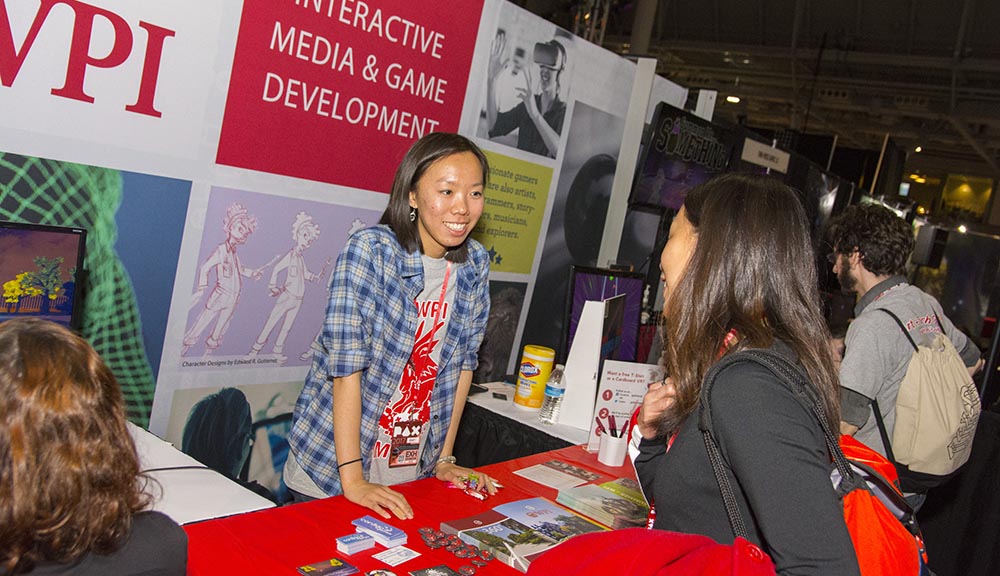 WPI’s Interactive Media and Game Development program is taking D-Term to the next level with alumni talks, gaming competitions, and a trip to Boston

IMGD students and faculty are taking the remainder of D-Term by the controllers, winning awards, welcoming alumni back to campus, and gearing up for PAX East, the annual tradeshow (PAX) held in different parts of the world for gamers.

At this year’s MassDiGI Game Challenge—an annual event held at Becker College in Worcester where aspiring game designers can pitch and launch new games—IMGD major Kelly Zhang ’18 and Tom Farro ’17 won first place in the Best Indie Game category. Their game, gARden, is an augmented reality (AR) gardening app/game in development for Android and iOS. With the app, players assemble a virtual plant and follow its growing progress with a tracking marker that can be printed out, or viewed on mobile devices. When viewed on a cell phone, for example, the plant "pops out" of the screen as if in real space. The plant then continues to grow in real time.

Even though this year’s challenge wasn’t their first, Zhang says her nerves were jittery.

“I still felt pretty nervous,” she says. “Over the course of the judging rounds, that nervousness slowly turned into excitement as we saw a lot of people react positively to our game and suggest features they wanted to see from us in the future.”

Farro says feedback from the judges was one of the best parts of the competition.

“What I always take away from events like these is to ‘just do it,’” he says. “You’ll never grow and learn different perspectives if you never put yourself out there. The worst thing that could happen is that you might need to go back to the drawing board. If people don’t like or understand your product, it’s better to learn that now, before it’s too late to make significant changes. Or maybe everyone loves your idea, and that will fill your sails to charge forward with twice the strength! Either way, you’ll come out of it a better developer.”

Alex Schwartz ’09, who majored in IMGD, returned to his academic stomping grounds to give a talk on his journey in the gaming world post-graduation. The CEO (Chief Executive Owl) and "janitor" of VR studio Owlchemy Labs (creators of HTC Vive, Oculus Touch, PlayStation VR triple-platform Job Simulator, and Rick and Morty: Virtual Rick-ality), relayed the story of building the company, his first Aha! moments with virtual reality, and how the company was acquired by Google and Alphabet in 2017. He also shared practical design tips for developing games in this virtual medium. Schwartz plays an active role in the gaming and VR community by organizing and speaking at events around the world.

WPI IMGD students are in Boston for PAX East for the sixth year in a row. Students on the annual PAX East IQP team have been planning since B-Term for the tradeshow, including designing the booth, researching how they can improve the experience from the previous years’ events, and selecting games to display.

Having a presence at PAX is nothing new for WPI, and the university continues the tradition of showing student-created games at the conference. The WPI booth is equipped with Cintiqs, interactive touch screen technology that displays completed games students created during classes. At this year’s booth, students are inviting PAX attendees to play the student-created games and provide the game creators, who will be present at the booth, feedback on their work—a process that mirrors real-world game development.

The student-created games PAX attendees can play include Doldrum, Obliti, and Unseeable. Doldrum is an entertainment-based virtual reality game created to look and feel like the xylophone version of the popular game Rock Band. Obliti, a serious game, or a game that tackles social issues, is a graduate thesis project that takes players through the emotional ins and outs of depression. Unseeable, another serious game, was designed with a color-blindness filter and walks players through the perspective of someone who is color blind.

The first event of its kind, IMGD is teaming up with the Worcester Center for Crafts for the first Computational Craft Symposium, which will bring together researchers and practitioners from multiple  disciplines related to digital technologies and craft. The goal of the daylong event is to uncover open research problems and creative opportunities that lie at the intersection of traditional crafting practices and computer science, and define the boundaries of this emerging field of research and practice. The symposium will touch upon game design, computational quilt pattern generation, e-textiles, paper circuits, pysanky, and more.

Looking ahead for IMGD, director Jennifer deWinter says, “Our program always reflects the interest and strengths of our students and faculty, and next year looks to be even more exciting. Charlie Roberts, a live coding musician, is joining our faculty, we have more students going to Japan than ever before, and the Different Games conference will debut at WPI in October, bringing together the leading voices in cutting-edge game design from diverse designers. I can only celebrate the energy and dynamism of our faculty and students."