A concert of convergence will take place on Friday, Nov. 13, at 8 p.m. in Alden Memorial’s Spaulding Recital Hall. Boston’s Juventas New Music Ensemble will be performing experimental electronic music, including several pieces composed by Scott Barton. The group is beginning a residency at WPI, incorporating music psychology, a recording session, and this concert into their project. 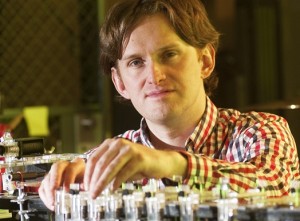 Barton, assistant professor music and director of the Music, Perception, and Robotics Lab, has been interested in the interaction of man, music, and machines through his career. He started writing music for synthesizers as an undergraduate, and moved into composing more challenging rhythmic pieces and computer programming while working on his master’s degree. Building musical robots as a PhD candidate gave him a chance to introduce a visual third dimension to his music. He says that seeing the robots react and respond to each other allows the audience to explore expression areas not standard in a concert arena.

The concert will highlight works for musical robots, and will feature an interactive section where the audience themselves will be involved in the composition and the performance. Through the use of smart phones and other interactive electronics, concertgoers will be able to contribute themes to the music in real time. The audience members will be networked to remote composers who will work concurrently, and then play the collaboration at the end of the performance.

The event will also be the showcase for the East Coast premier of a song cycle on genetic engineering by Los Angeles composer Alexander Elliott Miller and humanities professor Jim Cocola. According to Barton, interactivity allows artists and scientists to “explore the boundaries of our spaces, and to see how technology is shaping us.” The process of working together “changes our impressions of each other, and it may change the way we interact with the world,” he says.

A post-concert round table discussion on experimentation in the arts and sciences will be held, featuring musicians, robotics specialists, bioethicists, and biomedical engineers. Barton, Cocola, and Miller will be included in the panel, along with humanities professor Beth Eddy and biology and biotechnology professor Jill  Rulfs.