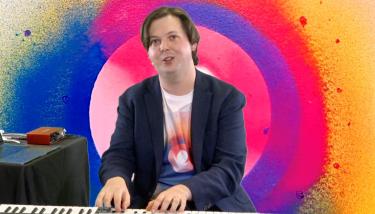 WPI Arts & Sciences Adjunct Professor David Ibbett says he’s happiest when he’s getting to the heart of scientific concepts and bringing them to life through the language of music. It’s a way of understanding the world that he teaches in his Music and Science course, and one that informs much of his own work.

That includes his latest piece, Black Hole Symphony, which will be performed in Hayden Planetarium at the Museum of Science, premiering on June 23 with repeat performances in July and August.

However, creating the music was by no means easy: The concert is the culmination of three years of work and features a live chamber orchestra and recorded electronic music, along with a narration and visual aspects, which are displayed on the planetarium dome.

Much like the performance itself, Ibbett’s composition method is also unique. He uses a process called “sonification,” which involves gathering data from black holes and their sounding phenomena—traditionally displayed as a graph—and designing an algorithm to convert this data to sounds. The central sonification for the Black Hole Symphony is based on the electromagnetic spectrum of an active galaxy containing a supermassive black hole. Professor Ibbett then embeds these sonifications in a larger musical piece that delivers an emotional and intellectual impact to the audience. “This is art that is not only made in conjunction with science, but it also helps to communicate and share the joy of science,” he says. 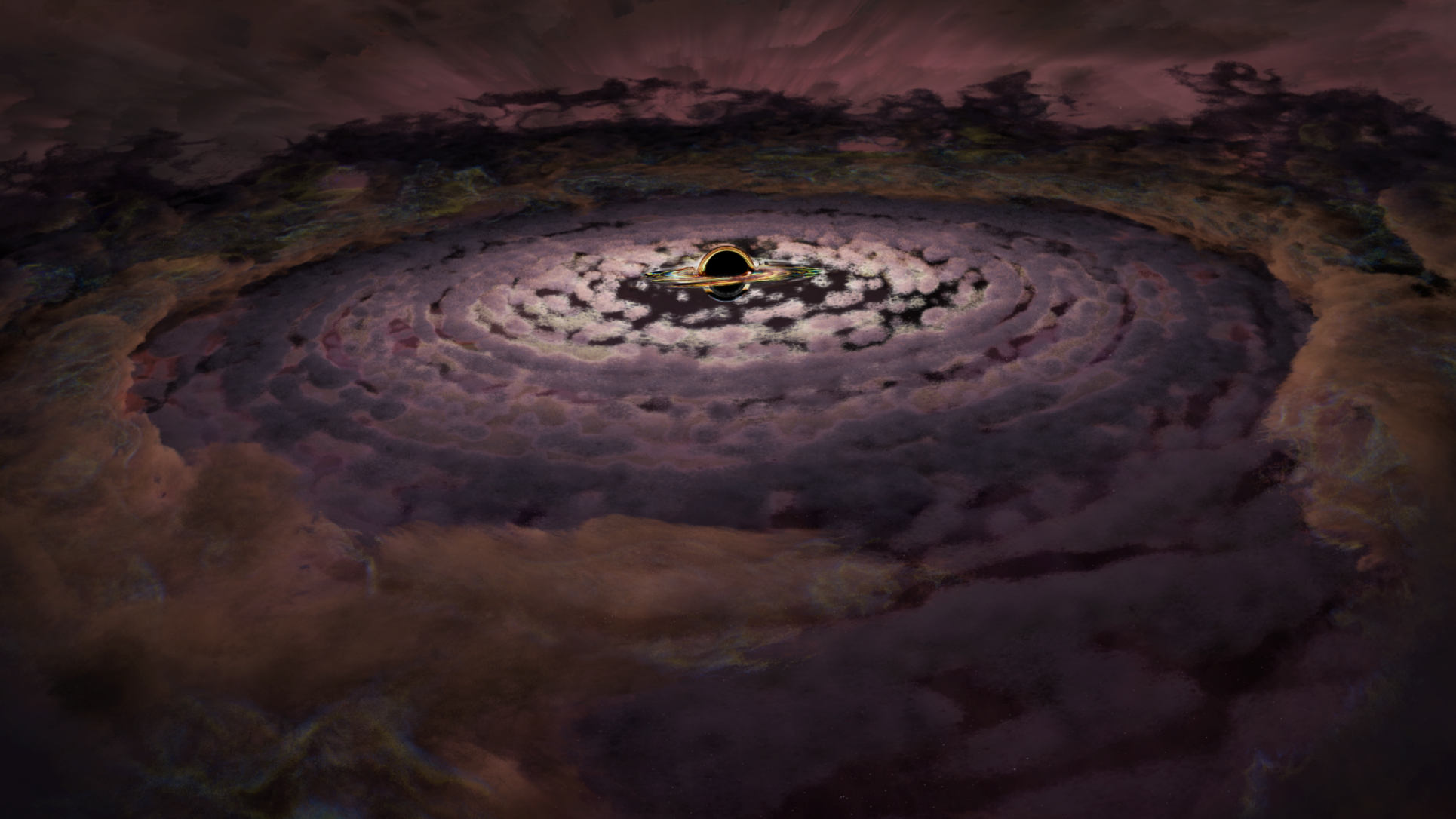 The Herd sat down with Ibbett to learn more about the Black Hole Symphony. (The following conversation has been edited for clarity and length).

How did the idea for this concert come about?

Back in 2017, I founded a nonprofit called Multiverse Concert Series that is a hub for these collaborations between music, art, and science.

Three years ago, I was introduced to Anna Barnacka, an astrophysicist at the Center for Astrophysics at Harvard. At that time, she was trying to sonify the jets of plasma from black holes. We discovered this shared interest of sonifying data to see if you can learn more about it by listening to it.

Soon, the idea of a narrative piece came together, and we thought about doing a symphony—the piece is a classical symphony at heart, with melodic themes and five movements.

The metaphor in the piece is that each component of the black hole galaxy is like a musical instrument in an orchestra, and the black hole is the conductor telling everyone what to do and influencing them, silently. 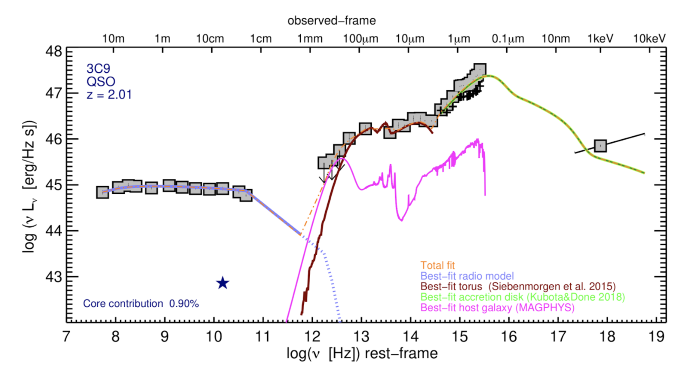 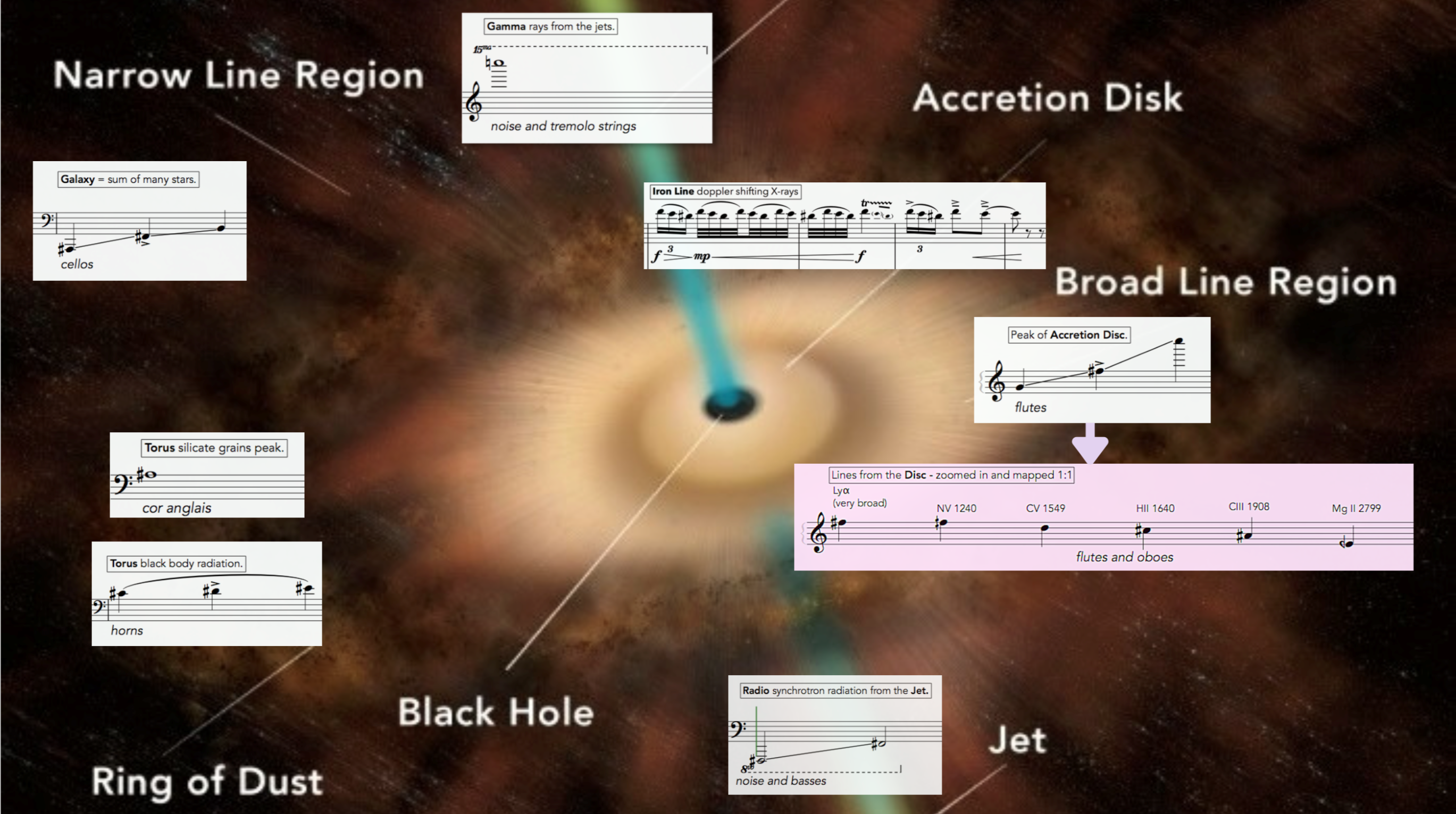 The metaphor in the piece is that each component of the black hole galaxy is like a musical instrument in an orchestra, and the black hole is the conductor telling everyone what to do and influencing them, silently.

Anna and I spent a lot of time looking for ways that the music and science could connect to help tell the story.

Everything we know about black holes is indirect knowledge—it’s from telescopes working in bands of light that are mostly invisible to the eye. All these different sets of data come together to build a picture of what a black hole is really like. To help complete and communicate that picture, music can get involved.

There are things in the universe you could never get close enough to experience firsthand, so we can use the universal language of music to create an experience in the mind of the listener. Music has the capability to reach people and get straight through

There are things in the universe you could never get close enough to experience firsthand, so we can use the universal language of music to create an experience in the mind of the listener. Music has the capability to reach people and get straight through their filters—straight to the heart.

How did you compose the music?

The wildly fluctuating gamma rays around the black hole were the first scene we created. After that, through the process of sonification, we created the black hole chord, which is the musical representation of all the light that you can collect from a black hole galaxy.

Black holes are not just a void, they’re surrounded by all these interesting phenomena—the famous accretion disc, as well as broadline clouds and dust torus. They shine in colors that are way beyond what the human eye can see, but what I like to do is say “we can’t see it, but can we use our ears?” Each note of the black hole chord is associated with a unique structure around the black hole.

How has your experience at WPI influenced your work?

There’s real interest for making connections between science and music at WPI. This was the second year I taught the “Music and Science” course and I’ll teach it again next year. There is a lot of inspiration at WPI, and when I’m on campus I try to meet as many other faculty members as possible and try to cook up these sorts of projects.

At its heart, science is appreciating the world as it really is and learning more about where we are and who we are, and the same can be said of art and music.

What’s next for the Black Hole Symphony?

We plan to take the Black Hole Symphony on the road—the concerts at the Museum of Science are the beginning of a journey, and we want to take the piece out to domes and planetariums around the country.