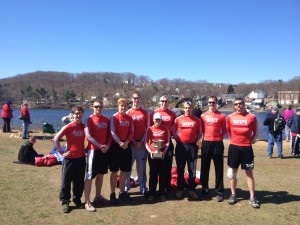 The WPI men’s rowing excelled Sunday, winning all three of its races during a home regatta on Lake Quinsigamond against Tufts, Vermont, and Skidmore. The victory over Tufts in the varsity eight gave the Engineers the right to the Baker Cup for the eighth straight season.