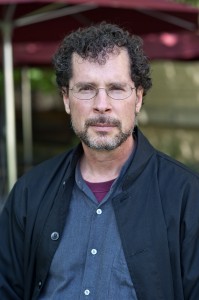 Centuries after knights crossed lances to defend their lands, WPI students are using their “creativity and technical ability to bring the (Higgins Collection of Arms and Armor) to life,” says Jeffrey Forgeng, adjunct professor in Humanities and Arts.

For 15 years, as curator at the Higgins Armory Museum, Forgeng has worked with teams of WPI students to explore digital technology in relation to the world-renowned collection amassed by Worcester industrialist John Woodman Higgins.

Last winter, after the armory museum closed its doors, the 2,000-plus pieces moved to the Worcester Art Museum, where Forgeng now serves in the same role as curator of arms and armor and medieval art. He was in charge of the transfer of the collection – the second largest of its kind in the Western Hemisphere, next to the Metropolitan Museum of Art in New York – from one museum to the other.

“I’m very glad to see it in its new home and safe and sound,” he says. “It’s gratifying to be at the other end [of that process].”

Forgeng’s own interest in arms and armor emerged in boyhood and reemerged after his interdisciplinary pursuit of medieval studies, first at Brown University and then as a doctoral student at the University of Toronto.

As he embarked on the academic job market, the perfect position appeared:  a joint position at WPI and Higgins that would require teaching at the university level as well as curating the museum’s collection. 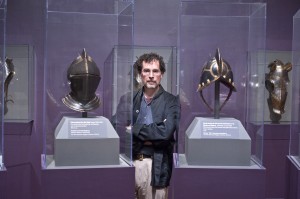 “It has been a great fit for both sides,” he says.  “I enjoyed working at the Higgins and I wouldn’t trade my engineers for anything. I love teaching engineers. They don’t assume they already know things. And I learn a huge amount from my students.”

He typically takes two teams of four each year, an optimal number, supervising them as they embark on IQPs that “push the envelope and try something new,” he says. “Making a stretch and being experimental has been an important part of the IQP process.”

Their work to date is represented in the Virtual Armory, an interactive website almost entirely created by WPI students. It includes a database of the collection as well as a virtual tour and behind-the-scenes highlights that include 3D models and mini-videos.

The “Explore-a-Battle” interactive blends pop-up explanations with an original woodcut from the 1499 Battle of Dorneck; the Squire’s Challenge combines gaming and information, teaching players to identify different elements of arms and armor.

This year’s two teams are already set, and arrangements are under way to continue the armor-academy collaboration, albeit from now on between WPI and WAM. 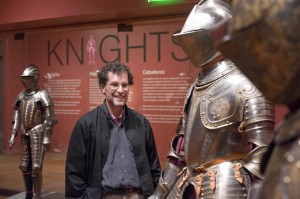 “It’s an honor to have someone not only with [Jeffrey Forgeng’s] skills and talents in arms and armor but also his incredible track record in his working collaboration with WPI,” says Jon Seydl, director of curatorial affairs at the art museum.  “One of our core audiences includes university students, and it is fantastic to have someone with his capacity to relate to lots of different students, to bring someone in with these relationships right out of the gate.”