On Tuesday morning, Aug. 26, a New Student Orientation panel on humanities and arts at WPI began appropriately with a lesson in history. An audience of hundreds of first year students was treated to an introduction by a special guest dressed as WPI’s founding father, John Boynton. 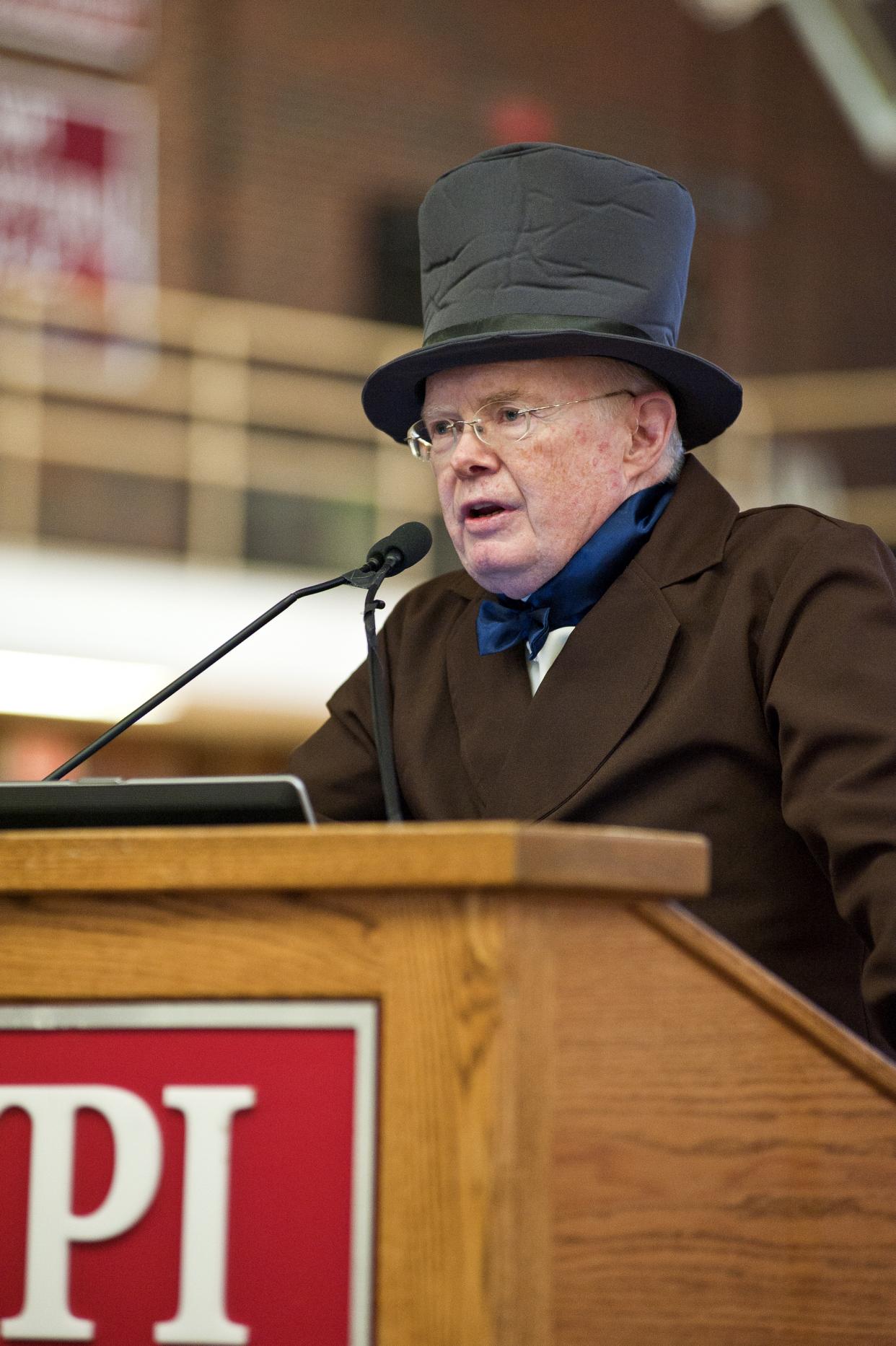 WPI board chairman and former interim
president Phil Ryan ’65 took on the role of
WPI founder John Boynton in praising the
university for its commitment to humanities
and the arts.

Wearing a Victorian coat and top hat, the 223-year-old Boynton spoke about the many ways in which the world and WPI have changed since he co-founded the institution—then called Worcester Free Institute of Industrial Science—in 1865. He applauded the school for enrolling increasing numbers of women, marveled that a “new invention called the aeroplane” makes it possible for students to alight in places across the world, and inquired about the booming business of manufacturing wire for women’s hoopskirts.

Taking on a more serious tone, Boynton also emphasized one thing he was glad to see retained in WPI’s 150-year history: its commitment to liberal arts.

As Boynton described, even though he had grown up as a farmer and later became a successful tinware manufacturer, he had always seen the value of learning humanities and arts. He believed that anyone, no matter their profession, could benefit from a liberal education, and should have access to it.

“In my day, only the sons of ministers, doctors, and lawyers were admitted to liberal institutions like Harvard—certainly not plain people like me,” Boynton told the audience. “But I thought that we could make a lot out of an education like this. It would enrich our lives, engage our minds, and give us a wider perspective that could help in our work as scientists, engineers, and business people.” 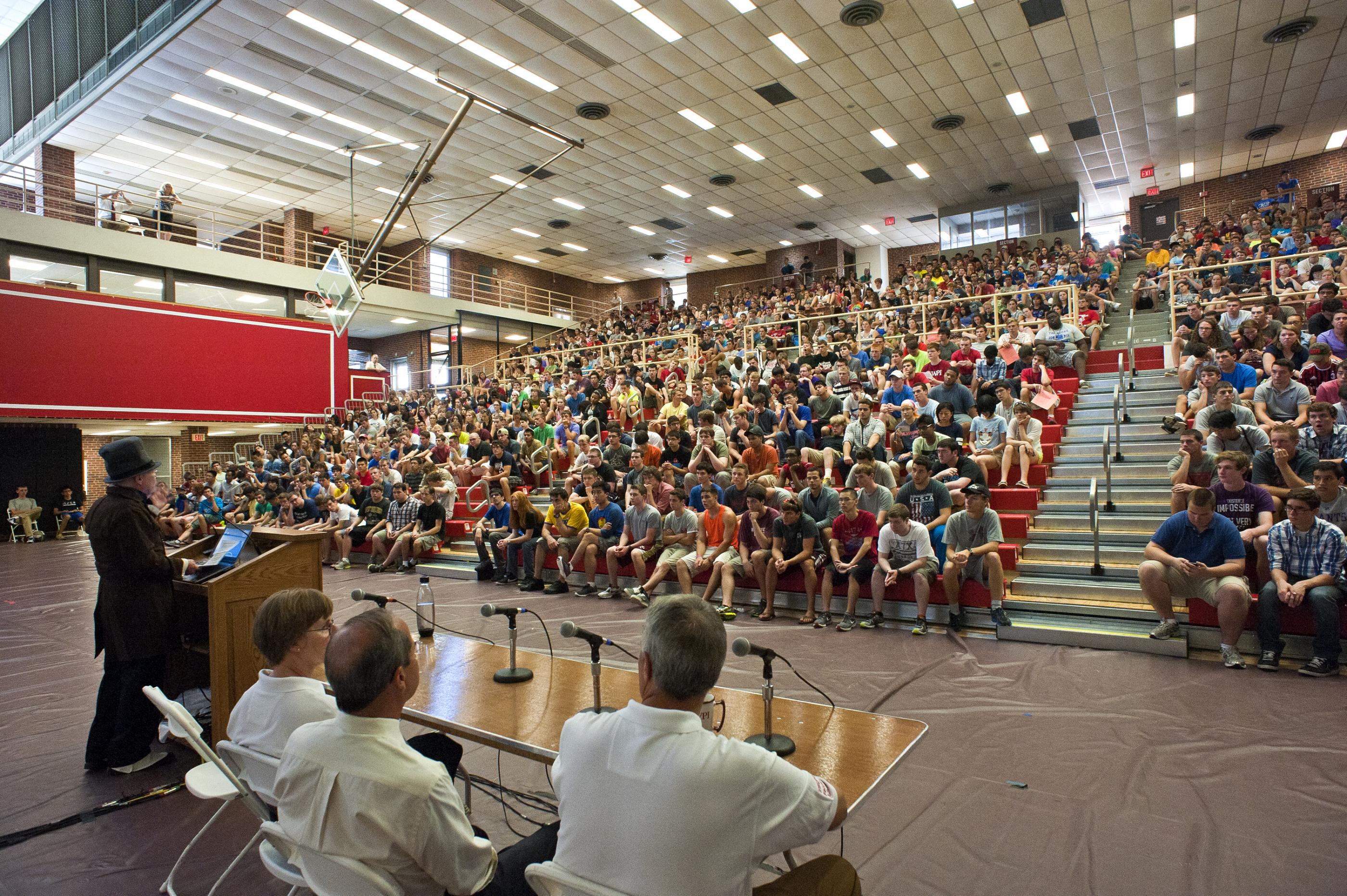 Boynton discussed how he was able to make this vision a reality when he co-founded WPI with Ichabod Washburn, a mill owner who wanted to create a place to train factory workers.

“While Ichabod promoted the very practical components of a mechanic’s education, I insisted we also include the classical components,” he said. “At Harvard they taught classical and modern language and literature, philosophy, religion, law, and rhetoric, as well as chemistry, physics, mathematics, and botany. By God, our students would have these same privileges, even though they also learned the practical trades in the Washburn Shops, which is right next to Boynton Hall.”

He continued, “These complementary visions have thrived at WPI for a century and a half. As I look around today, I can see that they have gone well beyond two physical towers, extending to 40 project centers around the world and impacting the lives of millions of people.” 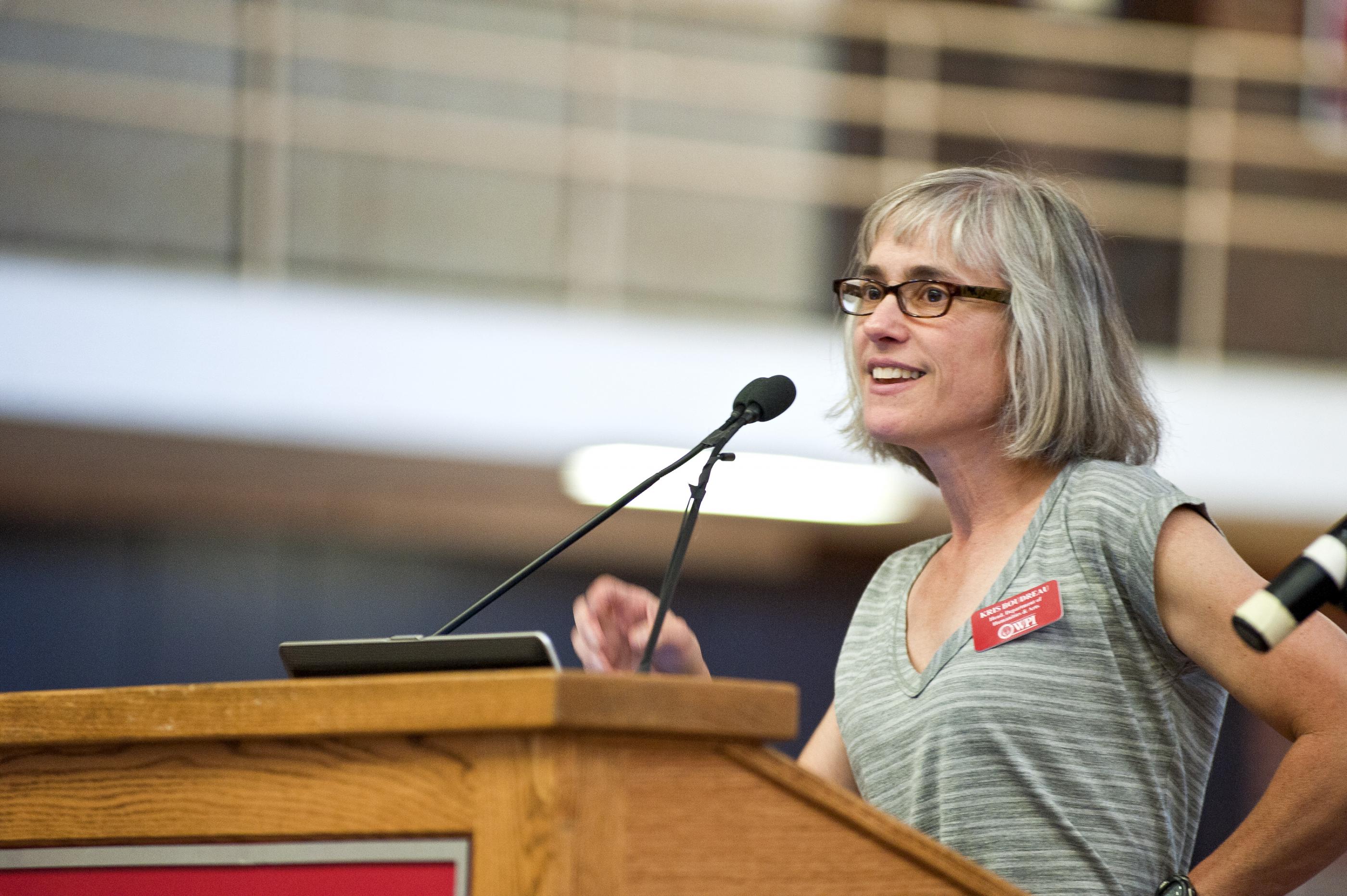 All three faculty members spoke passionately about how HUA has impacted their careers and lives, from enabling them to present their research findings clearly, to helping them understand how their work affects different groups of people—enriching their personal lives through activities such as singing, traveling, reading, and acting. They encouraged students in all majors to explore their interests, and broaden their horizons, by taking courses in humanities and arts.

At the end of the session, associate dean of humanities and arts Kristin Boudreau called Boynton back to the podium and revealed that he was none other than Phil Ryan ’65, chairman of the WPI Board of Trustees and former interim WPI president. Dressed in plain clothes, Ryan extended a welcome to the class of 2018 from the Board and talked of his excitement at portraying one of WPI’s illustrious founders.

“When I was asked to play John Boynton in honor of WPI’s sesquicentennial, I jumped at the chance,” said Ryan. “I’m glad to see that his vision for a liberal education is alive and thriving today.”