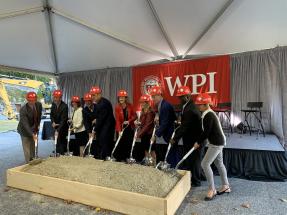 “Breaking ground for this new and important building illustrates the lasting positive impact philanthropy has at WPI, especially as we continue to build momentum for WPI’s next major fundraising campaign,” says William J. McAvoy, senior vice president for university advancement. “We are deeply grateful to George and Karen Oliver, the Alden Trust, and so many other trustees, alumni, and friends who have stepped forward as inspiring leaders in this key phase of the new campaign.”

The building is a remarkable nod to the emerging Fourth Industrial Revolution.  It creates space for experts in areas such as data science, robotics, cybersecurity, autonomous vehicles, interactive media and game development, learning sciences and technology, bioinformatics, computational biology, neuroscience/engineering, architectural engineering and smart design to work together—and with partners from industry, governments and academia—to develop “smart” solutions to some of the planet’s most pressing problems in health, energy, transportation, and smart buildings and infrastructure.

It’s a concept that people want to support...

The George I. Alden Trust, one of the university’s most generous benefactors, pledged a $5 million leadership gift to the facilities component of WPI’s new fundraising campaign if the university raises $20 million from current trustees and alumni by March 31, 2021 —stipulating 100 percent trustee participation.

“WPI’s trustees believe in the mission of this institution and they are behind this campaign, in word and deed,” says Jack Mollen, chair of WPI’s Board of Trustees and retired executive vice president of Human Resources at EMC Corporation. “We are close to achieving one part of the Alden Trust’s challenge, with nearly full board participation in the campaign—a goal we will reach very soon. I am pleased that we are also nearing the $8 million mark in trustee gifts to facilities. Our trustees are leading in their generosity and commitment to this university.”

Established by George I. Alden, the Trust supports capital projects in four focus areas, including higher education. WPI’s first professor of mechanical engineering, Alden taught at WPI for nearly three decades in the mid to late 1800s, served as the head of the Mechanical Engineering Department, and twice served as interim president of the Institute. He was a man of the Industrial Revolution, an inventor and prominent industrialist whose influence and achievements still reverberate through the city and the region today. Gifts from the Alden Trust to WPI also created Alden Memorial and the Alden Life Sciences and Bioengineering Educational Center in Goddard Hall.

“The Trust aims to help WPI continue to build its culture of giving with this latest challenge,” says Warner Fletcher, chair of the Alden Trust and WPI trustee emeritus. “We have seen the WPI community be exceptionally dedicated to the mission of this institution and remarkably generous when it comes to helping the university achieve an even greater positive impact on the world. That’s what Professor Alden was all about, and it’s wonderful to see his vision for philanthropy and education continuing to thrive here at WPI, in Worcester, and beyond.”

Longtime, dedicated supporters of the university, George and Karen Oliver, both 1982 graduates of WPI, have committed a generous seven-figure gift to this project. George Oliver is chairman and CEO of Johnson Controls International and a WPI trustee.  Karen Oliver leads the Women’s Impact Network Executive Committee, WPI’s women’s philanthropy group. Annual donors to the university, the Olivers are members of the 1865 Society, which recognizes those who have contributed $1 million or more in lifetime giving to WPI; they are also members of the Alden Society, which recognizes those who have made planned or endowed gifts to the university. They were early supporters of the Foisie Innovation Studio, and the Oliver Active Learning Classroom was named in their honor.

“This building will help WPI better assist students throughout their time here,” said Philip Clay, Vice President of Student Affairs. “It will also improve navigation and accessibility from Boynton Street to the top of WPI’s hill, which will be especially meaningful to the eastern residential area, and academic programs and centers at Gateway Park.”

An embodiment of WPI’s values of sustainability and environmental stewardship, the 100,000-square-foot facility is expected to open in January 2022, and will include classrooms, labs and studios, faculty offices, and student support services.  Designed by Boston-based architectural firm Gensler, it will be built by Consigli Construction Co., Inc, headquartered in Milford, Mass, and KVA Boston will manage the project.

This new facility offers many opportunities for WPI alumni, parents, and friends to make an impact with their philanthropy, including a special opportunity through a challenge grant from the George I. Alden Trust. To learn more, contact Donna Stock, assistant vice president of leadership giving for University Advancement, at dstock@wpi.edu or 508-831-6073.