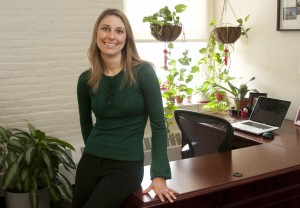 When Jeanine Skorinko first came to WPI, her position in the Social Science and Policy Studies department presented not only a new career opportunity but a chance to “invade” her siblings’ lives. Her brother graduated from WPI in 2005 as her sister was finishing her freshman year, so when Skorinko took on the challenge of starting the first human participant lab and helping revitalize the psychology program, she became the third member of her family to make her mark on WPI. And she certainly has—by contributing significantly to its reputation as the site of serious psychological research through researching with students and hosting the 2012 meeting of the New England Psychological Association. The event boasted over 600 attendees and featured presentations from several WPI undergraduates, whom, she notes, are “very talented and well-trained. In fact,” she says, “Satia Miller ’12 was one of only six students awarded the NEPA Honorary Undergraduate Scholar award.

After graduating from Rice University with bachelor’s degrees in psychology and anthropology, Skorinko went on to receive her social psychology PhD from the University of Virginia. As an undergraduate, she had the chance to work as a research assistant in the social psychology lab of Mikki Hebl and fell in love with the field. “I loved getting to work on research projects dealing with stigmas and stereotypes—I even got to wear an obesity prosthesis for several studies both in the lab and at a local mall,” she says. During her senior year, she conducted two experiments, enthusiastic about the opportunity to empirically investigate the questions that interested her.

This research experience has come in handy during Skorinko’s time at WPI, during which she has taught several psychology courses, joined the Committee on Advising and Student Life, and become director of the Psychological Science program. The latter position has led her to develop and expand the program through introduction of new classes spanning topics such as Psychology of Gender and Developmental Psychology and providing students with opportunities to be involved in two or three research projects by the time they graduate—a prospect available only to first year graduate students at most institutions. She also developed a Psychology Lecture Series, which has brought researchers from throughout 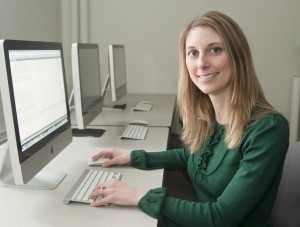 New England to present their findings to WPI students and faculty, and started career workshops geared toward psychology majors and minors. Additionally, she is an associated faculty member in the Robotics Engineering program and is involved with groundbreaking projects, such as a robot designed to aid people with disabilities. Skorinko also notes, “I’ve been involved with developing a more structured informal robotics learning curriculum, and understanding how students engage in the program and how it may increase underrepresented groups in STEM.”

Among her other areas of interest, Skorinko is excited about the research she conducts with undergraduate students in the Social Psychology Inquiry Lab. She notes that the work conducted there deals with environmental influences on behavior and relationships, stigmas and stereotyping, and cultural orientation from both theoretical and applied perspectives. In fact, Skorinko’s incorporation of empirical research into the psychology curriculum was integral to her receipt of the 2012 Romeo L. Moruzzi Young Faculty Award for Innovation in Undergraduate Education. She says, “Working with students on research is my favorite part of the job. I love showing up to a lab meeting and being able to talk research with them, and I love watching  them grow and develop as critical thinkers and empirical researchers!”