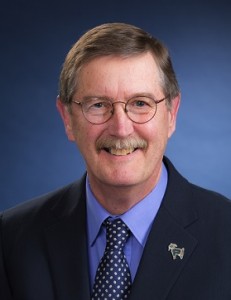 Wesley T. Mott, professor of literature in the Department of Humanities and Arts, will receive the Chairman’s Exemplary Faculty Prize for 2015–16 at Commencement on Saturday. Mott, who is one of the foremost scholars of the Transcendentalists, is the first recipient in a non-technical field since the award was established in 2007. The prize, in the amount of $10,000, recognizes faculty members who excel in all relevant areas of faculty performance, including teaching, research and scholarship, and advising.

“This is a great recognition for our department and many of my colleagues there who are equally qualified. It’s also nice to be recognized by those on the committee who are in the technical fields,” says Mott. “I have received honors from the Emerson and Thoreau societies, but there is nothing like being honored by your colleagues,” he adds.

According to the citation for the prize, Mott was selected for “his widely acclaimed scholarship on one of the most important eras in American literature, his efforts to inspire and challenge students at WPI through his innovative teaching and project advising, and his dedicated service to his profession and society.”

“I have received honors from the Emerson and Thoreau societies, but there is nothing like being honored by your colleagues.”       – Wes Mott

Mott has edited and published works on Emerson and in 1989 he founded the Ralph Waldo Emerson Society. He launched the society’s newsletter,Emerson Society Papers, which he published for 20 years at WPI.

In his scholarship, Mott, who received WPI Board of Trustees’ Award for Outstanding Research and Creative Scholarship in 1993, has ranged beyond Emerson, publishing papers and books on Thoreau, Hawthorne, Melville, and other writers whose work constituted the American Renaissance. His work has won him praise and recognition, including the Thoreau Society’s Walter Harding Distinguished Service Award.

In the classroom, Mott has enjoyed bringing the Transcendentalists to life for his students.

“The Transcendentalists have a reputation for being remote and abstract. But no one is easier to teach to [young people],” says Mott. “The questions they ask are the same we ask in every generation: Who are we? Why are we here?” 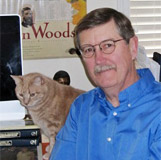 Wes Mott with his cat, Harry.

“It’s actually easy to teach him, because he was a civil engineer,” surveying and mapping the area of Walden Pond. He was also a chemical engineer, using plumbago, a naturally occurring soft carbon, in his family’s pencil-making business, as well a mechanical engineer, because he also made the pencils, says Mott.

“I think Thoreau works very well for engineer students,” he says, adding that he might not have explored that aspect of Thoreau’s life had he not come to teach at WPI.

With WPI’s proximity to Walden Pond and Mott’s position as advisor to Omicron Iota, WPI’s chapter of the Alpha Phi Omega national service fraternity, he has been able to offer IQPs and Independent Study/Projects to students that blend literature and history with environmentalism and civil engineering, focused on efforts to save Thoreau’s Walden Woods from development.

“Working with the students to build toward the success of that project has been especially satisfying to me,” he says.

The tradition of awarding the Chairman’s Exemplary Faculty Prize was established in 2007 through the personal philanthropy of Donald K. Peterson ’71, then chairman of the WPI Board of Trustees. It was continued this year by current board chairman Philip B. Ryan ’65.