WPI professor marries astrophysics and music in a debut album composed according to the molecules and color spectra of exoplanets.

Humankind has always pondered the question, “Is life sustainable on other planets?” 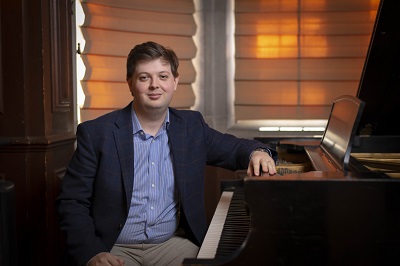 If music is a clue, David Ibbett, adjunct teaching professor of Arts & Sciences, can tell you the answer.

Ibbett’s first album, Octave of Light, which will be released in the fall, was sparked by this question, and tells the stories of exoplanets—planets that orbit a star outside of our solar system—through composed music. The music, which features Ibbett on piano and electronics, soprano Beth Sterling, and violinist Amelia Sie, is written to audibly illustrate molecules, such as water vapor, methane, and oxygen, found on these exoplanets. “These are some of the elements that can indicate the presence of life,” Ibbett says. “They can help us determine if a planet has the potential to support life as we know it.”

How exactly do you compose an album with exoplanets?

The short answer is by transposing color and light into sound.

In the last 10 years researchers have discovered over 4,000 exoplanets, mostly via the transit method, which shows the exoplanets as shadows as they cross the star they orbit. Each shadow has colors, or a spectrum, and the spectrum tells us which molecules are present in the exoplanet’s atmosphere—such as water or sodium. “We can’t see these colors directly,” Ibbett says. “They’re too broad in frequency range for our eyes to perceive, even if shifted to visible range. But we can turn their wavelengths into sound through sonification [the use of non-speech audio to perceive data]. We can hear more than we can see."

Although humans can see only one "octave" of color—one doubling of frequency, they can hear up to 10 octaves of sound. This means that we can hear a much wider portion of exoplanet light spectra that we could ever see with our eyes—although their frequencies need to be transposed down into audible range, he says.

In the final step, Ibbett rounds the frequencies to the notes of a piano. “I chose a piano because it’s an instrument people know very well,” he says. “Sacrificing a small amount of frequency resolution to fit the spectra onto the piano means we can enjoy them in a familiar musical setting.” He creates chords based upon the natural dips detected in an exoplanet’s spectra (illustrated below). “The more complex a molecule is, the more complex the chord is,” he says.

All of Octave of Light is written like this, including the first piece called Water Romanza, which is based on the notes of a water vapor spectrum. Some of these notes are found in other pieces on the album, too, such as Wanderers. This piece is based on the spectrum of exoplanet “WASP 39-b,” which contains some of the notes from the water vapor spectrum—signifying the presence of water vapor in the planet’s atmosphere. Get a sneak peek of Water Romanza here.

The album marries together Ibbett’s two loves, music and science. “My father is a chemical scientist—I grew up going to his labs,” he says. “My mother is a piano teacher. My

work always looks to connect the two fields. My passion for each is the same. It helps us discover parts of our world and ask questions.”

Ibbett hopes listeners will be inspired to ask more questions about their own planet once they get their ears on Octave of Light. “The goal is to create music that’s engaging, and celebrates the wonder of the universe,” he says. “I want it to show both the beauty and the complexity of nature as it is revealed by science. If we can experience that beauty in our world, we will be inspired to preserve it.”

While Octave of Light is set to drop in November—premiering at the Boston Museum of Science planetarium—it will always be a work in progress, and something for people to enjoy for years and years. “That’s because new exoplanet research comes out all the time,” Ibbett says. “The exoplanet database is constantly being updated, as are the elements on these planets that can help us determine if they have the potential for life.”

Ibbett will be sharing his expertise with students in a practicum called "Music and Science" during D term 2021.