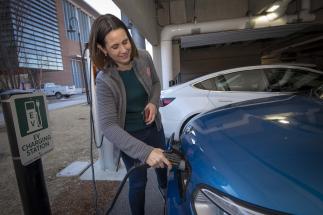 Over the past year electric vehicle charging stations have saved over 25,000 kilograms of estimated carbon emissions

In line with its commitment to support a range of sustainability initiatives, WPI continues to increase capacity for electric vehicle charging on campus.

The initiative fits into the university’s Sustainability Plan—representing the culmination of just over a year of work by a dedicated group of faculty, staff, and students from across campus—by supporting the use of an alternative to gasoline-powered vehicles. Electric vehicles, or EVs, help reduce carbon emissions, says associate professor of civil and environmental engineering and director of sustainability Paul Mathisen.

“It is well known that conventional motor vehicles are a primary contributor to greenhouse gases, which, in turn, cause climate change,” Mathisen says. “Over the years, the Office of Sustainability has brought options to campus that would decrease SOV (single occupancy vehicle) usage and increase alternative forms of transportation.”

Liz Tomaszewski, WPI’s associate director of Sustainability, has been working to increase electric vehicle charging support for EV drivers for nearly a decade. The first electric vehicle charging station was installed at Goddard Hall in 2012 as a result of an initiative of the Massachusetts Department of Energy Resources, Electric Vehicle Infrastructure Grant, Tomaszewski explains.

“The intent of the grant was to encourage the creation of electric vehicle infrastructure throughout the state,” she says.

WPI, Clark University, and the town of Lancaster were recipients of incentives for the state initiative. In 2013, with the completion of the Park Avenue garage, WPI relocated the charging station from Goddard Hall to the garage, and installed two additional stations. 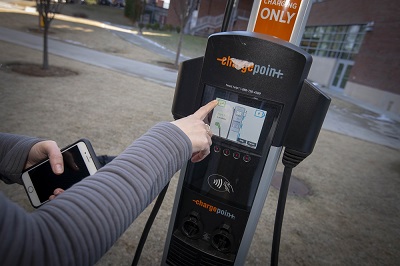 In 2017, WPI upgraded the three electric vehicle charging stations to the newer 4000 series chargers and created an “EV Charging Etiquette” page on the Sustainability website to provide charging guidelines, including a guideline for drivers to limit charging to a maximum of four hours. The Office of Sustainability also created an email alias, as a convenience for EV drivers on campus, to facilitate communication about charging issues and concerns. “We currently have 25 WPI community members using the EV email alias,” Tomaszewski points out. “But, there may be some additional EV owners at WPI who have not signed up for the alias.”

The availability of electric vehicle charging stations on campus was a deciding factor for WPI employee Jaime Dillon when she purchased her Kia Soul Electric, two years ago. “The availability to charge while at work made the decision to go fully electric more feasible,” she says. But as more electric vehicle owners vied for limited charging spaces, it became harder to find an open station. The new charging stations have alleviated the shortage, at least for now, she says.

“There's an adequate number of chargers, for now,” Dillon says. “The number of electric vehicles here is likely to rise as there are more and more made.”

In 2019 it became clear that there were capacity issues for charger usage. “It was not unusual to see emails from EV drivers asking other EV drivers to move their cars so that they could charge up before their commute home,” Tomaszewski says. “In response, the Office of Sustainability researched incentives for charging station equipment and installations and found a National Grid incentive that would meet our needs.”

The Facilities Department identified the ideal location for new stations based on both convenience and installation cost, and after initial applications were submitted to National Grid in June, the final application for five dual charging stations was submitted and approved by National Grid in November. Installation was completed in the Gateway Garage at the end of 2019.

The cost of installation after incentives was $24,000.

“There are two ports on each charging station, and we request that EVs drivers charge for no more than four hours, which should provide a full charge,” says Tomaszewski. “So two cars can charge at a time, and four cars can charge during normal business hours if drivers are observing the rules of etiquette.”

WPI’s Sustainability Plan also supports other alternative transportation initiatives, according to Mathisen, including the Zipcar program (which offers a significant discount to staff, students, and alumni) and the ride-sharing service CarpoolWorld.