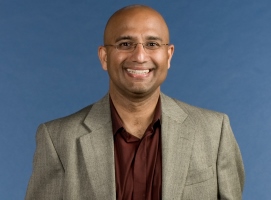 Researchers at Worcester Polytechnic Institute (WPI) and the Salk Institute for Biological Studies have discovered the neuronal basis for the apparent loss of smell in aging worms, illuminating a process that may be relevant for other age-related neurodegenerative conditions.

The team reported their findings in the paper “Circuit mechanisms encoding odors and driving aging-associated behavioral declines in Caenorhabditis elegans” published September 22, 2015, in the journal eLife.

“We found that the worm uses a more complex circuit of neurons to process odors than previously thought,” said Jagan Srinivasan, PhD., assistant professor of biology and biotechnology at WPI and co-author of the paper. “Over time that circuit does not work as effectively, so the older worms were still sensing odors in the environment, but they could not process the information into a behavior. To use an analogy, the older worms could still smell breakfast cooking, but they couldn’t find their way to the kitchen to eat.”

The report in eLife is the first publication flowing from a growing collaboration between Srinivasan and Sreekanth Chalasani, PhD, assistant professor in molecular neurobiology at the Salk Institute Laboratory, the corresponding author of the new paper. The scientists first met in 2003 at a “worm meeting” when they were post-doctoral fellows and found they had similar research interests. Now that both have established their own academic labs and use the worm Caenorhabditis elegans (C. elegans) to probe basic questions of neurobiology, they are working together on several projects.

“We are taking a systems view of neuroscience, trying to understand neuronal activity and cellular memory as a process that drives behavior,” Srinivasan said.

C. elegans is a nematode found in many environments around the world. An adult C.elgans worm is about 1 to 2 millimeters long and has approximately 1,000 cells. Despite its small size, the worm is a complex organism able to do all of the things animals must do to survive. It can move, eat, reproduce, and process cues from its environment that help it forage for food, seek out mates, or react to threats.

In 1998 C. elegans became the first multicellular organism to have its genome sequenced. The experience gained from that work was fundamental to the successful completion of the Human Genome Project. Furthermore, the entire lifecycle of the worm has been documented, from the initial fertilized egg cell, through development of the adult organism. Every cell division event has been tracked and the lineage of each generation of daughter cells mapped.

C. elegans has only 302 neurons, and since each one is already mapped, it becomes a powerful tool to study how neurons work together in circuits and networks to enable the worm’s metabolism. (The human brain is estimated to have 100 billion neurons.)

In the current study, the team focused on 12 pairs of neurons near the worm’s head that were known to process environmental cues and found that eight of them sense odors. Srinivasan used laser microsurgery to systematically disable those neurons, one pair at a time, within the living worm. Those worms were then put into a custom-designed microfluidic device along with a compound that smelled like worm food. The team at Salk measured the activity of the remaining six neurons in the worms as they detected the delectable odor and whether or not they moved deliberately towards the source of the food. (The video above shows calcium changes within the sensory neuron after stimulation with the food cue.)

The results showed that the eight odor-sensing neurons were divided into two groups with different functions in the odor response. They found “primary” neurons were connected to receptors on the worm’s body that received molecular cues from the environment. When activated, those primary neurons released molecules called neurotransmitters that were picked up by a set of “secondary” neurons, which in turn sent signals to active muscles and move the worm towards the food.

Surprisingly, the team noticed that as worms aged, the primary neurons continued to detect odors and release neurotransmitters, but the secondary neurons became less responsive. Furthermore, a worm’s performance on an odor sensing task was correlated with its longevity, with better performers living longer.

“Reduced or over-active neurotransmission is associated with many human diseases, so as we continue to study this in C.elegans, we hope to shed more light on the mechanisms involved and translate those findings in ways that could help people,” Srinivasan said.