After more than 40 years of wedding photographs, military celebrations, brutal New England winters, and general foot traffic, the red wooden footbridge in Elm Park had become a hazard. A 2013 inspection of the park’s iconic landmark led the City of Worcester to declare that it was no longer structurally sound, nor safe for the public to use. The wood used in the most recent rebuild was rotting, and because of the age of the supporting components, much of the bridge was beyond repair. 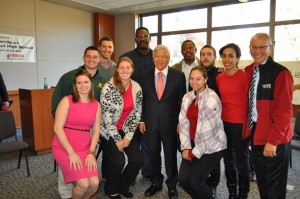 The city manager saw the situation as an opportunity to give students a real-world project, and a collaboration was proposed. WPI civil engineering students would be responsible for the new design of the bridge, along with its footing and connection points, while students from Worcester Technical High School would do the physical construction.

WPI students had already worked jointly on a project with Worcester Tech students—earlier in 2013 they had combined to design and construct a “net zero energy” house for the first Solar Decathlon competition in China. A relationship between the two institutions was reinforced.  Six Worcester Tech students and two faculty members traveled to China with the three-university, WPI-led team to reconstruct the house there for the competition.

The WPI Project Team took measurements of the Elm Park bridge in place, and did a condition assessment of the structure. This information was used to formulate options for the preliminary designs. The footbridge was removed from the park in several sections, then rebuilt at the Worcester Tech campus for investigative work and electronic diagnostic evaluation.

Because this was not just a replacement in kind, the project required further special considerations and research. Among the many challenges, the new bridge had to be architecturally functional in a similar limited space. It also had to have a design that reduced wood degradation and the potential for metal corrosion by more efficient drainage. Consultation with the Americans with Disabilities Act (ADA) determined that the existing bridge was too steep for modern-day use. The newly designed bridge would have to have less slope than the original, while still having adequate headroom underneath for skaters in the winter. Further, the Worcester Historical Commission asked that the new bridge be designed in a similar visual style as the old one, keeping its historical integrity intact.

The landscaping design around the perimeter also had to be reworked to accommodate the new bridge dimensions, and to improve the original area aesthetics.

“All of the students did a wonderful job. I am very proud of them!” said Professor Tahar El-Korchi, head of Civil and Environmental Engineering. “They took ownership of the project by defining the scope, managing the progress, doing the research on the various codes and standards covering the bridge, and coordinating all of the groups involved by giving weekly presentations.” The final design was submitted to a professional engineer for official city approval before being constructed.

There were many groups who had an interest in the safety, historical, and appearance aspects of the new bridge. A great deal of effort was put in to the coordination and communication among these groups.

One of these meetings was attended by New England Patriots owner Robert Kraft. The family of his late wife, Myra Hiatt Kraft, had deep roots in Worcester, and he wanted to honor her achievements in building bridges between various communities by naming the new footbridge in her memory.

Kraft came to both campuses to show his early commitment to the project, and surprised the Worcester Tech football team with his visit. He found that they were scheduled to play a difficult opponent in the coming week. He offered an incentive for a win—an invitation to watch his team play at Gillette Stadium.

The football team came through decisively, and 84 end zone tickets later, so did Mr. Kraft .… with memories that will last a lifetime.

The bridge opening ceremony is scheduled for Dec. 8 at 11 a.m. in Elm Park.