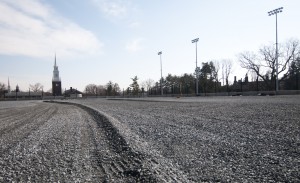 Had the planets aligned and weather gods cooperated, the varsity softball team would have played its last game of the season on the new fields atop the new parking garage.

But neither of those things happened, the snows came – and stayed – and the fields won’t be ready for play until summer.

“The weather hasn’t cooperated with us this year,” said Dana Harmon, director of Physical Education, Recreation, and Athletics. “Last spring it did, this spring it didn’t.”

That said, the project remains on schedule and should be completed by the end of May, according to Fred DiMauro, assistant vice president for facilities. It just won’t be ready in time for that last softball game of the 2013 season, as optimists on campus had hoped. 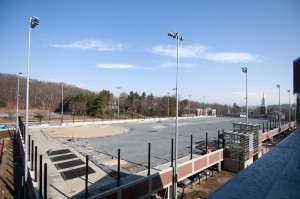 Besides providing a new home for the softball team, the new fields will be used by the varsity soccer and field hockey squads, as well as by club soccer, rugby, lacrosse, and ultimate Frisbee players. The baseball team will practice there, but play its games off campus. This year, Assumption, Holy Cross, Clark, and Wachusett Regional provided fields for WPI home games, and the school hopes to partner with Worcester State next season, Harmon says.

The new fields, which sit on top of the 525-space parking garage that opened in January, will give WPI first-class facilities and much needed room for its varsity and club sports. The synthetic turf will withstand traffic and weather that natural grass cannot handle, and lights will extend playing time into the evening.

“We’re trying to maximize our space and our resources,” Harmon says. “It’s really hard in an urban setting to find enough space for students to recreate. We’re thrilled with the concept.”

The $22 million parking garage/fields project is unique for the area, as only Providence College has one (and is building another), and Boston University has a similar project in the works. 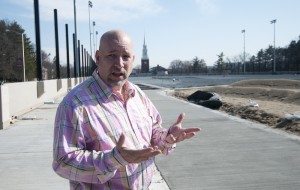 While parking garages do not qualify for national Leadership in Energy and Environmental Design status, the WPI project is packed with green features. It has a plug-in station for electric cars, designated spaces for Zipcars, and a covered bicycle parking area complete with a fix-it station and tools.

Recently, workers were putting in sand and clay for the softball infield, and foundations for the batting cages, bullpens, and dugouts have been installed. The field will also feature a 30-foot-high backstop and a portable fence; 20-foot-high netting will surround the complex of fields.

Underneath, there will be two locker rooms for visitors, concession stands, and public restrooms that can also be accessed from the football field and track. DiMauro says trees up to 20 feet tall will be planted to replace those that were taken down along Park Avenue.

Eventually, a pedestrian bridge from the fields to the back of Harrington Auditorium will connect the project to the center of the campus.

Harmon and DiMauro are proud of how WPI got double the use out of a single piece of land.

“I’m really glad that the university went down this path,” Harmon says. “We could have easily just replaced the fields.”

Just don’t tell DiMauro that WPI built a parking garage and, as an afterthought, decided to put fields on the roof.

“We didn’t design a garage with fields on the top,” he said. “It was the other way around. It was truly driven by the recreation and athletic needs.”